ANSI Will Only Investigate Itself If You Pay Them 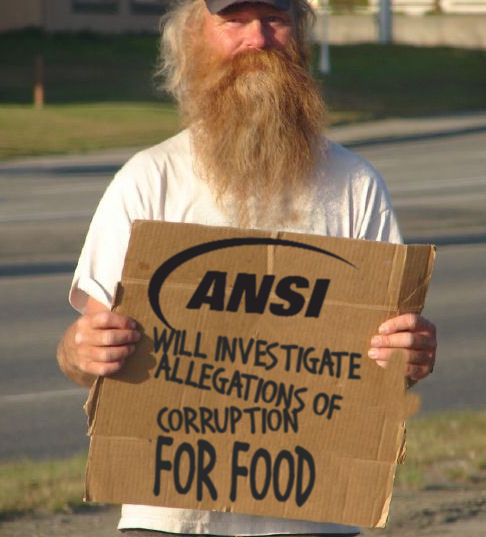 It would be remarkable if it weren’t so absurd: ANSI is really sticking to its guns on demanding “procedures” be followed before it launch any investigation into misbehavior by its TAGs, such as the US TAG to TC 176. This includes allegations of actual crimes, such as the potentially illegal fundraising the TAG did for an event that never materialized, prompting questions about what happened to the money, or the potential FTC violations carried out by TAG administrators. Despite being told time and time again that the law will not accept as a defense that ANSI failed to act because the report wasn’t printed on the right paper, ANSI refuses to consider the allegations unless a formal request is filled out. Worse still, they are demanding a $1200 filing fee before they will consider any such allegations and look into them.

Think about that. Let’s say you witness a crime, perhaps a bank teller stealing money from the bank’s till. You report it to the bank manager, and they refuse to call the police or to conduct an investigation unless you pay them $1200 and fill out some complicated forms. Until then, they insist, the crime never actually occurred. What does that make it look like? Well, that the bank manager is in on it, of course, and he’s hiding behind “procedures” to delay any actual investigation.

Who’s to blame? Meet Anne Caldas, ANSI’s Senior Director of Something or Other, and the point of contact for the official ANSI appeals process. I alerted her to possible FTC and IRS violations by the US TAG 176 some time ago, and she doggedly refused to investigate, saying that the only possibly way that ANSI would get involved is if first the US TAG was notified — through an official complaint — and then only if the TAG’s resolution was found to be insufficient. At that point, an official appeal with ANSI would have to be filed, with a filing fee of $1200, before ANSI would get involved. Which means, ANSI is completely fine with having themselves exposed to potential criminal liability and litigation until someone files the right paperwork.

So, I filed the official complaint against the TAG with the TAG. I specifically required TAG Administrator Jennifer Admussen to recuse herself, since she’s named in the complaint. You may recall it was Admussen who wrote emails to the NY Metro ASQ section trying to have me removed as a speaker, and intentionally minimized my credentials in order to make me appear less credible than her preferred speakers, the US TAG 176 leaders. Admussen not only didn’t’ recuse herself, she processed the complaint and then found she and the TAG had done nothing wrong. No surprises there.

Admussen then went on to ignore the evidence presented in the appeal, and had the audacity to claim the TAG had done nothing wrong since the complaint included no evidence. This is the bureaucrat’s version of putting one’s hands over one’s ears and shouting “I can’t hear you!” She then ignored entire portions of ANSI procedures, when it suited her to do so, while quoting the same procedures at other times, when it was beneficial. This selective cherrypicking is overt, and indicative of a deeply flawed appeals process.

So having exhausted that step, I again approached Caldas and asked if I really needed to “bombard them with paperwork” and waste everyone’s time, or if they would do the right thing and launch their investigation based on Admussen’s conflicted response. Once again, despite allegations of crimes, Caldas refused, citing yet again those arcane ANSI procedures and demanding I pay them $1200.

Meanwhile, through it all, ANSI CEO Joe Bhatia remains silent.

I advised Caldas that the courts are not going to accept as a defense against a criminal allegation that the “proper paperwork” wasn’t signed, and put ANSI’s general counsel Patricia Griffin in the loop. I’d love to be a fly on the wall hearing those conversations they’re having now. I’m furthermore preparing to file a complaint with Griffin invoking ANSI’s whistleblower policy, which it appears Admussen and the TAG has openly violated. For example, US TAG favorite George Hummel publicly called for a boycott of my company and called me a “shit thrower,” for which he was not only not sanctioned, but after which former TAG Alka Jarvis continued to reward Hummel with appearances alongside her at speaking events.

Sure, that’s not criminal, but it is a clear violation of the ANSI whistleblower policy, even if it’s one of the milder examples. I just like publishing that bit because it shows the depths of what TAG leaders like Hummel will resort to, in public, without any filters. Plus it’s fun to see a guy who’s older than me still using his High School photo on LinkedIn.

The bad news for ANSI is not only that this makes them look (a) guilty and (b) more guilty, but that it keeps the clock running on the statute of limitations. This is likely to end up in court one day (not necessarily with me as the plaintiff, mind you, since there are a few sharks circling the waters), and the first thing their lawyers are going to do is try to have it thrown out on that technicality. The longer ANSI drags this out, the more evidence piles up, and the less chance they will have tossed out. Plus, if law enforcement ever does come calling, ANSI will have destroyed any chance at answering the famous question “what did you know, and when did you know it?” I think saying “well, nobody paid us to investigate” is going to be a shaky response.

Want to help me make my case before Congress, the very place ANSI CEO Bhatia testified, under oath, that his organization was running smoothly? Click here to help.