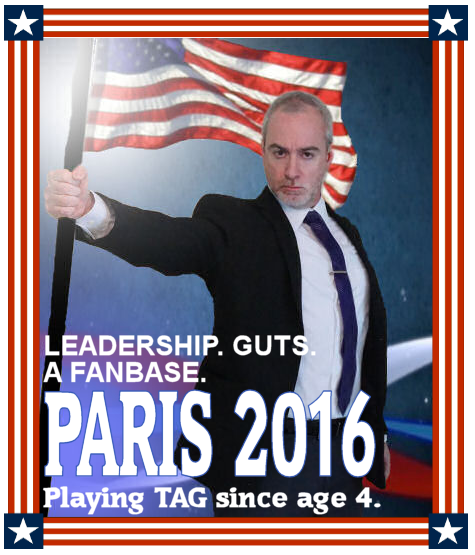 Yes, I am announcing my intention to run as a write-in candidate for the Chair of US TAG to TC 176. And I plan to run on a campaign promise that anyone who votes for me a free unicorn pony. If you don’t like unicorn ponies, you’re a terrorist who hates America.

Before anyone dismisses me as a lunatic, there are two things that need to be made clear. First, I don’t mind being a lunatic, I just don’t like being dismissed.

Second, the campaign is about bringing to the forefront some very troubling problems within the US TAG and ANSI, so TAG members can have an open conversation about them, and possibly affect real and lasting change to both the TAG and to ISO itself.

The current US TAG procedures, ratified by ANSI, are a shocking parody of user engagement and democracy. Sure, every nutjob blogger decries his critics as hating democracy, but if you read the rules (and go right ahead) you will find I am not kidding.

(You can download the TAG rules here. The document says “draft” but ANSI assures me these are the final, ANSI-approved rules. Apparently the TAG hasn’t ever updated the file, and has restricted their circulation so much, that neither the members nor ANSI itself have ever seen a copy of the final rules.)

The TAG Chair, Vice Chairs, and Subcommittee Chairs are elected by the members of TAG 176 for concurrent three-year terms, with a limit of three terms. All terms begin January 1. Six months before the expiration of these terms, the TAG Chair will appoint a nominating committee of not less than three TAG members to nominate candidates for these positions.

Election of a candidate requires approval by at least a majority of the membership through a formal recorded vote.

Did you catch that? The rules allow the TAG Chair — currently Alka Jarvis — to gather three hand-picked members, and go into room and close the door. During that meeting, from which TAG members are barred, Jarvis and the “Nominating Committee” will select a person as the next Chair. The rules say “candidates” but they mean one candidate for each position.

Jarvis will then emerge and the members will be given a few weeks to vote on that single candidate. No competing nominations are allowed, and no competing candidates can run. You either vote on Jarvis’ hand-picked successor, or you don’t vote.

The rules don’t provide for this, but in 2005 the TAG leadership did say that write-in votes were allowed. But without a mechanism for mounting a competing campaign, and a very short period of voting, the rules make this all but impossible. And it’s likely that if any serious write-in campaign were mounted — say, mine — they would just change course and say the rules didn’t provide for it.

If this sounds like institutionalized cronyism, that’s because it is. The system ensures that the TAG leadership never changes, and that the previous Chairs always retain control by placing willing dupes in the seat.

I Am Going to Break The Wheel

This year, I propose a change. And it’s important to do so.

On the runup to ISO 9001:2015, the US failed to get support for its opposition to ISO 9001:2015, getting only seven other countries to agree to a “No” vote, while the UK/BSI-led push for “risk based thinking” managed to win overwhelming support. Some have argued this is because BSI is pressing to create a captive audience for its new risk management training courses.

Meanwhile, the world’s industries are telegraphing near universal disdain for the proposed standard, with entire industries (automotive, aerospace, oil, pharma, medical devices) threatening to abandon alignment to ISO entirely if the standard goes through.

A strong US TAG Chair can work to fix this, by first calling on ANSI to reject the 2015 draft and NOT ratify it as a US standard, and then pushing ISO to investigate the role of the TMB, which mandated Annex SL against international rules and the consensus process. Through ANSI, the US TAG can launch a formal complaint against the TMB with the WTO, and put a pause on 9001, so we can get it right. While doing all of this, the TAG leadership can be working with their colleagues in the other nations to do the same, and to gather support.

The hand-picked successor of the Alka Jarvis will not do this. Instead , they will stay the course, and simply continue to collect personal rewards for the position, in the form of keynote speeches, book deals and webinars.

The Peasants are Revolting

I am asking US stakeholders to attend the next US TAG meeting — scheduled for August 12-13 in Washington DC — and call for a motion to review the current election rules. TAG members need to write to the current leadership and demand a re-examination of the TAG election rules, specifically calling for a vote on the motion at thenext TAG meeting in August. At that meeting, a TAG member must formally make the motion, and another must second it. Then the membership must vote on changing the election rules toinclude something that looks vaguely democratic, perhaps this:

The TAG Chair, Vice Chairs, and Subcommittee Chairs are elected by the members of TAG 176 for concurrent three-year terms, with a limit of three terms. All terms begin January 1.

Six months before the expiration of these terms, the TAG Chair will publish a call for nominees for the positions. A nominee may be considered a valid candidate if he/she receives a nomination from at least two TAG members; a member may not nominate him/herself. The nomination period shall last one month.

Five months before the expiration of the terms, the TAG chair will publish the list of nominees, and invite each nominee to present a paper defining their vision and plan for management of the TAG. These papers will be distributed to the members to inform their voting.

Four months before the expiration of the terms, the TAG will hold elections. Election of a candidate requires a majority of the membership thorugh a formal recorded vote. If no candidate wins a majority, a run-off election will be held.

The current TAG leadership is barred from using its authority to, in any way, influence the nomination process or the outcome of the election.

The current TAG leadership will throw up a series of roadblocks and cherry-picked quotes from current rules, but it’s moot. The point is to call for a revisiting of the rules, and that is not in any way prohibited by the rules themselves. No matter what the TAG leadership says, the effort must push forward. If they refuse, the issue must be escalated to ANSI.

Failing that, I invite stakeholders to mount a write-in campaign to challenge the hand-picked nominee. And, no, it doesn’t need to be the guy who promises to give you all free unicorn ponies.

The validity and trust of ISO 9001 is on the line, and the US TAG should lead efforts to reform, not follow for purposes of personal gain.

The ability of the various TAG leaders to give paid speeches and write books should not take precedence over the incredible financial hardships the new ISO 9001 standard will impose on American companies. Their personal ability to cash in should not trump the TAG’s mission to represent all US stakeholders, including the employees who are likely to get laid off if this pushes ahead. Alka Jarvis and her successor are not more important than the notion of a democratic election process.

Write to the TAG administrator and Alka Jarvis to let them know you intend to call for a review of the current election rules at the August 12-13 meeting in Washington DC, and you demand this action be placed on the agenda.