URS Head of Regulatory Affairs Has Meltdown, Must Be Fired [Adult Language] 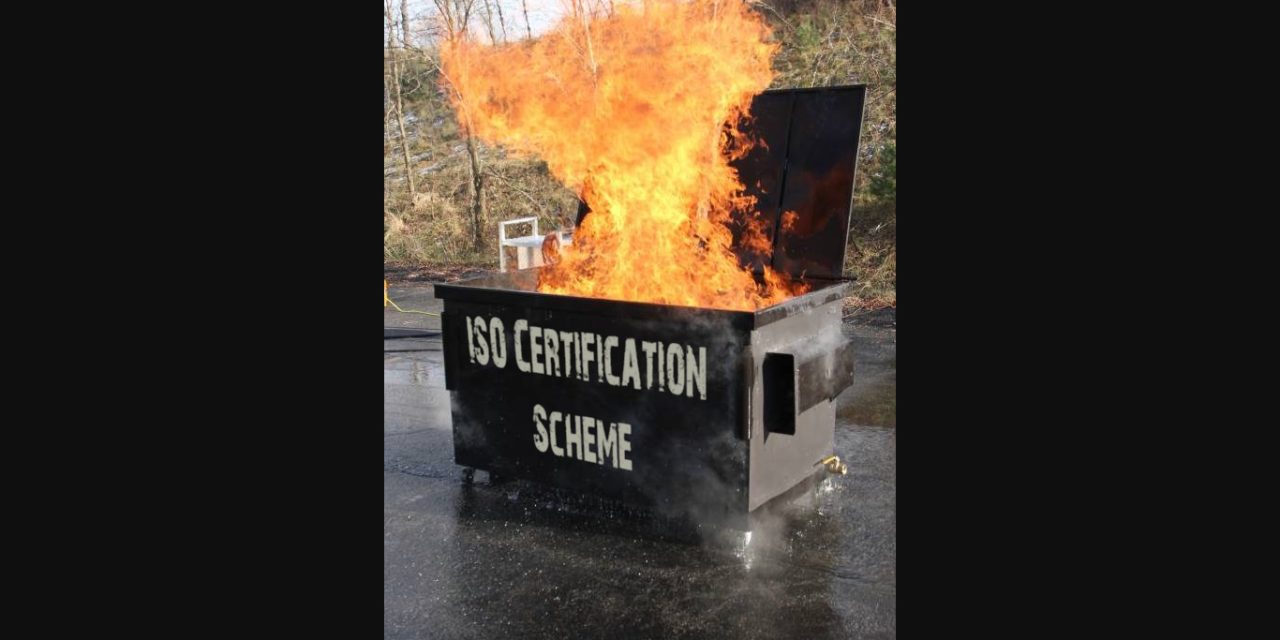 I’m quickly getting exhausted with the parties involved in the complaint related to GNH India’s sales of fake COVID cures while holding an ISO 9001 cert issued by URS. To date, nearly every single person involved has proven the old adage that the ISO scheme is like a proctologist’s office: filled with assholes. And I’m calling them out on it.

First was Graeme Drake of APAC, who wanted nothing to do with the issue at all, despite the risk of people actually dying. Presumably, Drake was busy that day cleaning his pool or plotting ostrich genocide.

Next, “Ravi Kumar” of GNH India has threatened legal action multiple times, all for telling him that the FDA wants the Biocence products pulled from the market. Mind you, FDA said that, not me, but Kumar wants to sue me for some reason. In his increasingly unhinged emails — clearly not vetted by any actual corporate attorney — Kumar descends into a smug, sneering attack against my “English” comprehension, insisting he’s interpreting the FDA Warning Letter better than I am. He’s not.

To make his case, however, Kumar has to string together a series of lies that show he has no idea what the fuck he’s talking about. 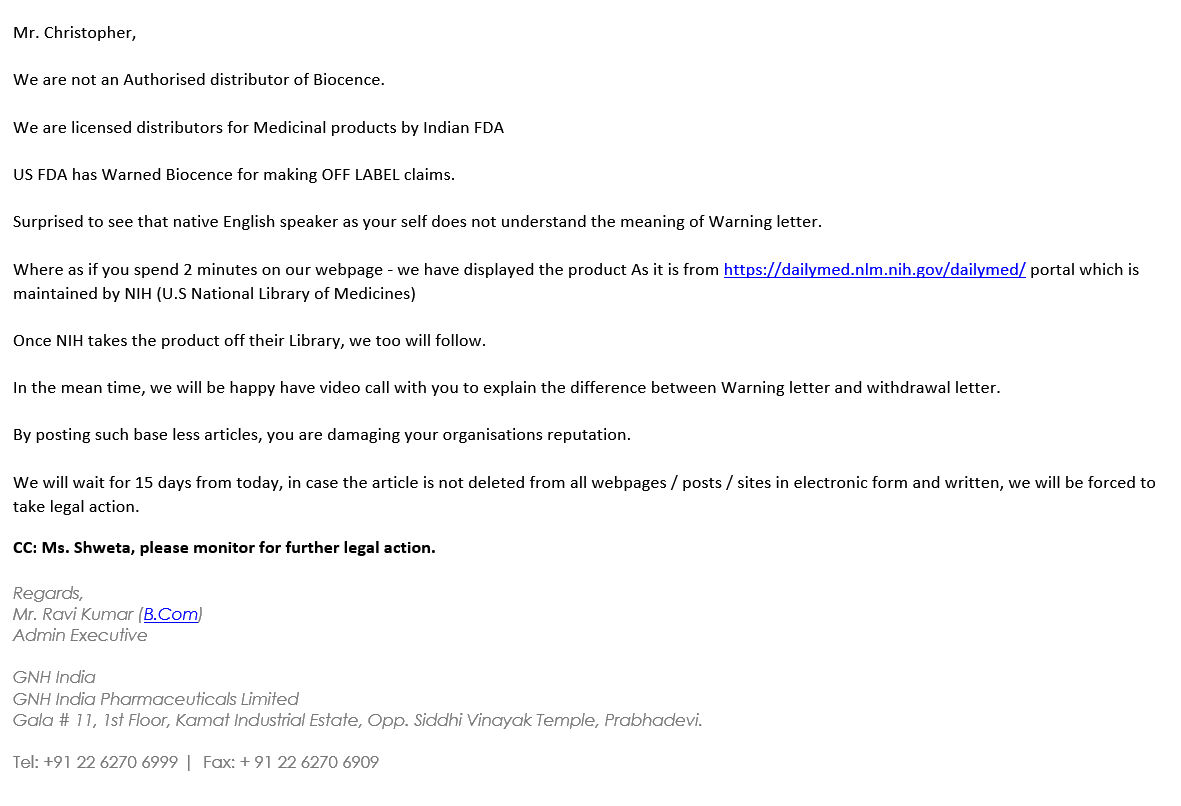 I then provided a screenshot from the GNH India website which says it is a distributor of Biocence:

To which Kumar sent another asshole email: 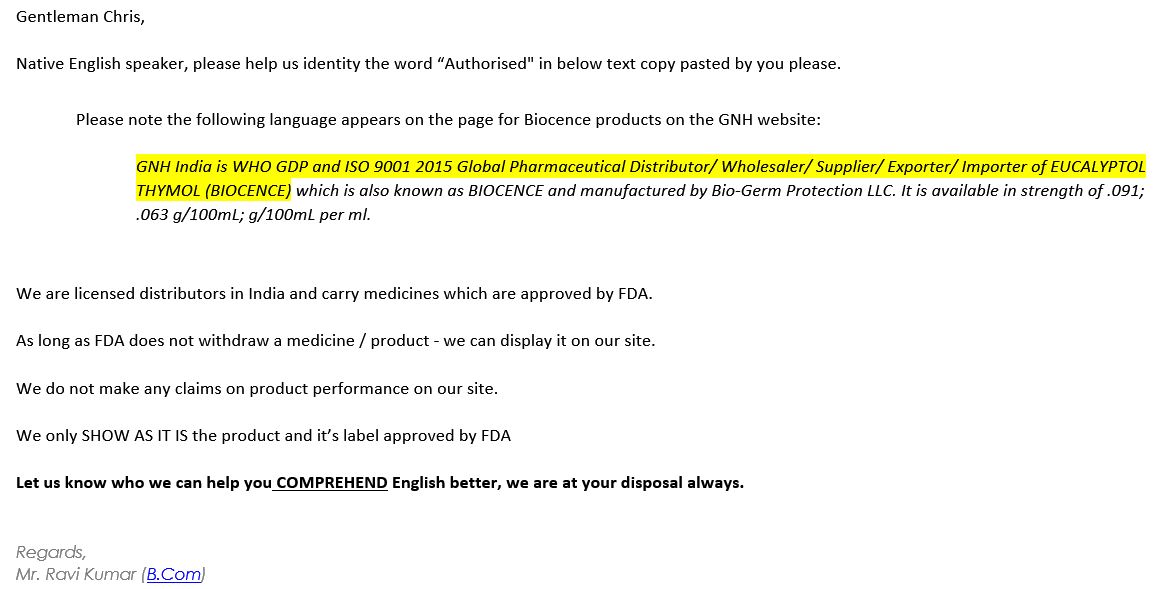 To which I responded by providing yet another screenshot from the GNH India website which features the exact same false claims that were quoted, verbatim, in the FDA Warning Letter (which, by the way, demands the products be removed from the market): 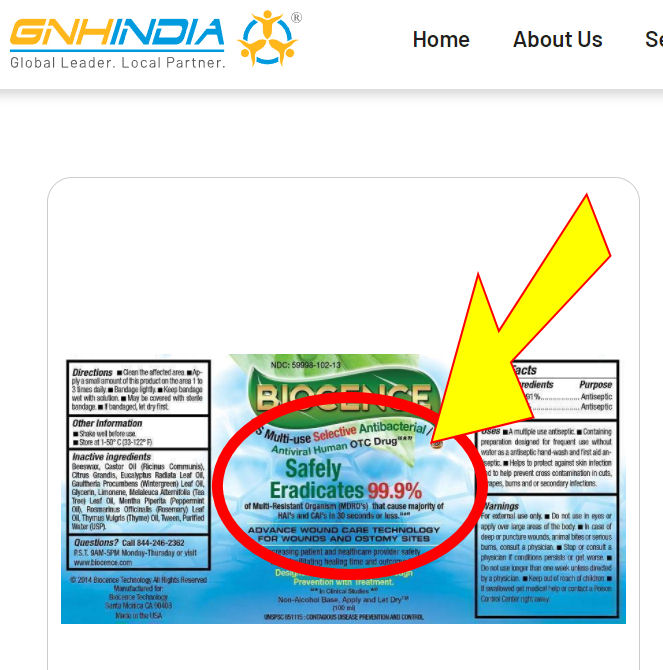 At which point, Kumar shut the fuck up. (See update below.)

But we still have yet another asshole to meet. Let me introduce you to Vikas Sengar, the head of Regulatory Affairs at URS India. After I found that URS had a “Ravi Kumar” working for them in India, I requested that URS check to make sure it’s not the same person. I specifically said, “this is likely a coincidence, but should be checked.” Here’s a screenshot, since URS isn’t paying attention:

So first, Sengar claims he has no one at all working at URS named “Ravi Kumar”:

The problem is that it was a lie. So I sent Sengar this screenshot, of a URS India auditor named “Ravi Kumar,” telling him — again — that “I’m just trying to verify that it’s not the same person.” 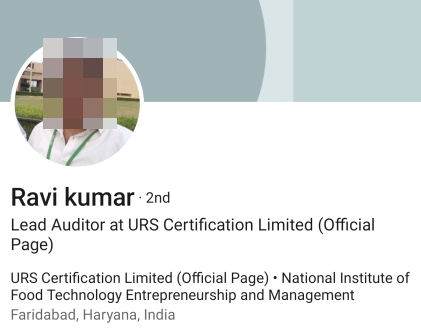 And in response to that, Sengar had a complete, full-on meltdown, similar to that of GNH India’s Kumar. He sent me nineteen screenshots of over 100 people named “Ravi Kumar” on LinkedIn, saying that I had claimed the URS auditor was the same person as the GNH India representative — despite me telling him twice that I simply wanted them to check.

Seriously, here are all the attachments he sent: 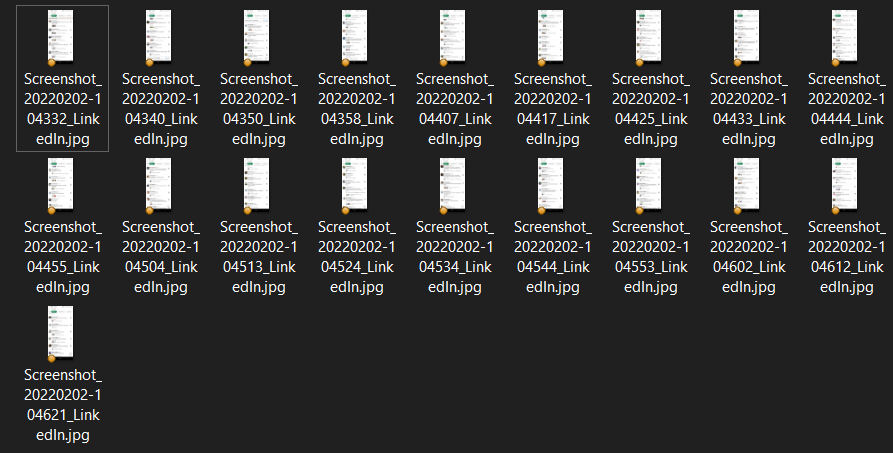 You have to read this pompous jackass’ email in its entirety: 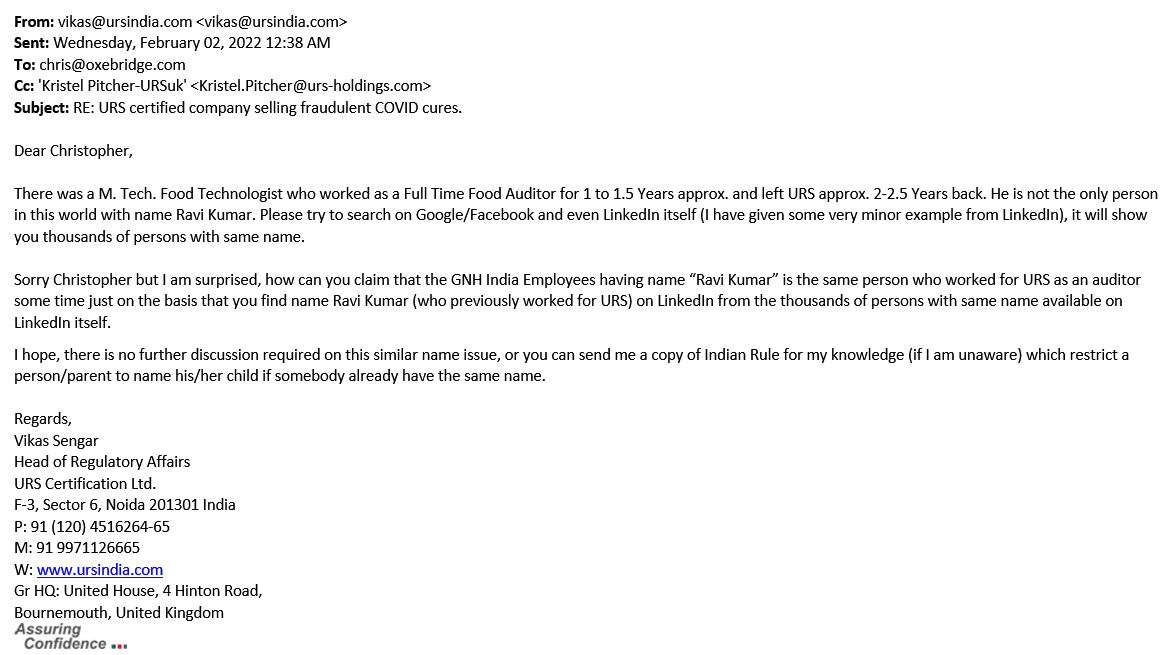 Now, remember two things: first, this issue arose because a URS certified company is selling eucalyptus-based products which are falsely being marketed as treatments for COVID. That means that people could literally die from these products, which are sold by a company holding an ISO 9001 certificate bearing the URS and UKAS logos.

Next, this rant came from URS’ Head of Regulatory Affairs. That’s the guy who should care that the US FDA said the products are “fraudulent” and that the manufacturer is facing criminal prosecution and jail. Instead, he’s wasting time taking screenshots of random people on LinkedIn to make an ass out of himself.

Apparently prompted by his superiors in the UK, Sengar then sent a quasi-apology: 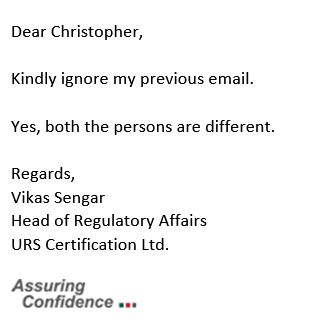 At which point, I wrote this:

Still ignoring his responsibility to make sure that people don’t die using products from his certified clients, Vikas went apeshit yet again, complaining to Kristel Pitcher, at URS HQ in the United Kingdom:

And then this, in which he addresses me as “AH” (for asshole), pivoting away from his quasi-apology, and back to the false statement that I “claimed” the two Ravis were the same person:

And then he sent one more, too, to make sure I got his “AH” joke. Keep in mind, I haven’t replied to him at all here, so he’s just firing off emails like mad, apparently in a rage: 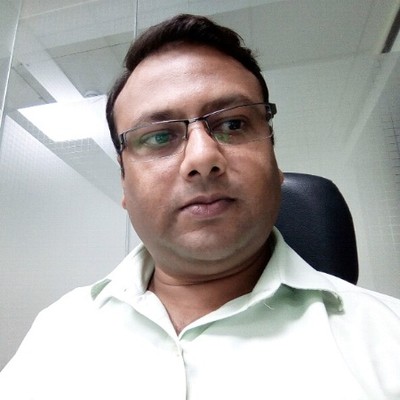 What Sengar accidentally exposed is the “protection racket” nature of the CB/AB/IAF scheme. First, Sengar used his official position at URS to run to the defense of GNH India, without any regard to the facts or risk to public health, and in violation of his obligation to be impartial and objective. Then, when challenged, he fled to the bosom of the Accreditation Body community, seeking their protection from a foul-mouthed whistleblower: “I think we should inform to US Authorities, ABs and all related bodies regarding his shameful Language.”

Yet again, another CB idiot thinks I’m held accountable to AB rules, even though those rules apply to them. I’m just the guy constantly reminding them of this fact.

Clearly, there is no way that Vikas Sengar should be working anywhere near anything related to conformity assessment, if this is his mental state. Not only does it show that URS as a company is allergic to the concept of being “responsive to complaints” as required by ISO 17021-1, but it also shows he’s an insecure, petulant lunatic. Sengar — the URS Head of Regulatory Affairs — doesn’t care that people are going to die by using products made by a company using his logo, but he does jump to action if he feels someone dared ask him a valid question.

At this point, I’m starting to think the URS auditor named “Ravi Kumar” is the same person, because the parties are going very far out of their way not to answer a simple question.

URS is proving to be a dumpster fire in the accredited CB world. First, they issued an ISO 9001 certificate to another CB — in Russia, mind you, violating EU sanctions — and had to withdraw that. They responded to a formal complaint related to improper quoting by assigning the blame on the clients submitting their applications, not the office issuing the quotes. Now this fiasco, with GNH India and fraudulent Biocence products.

I’ve called on URS UK to fire Sengar, since his priorities do not lie with regulatory compliance — nor even maintaining the appearance of ISO 17021 compliance — and are solely fixated on upholding his tinpot dictator status at URS India. If URS refuses, we will know what kind of company they are, and that they don’t care if they help promote products that could kill people.

The problem now is that the email chain is so polluted with people shouting and making excuses, bodies like UKAS and APAC can toss it out, branding it as a “tit-for-tat.” Again, the fact that people could be killed in this case won’t matter.

Am I wrong for being angry about this? Or should we just let ISO-certified companies kill people?

UPDATE 3 February 2022: Kristel Pitcher of URS UK has written and taken a posture to accept, at face value, the email explanation by GNH India, despite it being filled with lies. She has also not mentioned Vikas Sengar at all in her reply, and clearly hasn’t committed to even addressing his behavior with him, much less push for his removal from URS.

UKAS has been copied on all of this, and so far remains silent… as usual. The risk to human health has no interest for them, perhaps because these are Indians and not British citizens.

As usual, what should have been a simple matter resolved with a simple solution — URS performs a special audit on GNH India to ensure they have corrective actions in place and comply with regulations — now turns into a massive, melodramatic shit-show.

UPDATE 8 February 2022: URS continues to dodge the issue, refusing to address the risk to human health and public safety, and instead saying they will only investigate the matter “solely in the context of the ISO Certification held.” Because — again — if Indians die, some white people in the UK don’t give a shit.

Meanwhile, Ravi Kumar didn’t shut up. Now he’s spamming the Oxebridge email accounts by sending the same emails repeatedly threatening legal action, while ignoring the facts on his own website.