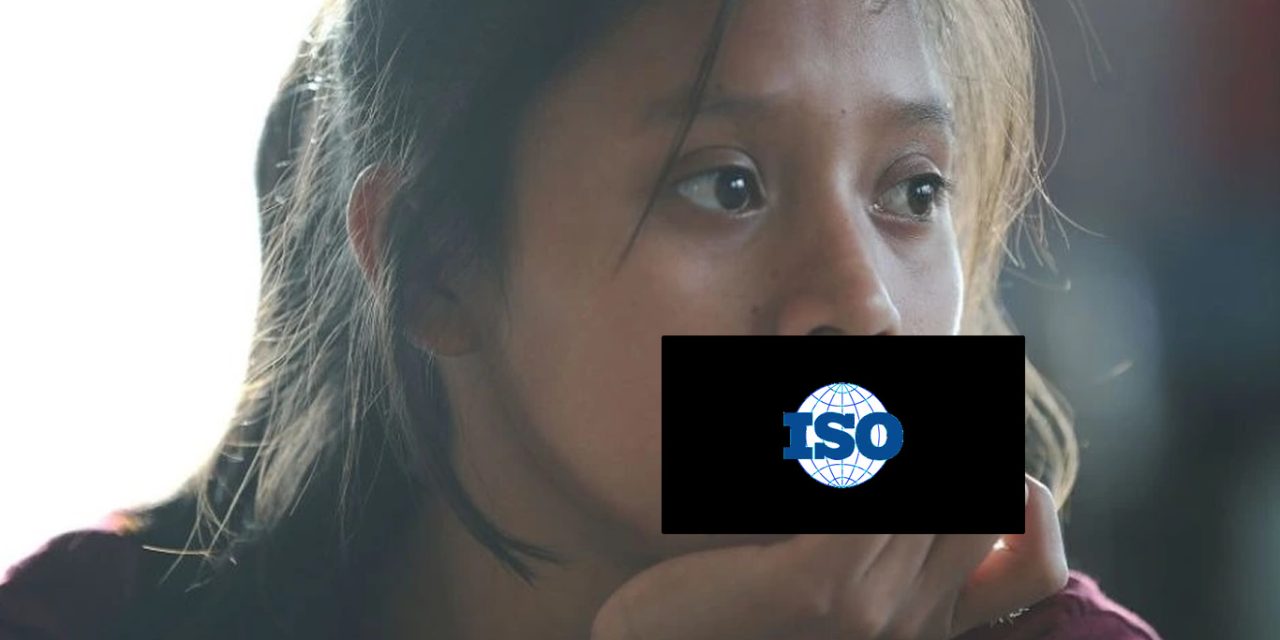 Third-world nations are “third world” for a variety of reasons. Institutionalized graft, poor education, crippling and ineffective bureaucracies, and a tendency to lean towards authoritarian leaders (of either side of the political spectrum) … just to name a few. But it’s safe to say that most languish in third world status because of first world exploitation.

These countries don’t lack valuable resources. The nations of nearly the entire African continent are awash in valuable minerals. South America holds vast quantities of equally valuable resources, as well as a massive jungle filled with plants that are priceless for pharmaceutical research. Instead, corrupt governments, propped up by first-world powers, consistently ensure the nations themselves cannot benefit from these resources. In 2018, Peru discovered massive lithium deposits, at a time when lithium is desperately needed for the world’s growing battery needs. Instead of ensuring Peru benefited from these discoveries, then-President Pedro Pablo Kuczynski (“PPK”) handed the finds to foreign, first-world mining companies, in exchange for bribes. It’s not an accident that PPK was a former official with both the World Bank and the International Monetary Fund, two stalwart first-world organizations that bully third-world nations into surrendering their sovereignty in order to prop up the USA and Europe.

Stories like that abound. Where valuable resources are found, these are quickly handed over to first-world powers while despots and corrupt politicians remain in power, abusing their own people. This is not new.

So it’s troubling to see, within the ISO standards development community, so many third world nations embracing their own exploitation, and succumbing to ISO’s own form of neocolonialism. Rather than fighting for an equal position at the table, developing countries appear happy to accept token table scraps, and surrender their independent thinking.

Just Tell Me What to Do, Boss

To see evidence of this, we need only look at official voting records from the nations themselves. In 2015, ISO circulated a ballot that was, essentially, “spiked” to generate a predetermined outcome. It asked member nations to approve a pre-selected slate of representatives, all of whom were from first-world nations, and all of them known to ISO as pliable, friendly toadies. Angola’s IANORQ happily ceded its sovereign rights by endorsing the placement of the US’ Lorri Hunt as head of the committee for ISO 10007, the standard for configuration management. (There is no evidence that Hunt has any experience at all in this subject, never mind that she is a subject matter expert on CM.) Angola then went on to endorse every single other first-world representative that had been handpicked by ISO, including those from Canada and France. It never even entered Angola’s mind to, just maybe, try to assert themselves as leaders of these committees. 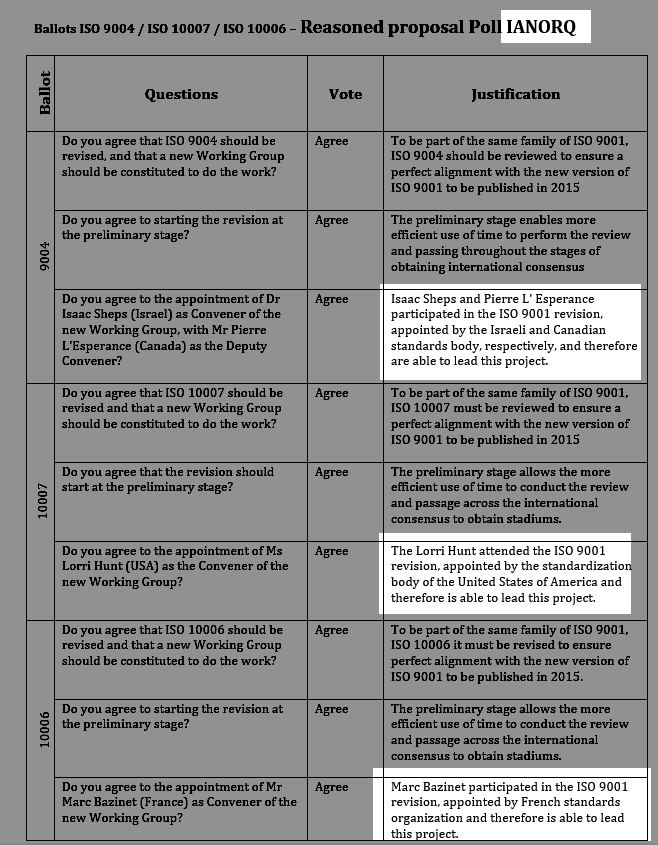 For the more recent ballot on whether to revise ISO 9001 or not, those voting for revision included, of course, first-world nations like the US, UK, Japan, and the Netherlands. These countries all had private consultants running the show, and they stand to make a lot of money pushing for an “early revision” of ISO’s flagship product. Voting in lockstep were third-world nations like Costa Rica, Serbia, Rwanda, and Trinidad. They could have called for more sober, independent minds to hold ISO accountable, but they fell in line instead.

Meanwhile, third-world nations with desirable beachfront properties all vie to win favor with ISO by “hosting” official plenary sessions. As a result, largely Caucasian leaders from the usual first-world countries (again, like US, UK, Netherlands, or Sweden) wind up enjoying so-called “working sessions” in places like Barbados, Bahamas, or Dubai. Then, none of those nations hold leadership positions in any critical technical committees, making them nothing more than the ISO equivalent of a hotel bellboy. Then, the pasty white guys get to write off the vacation on their taxes as a business expense, while the actual writing of standards occurs nearly entirely through email swaps between themselves, with nothing actually being done at the beach meetings themselves.

Let’s not get started on Nigel Croft, who married a Brazilian steel heiress and was then granted rights to represent Brazil at various ISO committees. We are supposed to believe that Brazil could not find a subject matter expert of its own, and had to rely on Croft as its Great White Savior. Croft, ever the ISO toady, has gone on to win increasing duties and influential committee seats, taking his orders from BSI and UKAS in the UK, while continuing to pretend to “represent” Brazil. (Croft claims to speak Portuguese, but I have been unable to find a single video of him doing so, in over 15 years.)

At a 2022 CASCO meeting on developing nations, all but one member represented First World interests. The only third-world participant was from Iran, which raises a whole host of other questions about ISO’s priorities. But the real decision-makers were from the US, UK, Canada, Switzerland, and Germany. 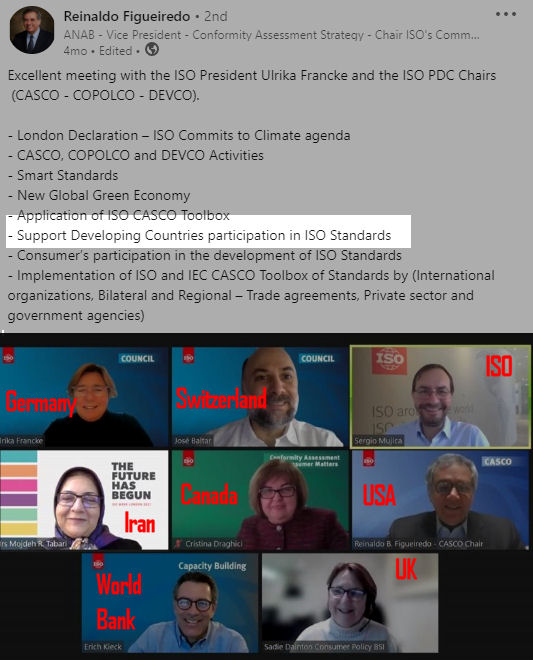 Consider, next, the Asian Pacific Accreditation Cooperative (APAC) which is supposed to manage accreditations throughout Asia. To accomplish this, we are to believe that Graeme Drake of Australia is the region’s only expert in this area, since he leads APAC. Recently, APAC announced that it was going to be represented by Trace McInturff of A2LA at a coming international conference; McInturff lives in Maryland, which is about as far from Asia as you can get. Meanwhile, APAC has no people in authority from the nations it actually serves, like Thailand or Malaysia or India. The Indian accreditation body, NABCB, is happy to prostrate itself before these Australian colonialists because (a) it doesn’t really want to manage accreditations, and (b) it’s happy with the current arrangement, which sees APAC promoting NABCB, even if that means Indians are subjected to corrupt governance overall.

NABCB recently declined to support Oxebridge’s call for the South Asian countries to abandon APAC and form their own regional accreditation group. I can only assume that’s because it might require NABCB to actually do something; right now, they can happily fetch drinks for Drake and his white pals, and not really be held accountable for anything.

Look at ISO itself. Its current Secretary-General is Sergio Mujica from Chile, who is happy to be the face of ISO, even if he’s done nothing at all to ensure Chile has an equal voice as an equal player. While in public office, Mujica ran corrupt government agencies in Chile, and now he’s been rewarded by his first-world masters with a prominent seat in an international organization. Chilenos deserve better.

ISO benefits from this arrangement, as it is able to control the publication of its books (“standards”) on its own schedule, and even force text inside them via the Annex SL work by the Technical Management Board. The last thing ISO wants is independent thinkers and actual subject matter experts. So they stock the group with friendly, first-worlders like Nigel Croft and Lorri Hunt and Dick Hortensius and Alan Daniels, because they can control them. When they play ball, they get more committee and working group assignments; when they don’t, they get ejected outright. Finally, ISO claims to support “developing nations” by populating committees with additional third-world representatives, but only those that will agree to surrender their countries’ rights to Croft and Hunt and Hortensius and Daniels.

During the drafting of ISO 9001:2015, ISO was in a hurry to get the standard to print, so skipped a crucial step: translation of the draft text prior to voting. Instead, ISO held voting and translation concurrently, telling nations they could translate the document “if they wanted to,” but that they were expected to vote on it no matter what. Developing nations should have been outraged, and should have complained to the WTO or UN. They didn’t, and they happily voted on a document that most of their members couldn’t even read.

But why does this happen? As with third world governance overall, the problem remains poverty. The factors I mentioned at the beginning of this article weigh down the economy of their citizens, leaving only the leaders with financial gain. This crushing poverty leads people to develop cultural behaviors that are unique to third world countries: they must do anything they can to try and climb up from that poverty. This, then, reveals itself in two key ways: first, individuals will step over others in their country to succeed, since their family’s survival is at stake; and second, national improvements take a backseat to this individual quest for simple subsistence, ensuring that long-term problems never get solved.

In India, it is well known that the worst exploitation of Indians comes from other Indians. But similar, if not identical, problems exist in Peru and Mexico and Ghana and Thailand. Individuals in such countries who see a way out of poverty for themselves will take that way, no matter if it means harming those around them. India, for example, allows the widespread exploitation of underpaid laborers, and markets that human rights abuse to other nations: the message India sends to Dubai, for example, is to hire Indians, because they will work for slave wages. If a small number of Indian business owners can make a profit and save their own families, then it’s worth it to sacrifice a hundred other families.

(This is not to say that such behaviors don’t occur in first-world countries. But there it’s driven by greed, not by a need for daily subsistence.)

And so third world representatives at ISO never seek to improve their lot.

Wrong People in the Seats

This also results in the wrong people in the wrong seats. Routinely, ISO meetings show that the few developing nation representatives who show up are uninformed on even the basics, and hold no interest in actually doing anything of their own free will. They know next to nothing about writing standards, and are not particularly interested in learning. They are just happy to be given 15 minutes during a CASCO Zoom call, or to host a few white guys at a TC 176 plenary session.

We see this as well on social media, where developing nation standards “experts” display their alleged knowledge by parroting text from standards verbatim, or even copy-pasting it, without any sense of context or deep understanding. I find this particularly prevalent in India and the Middle East, where would-be ISO consultants believe anything that ISO publishes as if it were holy writ, and show little independent thinking. When Nigel Croft invented “risk-based thinking” as a way to market the new standard, even he didn’t really believe the surrounding context of the standard supported it. He just hacked apart clause 0 and the Annex of the ISO 9001 draft, over-writing the work of other people. But now, hosts of third-world reps repeat notions about risk-based thinking as if it actually existed. They can’t be bothered to go back and read the decades of ISO 9001 standards that preceded Croft’s PR stunt, to find out it was dreamed up over a weekend.

This is not to say that third-world nations don’t have smart people and subject matter experts available to them. But the countries have no interest in rocking the boat, and are happy to remain under the boots of the US, UK, and Europe. The symptoms of third-worldism — bureaucracies, graft, and poor education — mean the wrong people rise to the top. And they’re not about to give that up, even if it means dooming their countries to colonial abuse.