An AS9100 certified company in Orange CT will pay over $5.2M to settle a False Claims Act (FCA) lawsuit brought by the US Dept. of Justice. Despite this, the company has retained its AS9100 certification, issued by NSF-ISR and accredited by ANANB, throughout the scandal.

Numet Machining Techniques was acquired by Numet Industries and, more recently, the Bromford Group. Nevertheless, Numet misrepresented itself for years as a “small business,” allowing it illegal access to US government set-asides which are supposed to be awarded to legitimate small businesses. According to the official DOJ press release:

To settle the FCA lawsuit, Numet “paid $5,227,355.28 to resolve allegations that they violated the False Claims Act when Numet improperly obtained set-aside contracts reserved for small businesses that it was ineligible to receive.”

The government found that Numet had made the claims between 2011 through 2016, and as a result, “was awarded 22 small business set-aside contracts that it was ineligible to receive.” Despite this, Numet held AS9100 certification from NSF-ISR since at least 2013, according to official IAQG OASIS results. Despite the public nature of the FCA lawsuit and settlement payments, it has since retained that certification without any interruption.

According to OASIS, NSF-ISR performed eight separate audits during that time, and never once suspended or withdrew the AS9100 certification.

AS9100 clause 8.2.2, which NSF-ISR attests to have audited on multiple occasions, requires that the certified company will “ensure that the requirements for the products and services are defined, including … any applicable statutory and regulatory requirements.” 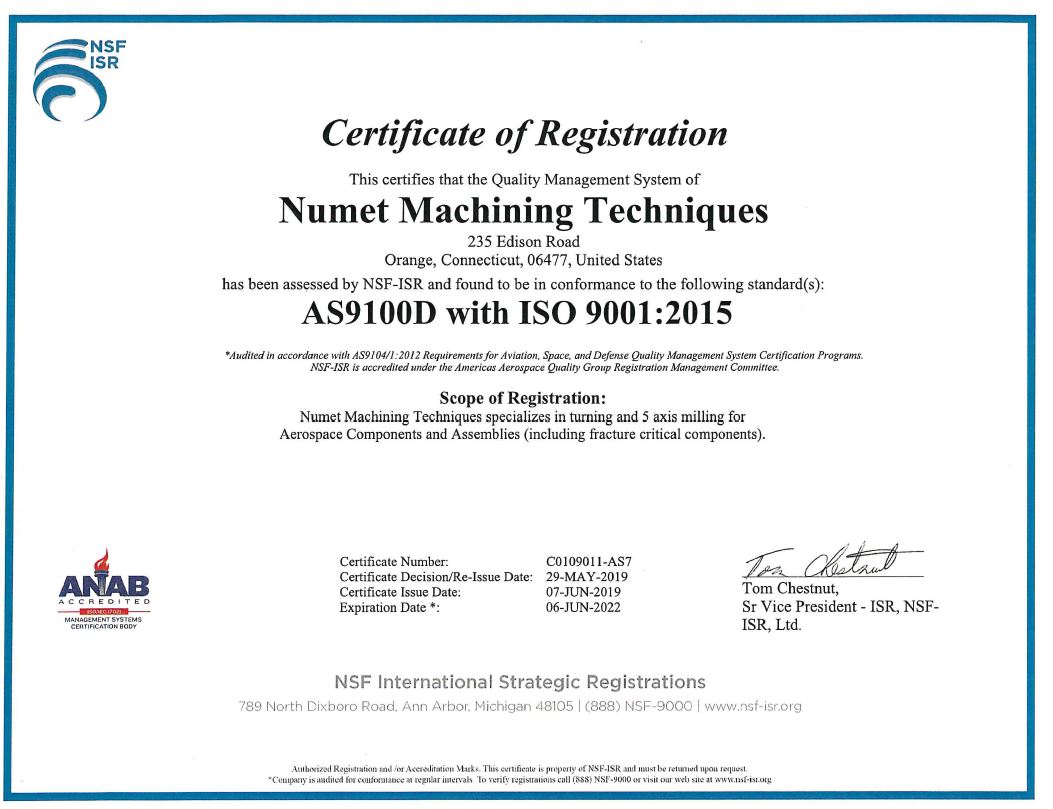 The AS9100 clause adds numerous requirements related to statutory and regulatory compliance, on top of the core ISO 9001 standard upon which it is based.

During the nine years covered by the NSF certifications, it would also be likely that NSF’s accreditation body, ANAB, should have covered the issue on at least one of its annual “witness audits” of NSF. ANAB also appears to have missed or ignored the DOJ’s public lawsuit against Numet.

The current As9100 certificate issued to Numet is signed by NSF’s former COO and Sr. VP Tom Chestnut. Chestnut’s LinkedIn page says he retired in 2021.

NSF has a long history of ignoring regulatory investigations against its clients, allowing such companies to remain certified so long as they pay their annual fees. Previously, NSF took no action against a company that had forged aerospace source inspection records, and which was under a criminal trial. Likewise, NSF ignored over 280 ITAR violations by a company that paid over $20M in civil penalties. NSF also issued an ISO 9001 certificate to a company involved in a class-action lawsuit in which alleged defective products had been intentionally sold to law enforcement officers; that company eventually paid out victims in the case.

The AS9100 oversight body, IAQG, refuses to enforce accreditation rules, allowing companies who violate laws or willfully fail to comply with AS9100 to nevertheless retain their certifications, provided they continue to pay for certification audits by bodies such as NSF.