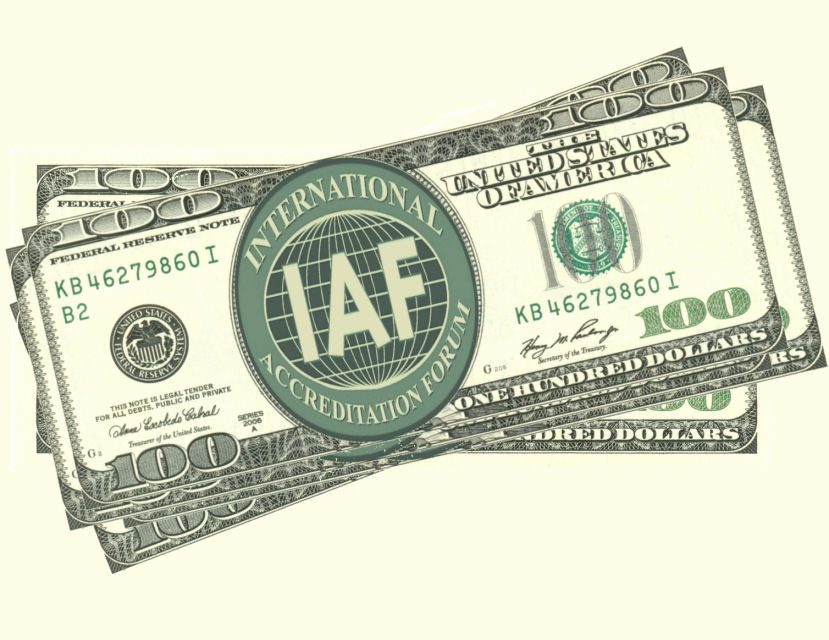 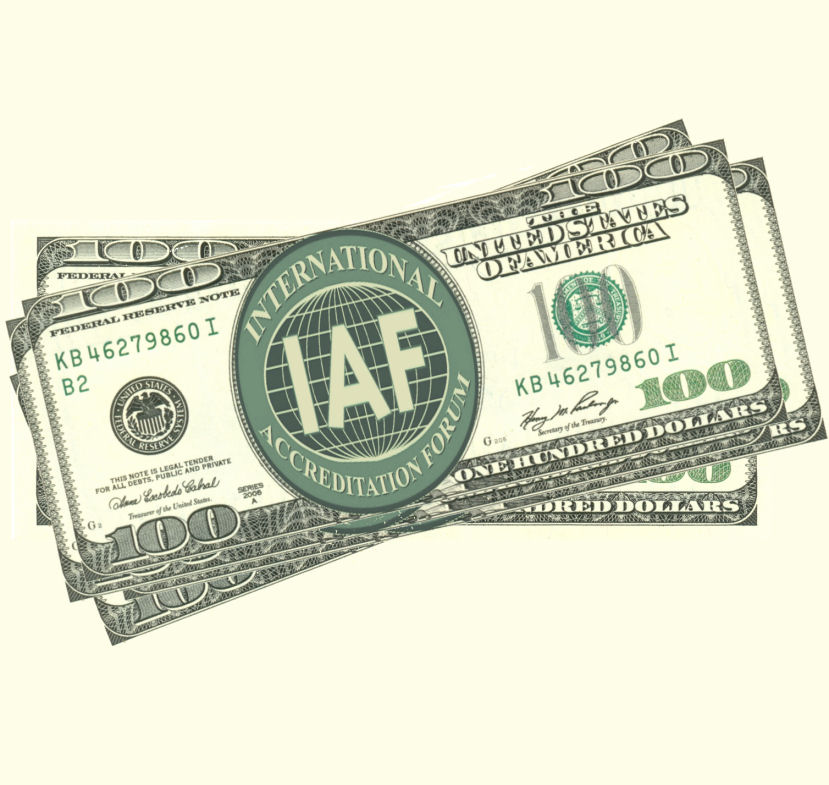 In the United States, “not-for-profit” organizations typically have to file their tax returns publicly. As a result, they are often easily retrieved, and have juicy nuggets of interesting information. The International Accreditation Forum (IAF) is a registered 501(c)(3) not-for-profit organization, and so we get to see their tax information every year as well. The last available public return is from 2015, which would have been filed in 2016, and provides nuggets aplenty.

If you don’t remember, the IAF oversees all international accreditation activities for ISO and related standard certification programs. You — as a user of ISO 9001 — hire a registrar, or “certification body” (CB) to audit you and issue your certificate. That registrar is accredited by an Accreditation Body (AB), of which there is typically only one per ISO member country. In the US, it’s ANAB; in the UK it’s UKAS, and SCC in Canada, etc. The Accreditation Bodies then belong to the IAF, where they sign multilateral agreements and other joint policies, to ensure that an ISO certificate issued in one country, under one CB/AB logo set, is recognized by the others. The IAF conducts “peer review” audits of the various ABs to — allegedly — ensure they are complying with the necessary accreditation rules, such as ISO 17011.

The belief is that having an “IAF-matrixed” registrar — meaning one that is accredited by an IAF member AB — provides higher confidence and trust in the resulting certificate, thus differentiating it from one you’d buy off the internet for $500, by a wholly unaccredited charlatan. The criticism of the IAF is that they have merely institutionalized charlatanism.

Before we go anywhere, understand that I am a not an accountant nor a tax professional. I pay people to do that stuff for me. So everything I am writing here comes from a regular guy trying to parse a tax return; it’s a simple document, but there are undoubtedly explanations and nuances that an actual tax accountant would understand that I don’t. (If you are such an accountant, and would like to help me analyze this further, contact me.)

Some random observations from the data, in no particular order:

1.) Revenue. In 2015, IAF brought in an annual revenue of $549,000. Of that, about $435,000 was from member dues, paid by the world’s Accreditation Bodies, such as ANAB and UKAS. The balance of revenue came from “meeting fees” — whatever that means. Apparently members not only have to pay to join IAF, they then have to pay to attend meetings as well. This model is consistent with ISO itself, so it makes sense that IAF would adopt it. What a racket.

This revenue is a stunning drop from the prior year, when IAF claimed a whopping $913K in revenue. Compared to earlier years, 2014 appears to be a “spike” but may also be the result of a change in how they reported revenue. I’m not certain, but it’s noticeable. I have no explanation for the spike.

3.) IAF totally uses the ANAB address, right down to the suite number. The address for IAF is exactly the same as that of ANAB, which is strange for a host of reasons, and points to the lack of independence the IAF has. ISO historians know the IAF was formed by ANAB, who convinced a few of their friends to join, back when the ANAB was still known as the Registrar Accreditation Board, or RAB. But the marketing of IAF insists it’s some sort of “team of rivals,” competitors joined together for the common good of “harmonizing accreditation activities.” They then influence the development of accreditation standards through their work on ISO/CASCO, but for years the VP of ANAB — Randy Dougherty — was also one of the senior execs at IAF, sort of revealing the entire thing was a shell game. Dougherty is since “retired” from ANAB (not really, but whatever), and he’s still running IAF.

The IAF was always ANAB’s baby, and just shows that it still is. It also shows that no other world Accreditation Body ever thought enough of the IAF to warrant a desire to take it over. They leave that largely symbolic job to ANAB.

But it reeks of conflict of interest, and nearly eradicates any trust you can have when your registrar claims accreditation by ANAB, and the cert includes the IAF logo. They’re the same people!

4.) Sheronda Ascendant. The name Sheronda Jeffries appears on the IAF staff, which to me is a huge personal disappointment. I endorsed Jeffries as Chair for the US TAG 176 elections a while back, thinking she came from the ISO 9001 standards user base, and because she came personally endorsed by someone I trusted, from her work on TL 9000. I’ve since heard the TL9000 committee is an absolute train wreck, much like the TAG, and then watched as Jeffries did the usual ladder-climbing-for-personal-benefit thing that folks like Jack West, Denise Robitaille, Randy Dougherty and the abhorrent Paul Palmes did. Suddenly, her name was on every committee, everywhere. While she ostensibly works at Cisco, it’s a foregone conclusion she will quit and form a “consulting company” and then write a lot of books on ISO standards, trying to eclipse whatever she was being paid at Cisco. After that fails, expect her to take an executive role in ANAB, probably as their new VP. That pays more than Cisco.

Jeffries’ name appeared on the IAF’s new “User Advisory Committee.” I misread that name to mean it was advising the IAF on user feedback, but no… it’s clearly intended to be the IAF’s tool for advising users, and not the other way around. Anyway, I wrote to Jeffries and offered some backchannel feedback from users, thinking this might be valuable for her to carry on to the gods, as she saw fit. I told her I would provide the information, and she could use it or not. Then I didn’t hear back for weeks. Then she did the one thing that couldn’t have sent a louder message that she’s just another crony: she wrote back with a generic “thank you,” offering no opinion whatsoever on my offer, and cc’d her boss at the IAF. It was a “CYA” move. Jeffries didn’t want backchannel access to actual users, she wanted to protect her job. Likely afraid that someone would mistake her as being in communication with that Oxebridge asshole, she wanted to disclose the information, while at the same time shutting it down. Oh, well.

5.) IAF lists a Chinese national on its tax return. I guess it’s not illegal, but it is another weird bit of melodrama. As reported earlier, the IAF’s new President is Xiao Jianhua, who also happens to be a senior executive for the Chinese National Accreditation Service (CNAS), which is China’s accreditation body (and ANAB’s competitor). Since none of the officers report any salary from the organization — which is also weird — it’s not like IAF is paying a Chinese national. But what does raise eyebrows is that ANAB is an actual US Department of Defense contractor, which probably has all sorts of ITAR sensitive data floating around, and Xiao would not be allowed to see any of that. I hope they keep him in a fishbowl when he visits Plankinton Avenue.

6.) Salaries are Zero. The officers receive no compensation, per the return, meaning the IAF isn’t paying anyone on their staff. At least not directly, wink-wink. See # 7 below.

7.) IAF is Elva Nilsen’s Personal Piggybank. The trick used by not-for-profit (NFP) organizations is to claim no salary on their tax return, but then pay exorbitant amounts third-party consulting firm, which then pays off the officers in some way. That way, the officers can claim no compensation on the NFP’s tax return, which faces the public, while actually cashing a check behind the scenes. We can’t know for sure if that is what IAF is doing, but it’s only major expense was an annual payment of $278,000 to Elva Nilsen’s consulting company, EJN Consulting. That payment represented a whopping 48% of IAF’s total annual expenses in 2015. Nilsen is the Secretary of IAF at the same time. So while the officers show no compensation by IAF, IAF can make a payment to Nilsen’s private company, whose tax returns are not available for public scrutiny, and Nilsen can then write checks to those officers without anyone knowing.

I will say this, however. If Nilson is doing this, they still aren’t paying the folks much. Dividing up $278K between eight officers only yields them about $38K each, which isn’t much in the grand scheme of things. The alternative, however, is worse: that the IAF uses its revenue to pay off Elva Nilsen, and she keeps the entire thing. Which means the world’s accreditation scheme is actually just a means of paying Nilsen off. This latter possibility is also the most likely. Per an earlier 2012 tax return, the IAF typed in a justification for a payment made of $253,000 in that  year, saying, “EJN Consulting provides secretariat services as an independent contractor to the IAF.”

(BTW, the American Society for Quality does the same sort of thing, paying huge portions of its annual revenue to consulting firm AQS. I’ll have separate reporting on their tax information shortly.)

If you’ve never heard of Nilsen, you’re not alone. She has virtually no social media profile, tweeted exactly once, and it’s not even clear what country “EJN Consulting” operates in. The tax return does not indicate a corporate entity indicator (“Inc” or “GmbH”) which might hint at its location. Her LinkedIn profile only indicates she is in Ottawa, but that doesn’t mean EJN is registered there. It’s highly likely it’s just a company formed for the purposes of accepting IAF (and other?) checks, and the address is just her Canadian home address, but since it’s a private company there’s no public record.

There are precious few photos of Nilsen, either, but one is telling: in a 2007 article boasting of IAF having attended “China Day,” Nilsen is seen standing next to Xiao, who at that time was listed as the CNAS Chief Executive; as I said, he would later become the IAF President. Nilsen, however, was listed as Vice Chairman of the IAF back then. So she’s been a silent string-holder for a very, very long time.

8.) IAF Has No Lawyer. Per the filing, the IAF only has a few thousand bucks spent on legal fees in any given year, meaning they don’t have an in-house counsel and don’t have an attorney on retainer. This not only makes them a rich target for bogus lawsuits by the unaccredited certificate mills and other ne’er-do-wells, but also suggests they don’t run their policies through any legal review before releasing them. It also means they are wholly unprepared for any legitimate actions that might come their well, too, say a class action suit for creating an expensive, crippling industry burden by making up that “3-year transition deadline” out of thin air. For an organization like IAF, you would expect to see a massive chunk of their expenses go towards legal fees, and instead they give it all to Nilsen. That’s some very interesting intel.

Stay tuned for a similar report on ASQ’s tax returns.