[Adult language ahead. Racists may get triggered.] 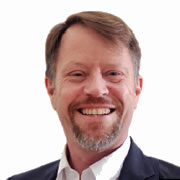 Poor TC 176 SC 2 Chair Paul Simpson. Hardly a day goes by when he’s not putting his foot in his mouth, and then leaving it there.

Simpson got his role at TC 176, however, because of a dogged determination to shove his head up the ass of anyone in leadership, including at ISO, ASQ and CQI. It’s worked, too, except for the side effect of him having torched whatever respectability anyone should have for him.

His LinkedIn posts are a string of “likes” and name-drop callouts to the various Gods he worships, including UKAS, CQI, and the others. In a post I made, wholly unrelated to him, I celebrated the fact that I’m not beholden to any such organization, and can publish what I want. It’s that freedom that allowed me (and Oxebridge) to push these groups to make key changes, for example. We were able to publish articles that eventually forced CQI to switch to all-virtual events; they had been pushing in-person events long after the COVID-19 pandemic had already started killing people. It was our reporting on ASQ’s refusal to denounce racism that finally pushed them to make a public statement. It’s our independent ISO Whistleblower Program that has seen the de-accreditation of a handful of bad actors in the industry, and the filing of dozens of important, official complaints against others.  These things would have never happened if I followed Simpson’s model, to let my direction be dictated by some publishing companies.

Simpson chimed in on my post, however, claiming he was his own man, in a sycophantic post in which he literally typed links to the accounts of his Gods, so they could see his praise of them pop up on their feed updates. 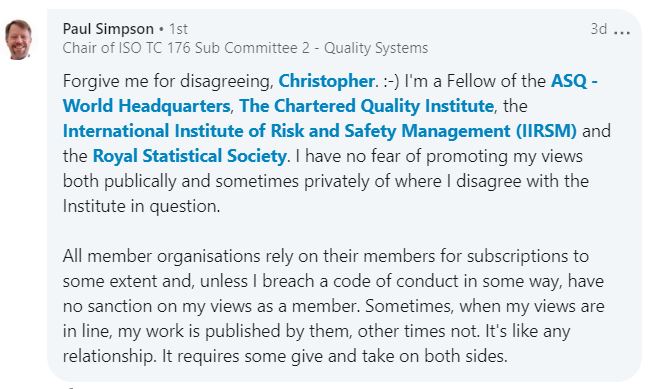 Notice how he essentially admits that if he disagreed with any of them, they wouldn’t publish his stuff. He wrote that “when my views are in line, my work is published by them, other times not.” That’s literal self-censorship to please a publishing company. Simpson says the silent part out loud. He has no personal truth, because he’s a vapid shell of self-absorbed cynicism.

Called out, I challenged him to put his money where his mouth is. I pointed out my success with ASQ, and called on him to demand that CQI denounce racism. The UK is under tremendous turmoil and protests against racism which may be less incendiary than those in the US, but are drawing a lot of attention anyway. The CQI, under the very-white leadership of Vince Desmond, has remained silent on the issue, largely because — IMO — Desmond is a fucking asshole dicksack. 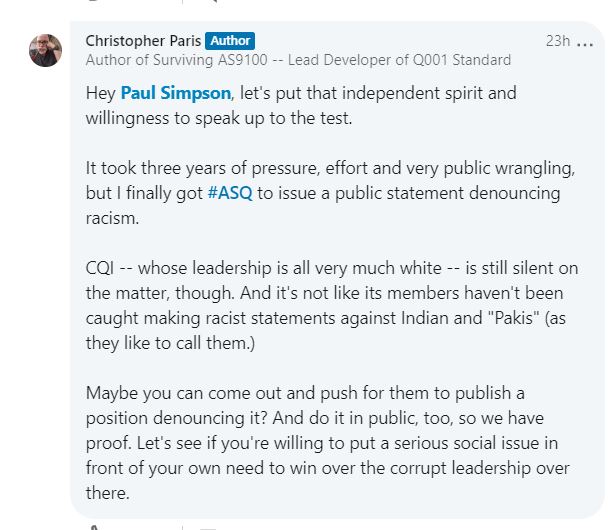 Simpson, however, dodged. This is stomach-churning sycophancy at its worst, so get ready:

So there you go. A white guy said that there is no racism because, well, he doesn’t know any racists. Good news for all the minorities in the UK: racism is all in your imagination!

But back in 2014 I wrote about when this CQI asshole said this racisty asshole thing. CQI and IRCA did nothing back then, and he’s still writing articles for them, and is listed as a CQI Approved Training Partner. CQI is a bag of dicks. White dicks.

Simpson is the top chair of the committee for drafting ISO 9001 which is supposed to represent people from all over the world, and not just pasty Anglos. Can any person of color on that committee seriously recognize his authority after such a dumb post?

Meanwhile, remember that Simpson did this immediately after boasting about his “ASQ Fellow status.” But, wait… didn’t ASQ just promise that they’d do things to prevent this sort of behavior by its members? Will they take action and strip Simpson of his membership?

Don’t count on it.

So we are unlikely to get Desmond and CQI to issue a statement against racism because it’s rife with cowardly toadies like Paul Simpson, Mark Braham, and their ilk. Which means if they can’t stand up to make a simple statement denouncing racism — one of the easiest damn things to do (unless you’re a racist) — do you really think they will stand up against the ISO HQ in Geneva, and tell them to stop injecting language into ISO 9001 by force? Do you think Simpson will force ISO to stop violating WTO rules demanding that developing nations (meaning non-white) get an equal shake at developing ISO 9001?

Complete and total cowards. This, Planet Earth, is why you can’t have nice things.