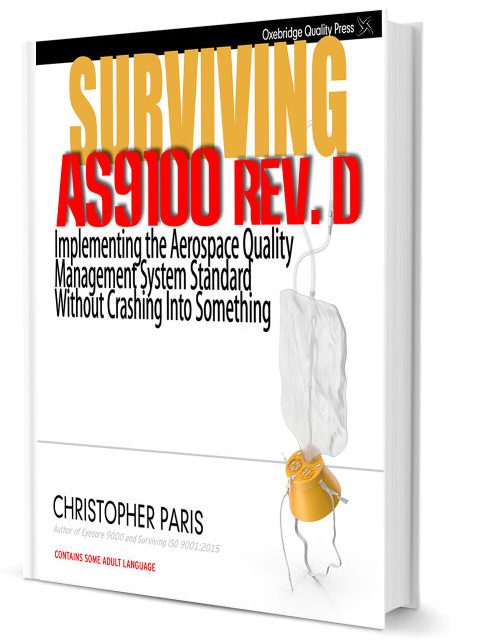 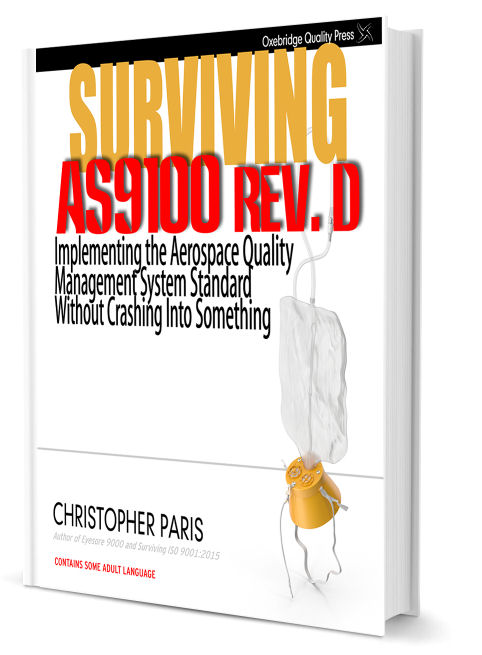 The only thing that’s generated more mail than our April Fool’s Day report on Oxebridge shutting down has been anxious aerospacers demanding to know when my next book, Surviving AS9100 Rev. D, is coming out. After all, it’s many months late.

The good news is that the manuscript is finished, and is now with the editors. Once their pass is complete, it will be off to the e-book producers and typesetters to convert into the proper final format, and then released on Amazon. And this time, an e-book (tablet reader) edition will be available as well as a hardcopy option for those who like to carry Oxebridge books into the bathroom with them.

Much like my last book, Surviving ISO 9001:2015, this one grew as it was being written. It’s not quite as large as the first book, but definitely has more content than originally planned. Originally conceived as a companion piece to Surviving ISO 9001, I decided that forcing people to buy the first book in order to understand the second one was shitty, so I re-wrote nearly all of the ISO 9001 base material before adding on the AS9100 stuff. Now readers of Surviving AS9100 won’t have to rely on the prior book at all, unless they really want the history of the backstabbing that went into ISO 9001’s development. Most AS9100 users don’t care about that, though.

I was on the fence about including material on AS9110 and AS9120, but am happy to say that I managed to add chapters on those standards as well. There’s material on ITAR, FOD and more. The book is lighter on the origins of AS9100, but does cover some of the behind-the-scenes maneuvering and Boeing’s outsized influence on the eventual product. Heck, Tim Lee’s name appears nearly 50 times alone, because everyone loves Tim Lee, and we all know he has a great sense of humor.

Hey, these guys wanted fame, so now they’ve got it.

I will say this: whereas the prior book came with an “Adult Language Warning” on the cover, the eventual product was fairly tame. Not so with Surviving AS9100. I really earned my own cover warning, and even had to edit myself a few times. One joke was so obscene, even I couldn’t face seeing it printed, and hit the backspace immediately.  The “f-bomb” appears nearly as many times as Tim Lee’s name, and in close proximity to it, so seriously — don’t buy this one if you’re intimidated by salty aerospace cusswords.

In related news, I’m happy to drop another secret on you: Surviving ISO 9001:2015 Second Edition is due out any day now, and that will also be available as both an e-book and paperback printed edition, available this time on Amazon. The Second Edition updates the text slightly, but buyers of the First Edition shouldn’t worry, they haven’t missed too much. The real reason for releasing a Second Edition was to release a hardcopy version, since a lot of people told me they still prefer actual books over reading complicated quality texts on their cell phone screens.

So stand by, as I will have an announcement on the release of these on Amazon soon.