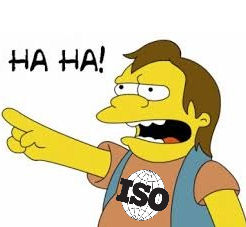 I’m putting this one in “opinion” and writing it myself as a commentary because the source on this is not vetted, and I can’t find a second party to confirm. Yes, we actually apply some journalistic rules to the Oxebridge blog.

In this case, it’s full-on, shadowy Deep Throat stuff. As we reported previously, at least one US registrar submitted false data to AC Nielsen on the number of companies certified to ISO 9001 in the United States. That data was then used by ISO in two of its last annual “ISO Survey” reports, which are the only metric the world has of ISO 9001 adoption rates.

The 2014 ISO Survey data showed a spike of 5,000 US certificates to ISO 9001 that was not clearly explained. The following year, the ISO Survey for 2015 was corrected, but the spike was simply moved from 2013 to 2014 with no explanation. As we previously reported, a source indicated that the spike was due to a single employee within a single US registrar:

The numbers were dramatically spiked by a single employee in the main office [of the first CB]. That employee wanted to give a bump to the US figures to shut down the argument that ISO 9001 was on the decline, and to give a false sense of stability in the US market. They were afraid that revealing low numbers in the US would dampen the adoption of the new [ISO 9001] 2015 revision, and the CBs are all hoping for a big bump from that revision. It looks like the other CB got cold feet and corrected some numbers for the next year’s Survey, but the numbers are still out of whack.

Now a source indicates that not only does ISO know which registrar falsified the data, the registrar in question fired the sale representative responsible for the manipulation. It does not appear that ISO will be issuing any corrected Survey results, however, which is troubling. ISO routinely uses the ISO Survey data as a marketing tool to sell more copies of ISO 9001, on the dubious argument that it’s “adopted worldwide.”

The source indicated it was out of fear of Oxebridge’s reporting that the sale rep was terminated.

Readers of this site know that I don’t shy away from naming names and pointing fingers directly at a registrar when the facts allow it. In this case, though, we simply don’t have enough facts. The information comes from a single source, and so far hasn’t been independently verified. The main question we always run this site’s reporting against is “would we lose a defamation lawsuit if we print this?” This ensures that the articles appearing on Oxebridge are clearly based on facts that are easily verified, and readily submitted to a court if necessary; other works are clearly marked opinion, and framed as such. The registrar in question — and it’s a company you know very well — would likely sue if we reported what we know in its current state, and frankly, I am not confident enough in the information to know if we’d have a decent defense. So I’m giving them the benefit of the doubt, but they should know (and we know they’re reading this) the information will eventually be vetted, and a hellstorm of controversy opened for them. Fair warning.

But for now I am leaving names out of it. If you’ve been watching some recent CB sales rep departures within the US market, you are likely to have an idea who we are talking about, but until I get some independent confirmation I will have to leave this piece as speculation.

ISO should, of course, take steps to ensure the accuracy of the data it publishes, and then publish corrections when the data is shown to have been falsified. Since ISO is simply a publishing company, it’s not likely to see this as a priority, however.