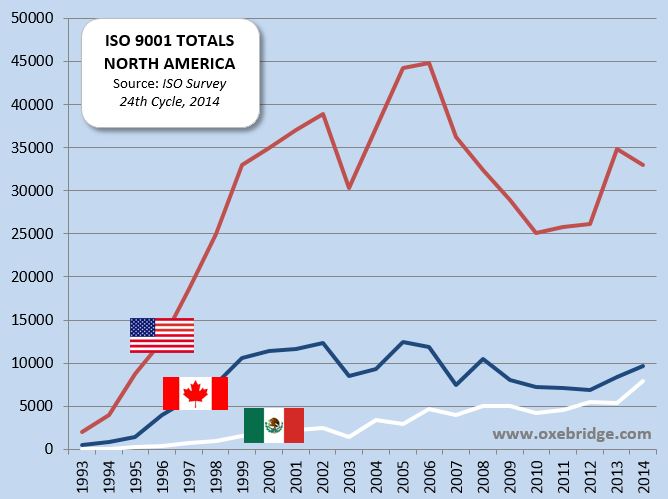 A source within a prominent North American certification body (CB) revealed to Oxebridge that it intentionally “spiked” the numbers of ISO 9001 certificates it issued in the US in 2013 by as much as 5,000, when reporting the data to the International Organization for Standardization (ISO) through its data-gathering partner, AC Nielsen. The source indicated that another North American CB did likewise, to a lesser degree, but later corrected the figures for the 2014 data.

ISO publishes an annual “ISO Survey” which features total figures of ISO 9001 certificates issued each year, based on data provided by IAF accredited certification bodies. The figures for the US had been on a nearly steady and precipitous decline since 2006, when the nation showed a peak of 44,270 certificates. By 2010 the US lost a total of 19,782 certificates, indicating a national defection away from ISO 9001. Thereafter, the US gained only slightly more than a 1,000 certificates by 2012.

Suddenly, in 2013, the US data jumped to show a total of 34,869 certificates, a gain of 8,692 over the previous year. The increase was not readily explained by any industry expert, since economic conditions had not improved significantly enough, nor had interest increased in ISO 9001, at that time. Now, a source within the US certification body industry reveals that at least two such CBs did falsify their data when reporting for the 2013 ISO Survey. According to the source, their own CB inflated their numbers by as much as 5,000, and another may have added up to 2,000, for a possible falsification of 7,000 certificates.

The source has requested to remain anonymous under fear of retribution by the industry.

If so, the ISO Survey data for the following year, 2014, would show a minor correction. That Survey reported a total of 33,008 certificates, a reduction of 1,861. The Oxebridge sources believes this correction was due to the 2nd CB getting “cold feet” and pulling the numbers before being discovered in later years. The false numbers from the first CB remain in place.

The numbers were dramatically spiked by a single employee in the main office [of the first CB]. That employee wanted to give a bump to the US figures to shut down the argument that ISO 9001 was on the decline, and to give a false sense of stability in the US market. They were afraid that revealing low numbers in the US would dampen the adoption of the new [ISO 9001] 2015 revision, and the CBs are all hoping for a big bump from that revision. It looks like the other CB got cold feet and corrected some numbers for the next year’s Survey, but the numbers are still out of whack.

The “cold feet” theory appears to be supported by the ISO Survey 2014 itself, which included an explanatory note that the US drop was due “1 major [CB] reporting significantly less certificates than in 2013.” If so, this means that ISO itself is likely aware of the falsification, but took no action.

The source indicated the same CB may have spiked the numbers for Canada and Mexico as well. A review of those figures also show similar unexplained spikes in 2013 and 2014, with Canada gaining 2,716 certificates over both years; Mexico lost 138 certificates in 2013 but then showed a dramatic 2014 jump of 2,538 certificates, the largest single-year increase in that country’s history. ISO explained the Mexico increase as due to “a larger participation of [CB] contributors from Mexico.” The source told Oxebridge that it is unclear if the CB employee was acting on orders from a higher authority within a larger international home office; since there is some evidence of similar unexplained spikes in other countries served by the CB, such as Spain, UK and Vietnam.

The ISO Survey data has been plagued with inaccuracies, and ISO has taken limited steps to course-correct the data in recent years, most notably by removing more than 116,000 allegedly counterfeit certificates from the Ukraine and Russian Federation. The numbers from China, which currently boasts 342,800 certificates, are expected to be at least partially inaccurate, but there is no way to confirm this due to the expectation that any false numbers would be coming from the Chinese government itself.

The reporting of data for the ISO Survey is not required by CBs, and efforts to get the IAF to make accurate reporting a mandatory accreditation requirement have been ignored.