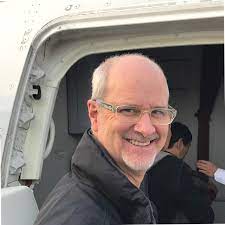 Meet Doug French, a retired executive from Boeing Commercial Airplanes (BCA). French found himself in an awkward situation after he attempted to defend Boeing in a thread on LinkedIn.

The cringefest came about after the International Aerospace Quality Group (IAQG) posted a link to a webinar given by Boeing’s Alan Daniels, called “The Importance of Standards Within the IAQG.” The post said:

The IAQG has 26 standards in place to assist in the quality management of member companies within the aerospace and defense industry. We wanted to break down the process of writing a standard and understand the basics and the importance of these requirements, so we invited Alan Daniels with Boeing company to be our guest and expand on this topic. Daniels serves as vice president of the AAQG and chair of the requirements for the IAQG.

So I commented by asking about the elephant in the room: “if the standards are that important, why hasn’t Boeing implemented any of them?”

You see, the dirty not-so-secret reality is that Boing mandates AS9100 and other certifications to its supply chain, but doesn’t actually certify its own companies to the standard. Worse, Daniels has never actually worked under a certified AS9100 system, and yet he’s heading up both the committees for ISO 9001 (in the US) and AS9100 (internationally.)

Enter French. He ran to Boeing’s defense by claiming that at Boeing “every standard [is] supported, embraced, and fully implemented across the corporate QMS.”

But he did go on to then admit, in the very next sentence, that only Boeing Distribution Services (BDS) was actually certified. The BCA company where he (and Daniels) worked is not. (OASIS confirms this.)

To defend his position further, he whipped out his resume to tell me “I know what I’m talking about“:

I pointed out that simply claiming you “embrace” a standard isn’t the same as certifying to it, and thus proving to the world you’ve actually implemented it. I asked him, “will Boeing suddenly allow its entire supply chain to skip AS9100 certification and simply claim ‘we embrace it’?”

Which is when French did the usual OEM thing, and got so smug he dropped his defenses and said all the quiet parts out loud: 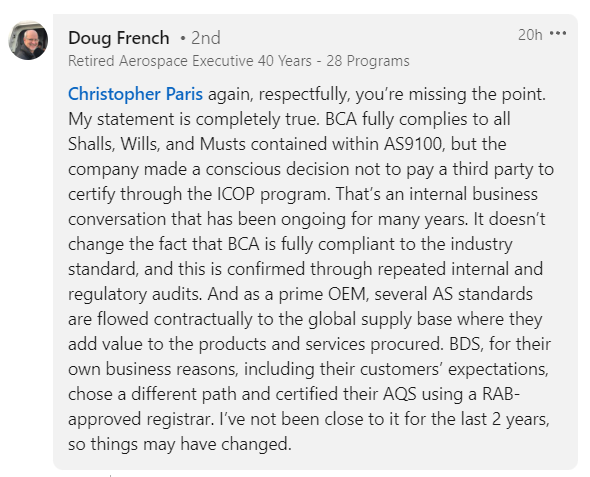 The main points to unpack there are that, first, Boeing is an OEM so doesn’t actually have to prove anything, and can just say it complies with standards and you — the unwashed idiots in the cheap seats — have to believe them. And, second, that Boeing didn’t opt for getting certified because they “made a conscious decision not to pay” for it.

So think about that: Boeing has so little confidence in AS9100 certification, that it made a “conscious decision” that there was no return on investment for them.

But you, meanwhile, have to suck it up because Boeing not only says so, they run the AS9100 scheme (that they don’t believe in.) And he dug in: 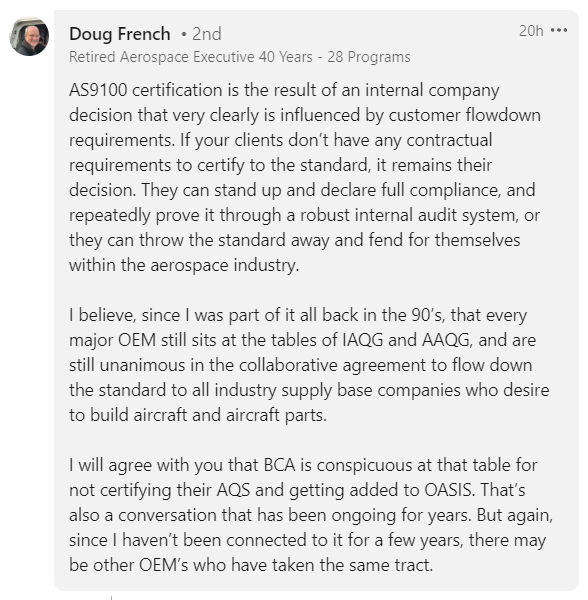 Read that first sentence again: “AS9100 certification is the result of an internal company decision that very clearly is influenced by customer flowdown requirements.”

This is the standard trope used by ISO and the other organizations that sit in power over these various schemes. They claim that such certifications are “voluntary” but then remind everyone that if you don’t obtain them, you will lose business. The suggestion is that if you don’t like it, you can still go open up an ice cream stand, and get the hell out of the aerospace industry.

That’s not voluntary, but there’s no convincing these people.

Ouch. I just said “these people.” Keep that in mind, as things spiral downwards even further.

French also just lied about “all the major OEMs” being in agreement and sitting at the table of IAQG and AAQG. Back in 2010 or so, I was with SpaceX and trying to get them a seat at AAQG for this very reason. SpaceX had been winning contracts originally expected to go to Boeing and Lockheed (and their merger, ULA), so it made sense that they should now be represented at AAQG. But another smug OEM representative, Jack Fletcher (retired from NASA), claimed they could attend and “sit in the back with everyone else.” When I pushed back, Fletcher spent the next few years trolling me online, at one point threatening to hit me with a baseball bat. He was very, very angry.

The truth is that there is no universal or legal definition of what companies are “aerospace OEMs” or “primes.” A tiny 2-man shop may be the original equipment manufacturer of an aircraft part, and may well hold prime contracts with the government, but they’re not going to get invited to attend IAQG meetings. This “OEM” title is something Being and Lockheed use to keep the riff-raff out of their hotel conference rooms. They decide who gets into the IAQG and AAQG, and can deny access to companies like SpaceX and Blue Origin and Relativity Space just out of spite.

So, French ignored the SpaceX question entirely while tripling-down on his claim that OEMs can just do whatever they want, and companies that don’t like it can just exit the industry.

Then — and you cannot make this shit up — he then claimed my grilling of him was “emotional hate speech.” 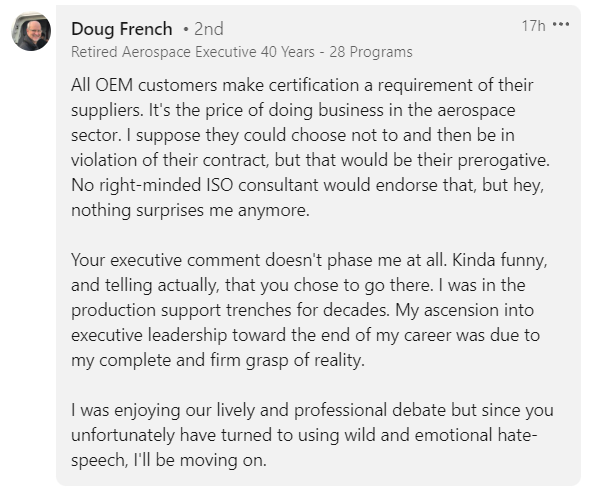 As a result, French said out loud what everyone already knows — Boeing is too cheap to pay for AS9100 certification even as they impose it on their suppliers — while simultaneously giving a masterclass in rich, white privilege and entitlement. Anyone even mildly criticizing him about a professional topic must be engaged in “hate speech” because this vanilla marshmallow has never had to experience actual hate speech.

Remember that Boeing demands AS9100 certification while at the same time demanding “cost reductions” from the very same suppliers they impose this cost on. Sigh.

If French had intended to make Boeing and the IAQG look good, he failed in a spectacular, fiery manner.