Lax oversight by the Australian accreditation body NATA was revealed during a royal inquiry surrounding a Queensland forensics lab that has been accused of poor testing practices. NATA’s compliance with accreditation standards is overseen by the Asia Pacific Accreditation Cooperation (APAC), but questions of cronyism have arisen since APAC named NATA’s CEO to its Board earlier this year.

In 2013, Shandee Blackburn was murdered when she was stabbed more than 20 times. In 2017, her ex-boyfriend John Peros was found guilty of the murder based on DNA testing performed by the Queensland police forensics laboratory. Subsequent investigations by forensics biologist Kirsty Wright found “a spate of alleged problems in the case, including the lab’s failure to detect any DNA in a fresh pool of blood or from a tapelift taken from Shandee’s left forearm.” From reporting provided by the Australian (paywall):

Dr. Wright found the government-run lab did not complete full DNA testing on a number of samples, including on a large knife found hidden under a rock in a canefield that police considered could have been the murder weapon and a blood soaked T-shirt found near the scene.

There was also a failure of the lab to detect Mr. Peros’s trace DNA in his own car.

Mr. Peros travelled many thousands of kilometres a year in the car but the lab said no trace DNA was detected on police swabs and tape lifts from the steering wheel, handbrake, gear shift, driver’s seat and front-door ­handles and window wind – all surfaces that as the driver he regularly touched.

Dr. Wright’s investigation led the Australian government to launch an official Commission of Inquiry into the laboratory, which uncovered additional controversies. Most worrying was the revelation that the lab had dramatically, and arbitrarily, reduced its sampling rates so that it could produce final test reports while performing less actual testing.

Forensic experts Rebecca ­Kogios and Heidi Baker found that the lab “had failed to meet best practice on a series of measures, including the decision not to examine samples below an unprecedented testing threshold and a factory-style approach to testing evidence from violent crimes.” Per the Australian:

Dr. Kogios said the lab had been trying to introduce Y-STR testing for years but had been “hamstrung” by pressures to get results out the door and a lack of research funding.

Stood-down managing scientist Cathie Allen, who concluded four days of evidence on Tuesday, said she had been under sustained pressure from senior bureaucrats to cut costs and her previous ­requests for extra funding had not progressed.

When questioned, investigators allege that Allen continued to lie under oath, accusing her of lying over 20 times in just one 3-hour deposition. This then impacted the investigations into other murders as well as rapes:

Senior police now say they were grossly misled by Ms. Allen and Mr. Howes about the consequences of the threshold. Thousands of samples with potentially vital evidence in crimes including murders and rapes went untested after the lab introduced the threshold in February 2018.

Even the methods of gathering DNA have been found to be below standards. According to reporting by Australia’s ABC News:

Counsel … today told the inquiry that at the time of Ms. Blackburn’s death, police used a wetting agent that contained 70 per cent alcohol to collect blood samples, which “may not be best practice.” Walter Sofronoff KC, who is conducting the inquiry, responded that it could be concluded that swabs submitted by police could have been unreliable before arriving at the lab.

The Australian coroner re-opened the Blackburn murder case in 2022 based on the reporting of Dr. Wright after it appeared in the Shandee’s Story podcast, which is published by the Australian new outlet. 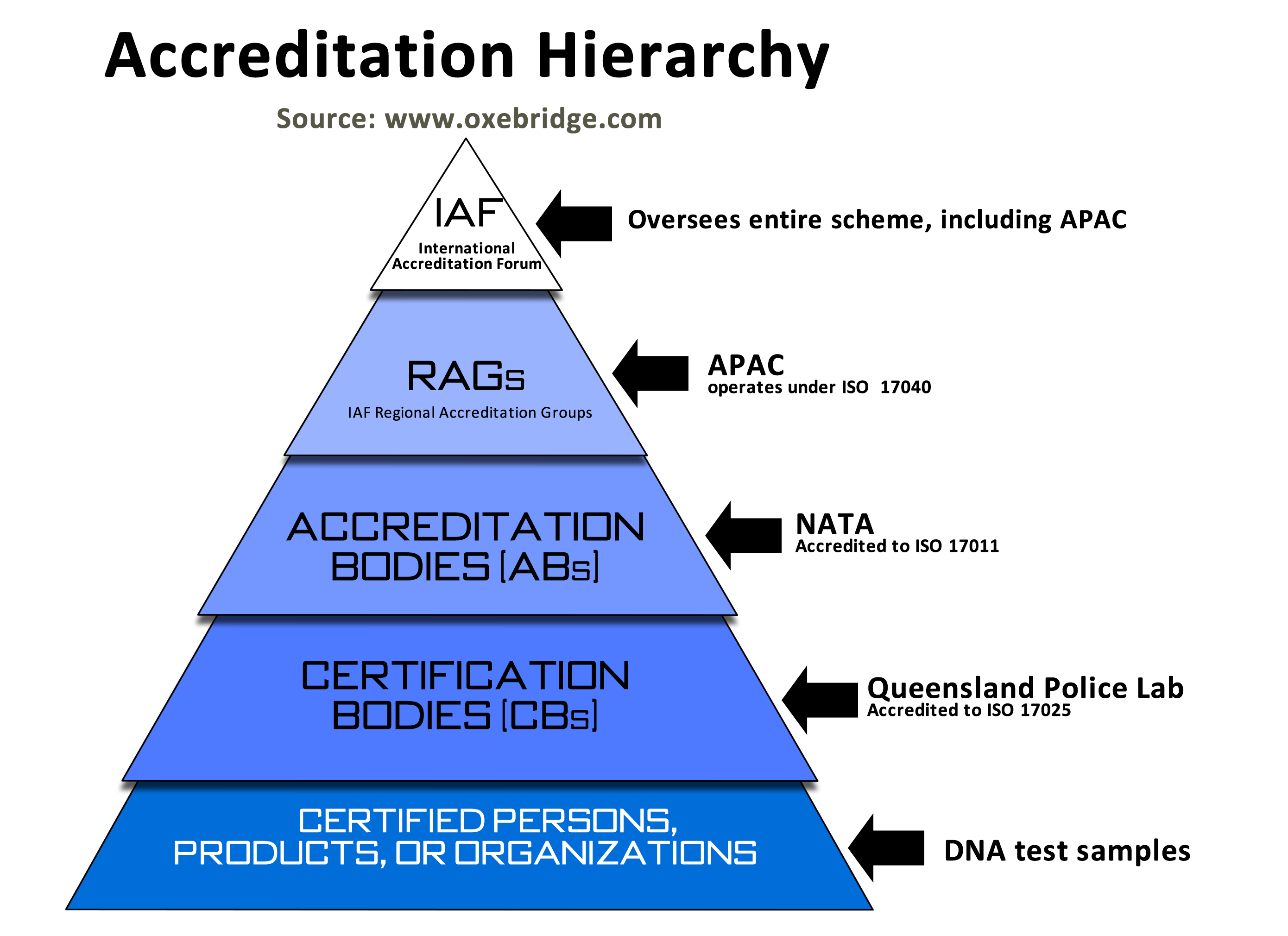 The Queensland laboratory is accredited to ISO 17025 by the National Association of Testing Authorities, an official Australian accreditation body. The  ISO 17025 standard is aimed at testing laboratories and aims to ensure trusted, valid, and repeatable results of lab testing.

In its reporting, the Australian notes that NATA’s lax oversight has now become a key point in the investigation:

[Dr.] Wright, who exposed the lab’s failures in The Australian’s podcast Shandee’s Story, believes the national quality framework was insufficient given the Queensland lab had maintained accreditation for more than 20 years.

“What the inquiry is finding about the serious scientific issues and poor service provided by the lab is not consistent with what NATA states its accreditation provides,” she said.

According to NATA, its accreditation “provides an assurance of the competence, impartiality and integrity of facilities”.

For almost every element of our lives, we need to have confidence in the products and services we use every day.

NATA accreditation provides that confidence. It ensures accredited organisations can be trusted to deliver on performance and protection.

Being a NATA accredited facility builds credibility in an organisation’s products and services.

The Queensland lab has held NATA accreditation for over 20 years, and the Australian reported that NATA had conducted at least two assessments of the lab after it had artificially reduced the DNA test sampling levels.

It is therefore not clear how NATA could have conducted at least two audits of the lab without having included an assessment of its compliance with clause 7.3.1.

While this failure could be attributed to incompetence on the part of NATA auditors, this does not explain why NATA has not since de-accredited the laboratory given the public revelations. As of this writing, the laboratory remains fully accredited by NATA to ISO 17025 for the scope of forensic testing activities:

The retention of accreditation after scandals are unveiled is a common feature within the ISO certification scheme, where there is little to no enforcement of the standards which are nevertheless attested to in official documents.

For its part, NATA is obligated to operate under a different standard, ISO 17011. That standard aims to ensure that accreditation bodies, such as NATA, operate with competence, objectivity, and issue accreditations only to organizations that comply with the applicable standards.

To ensure NATA abides by ISO 17011, its accreditation is supposed to be overseen by APAC. As a “Full Member” of APAC, NATA is obligated to comply with APAC procedure GOV-002, which requires: “Full Members to operate in compliance with the requirements of ISO/IEC 17011 and relevant mandatory IAF, ILAC and APAC documents.” APAC is then supposed to conduct oversight audits of NATA against the requirements of ISO 17011.

Once again, it appears the oversight bodies have ignored major clauses of the standards when conducting such audits.

ISO 17011 clause 7.11.2 then requires that NATA revoke a laboratory’s accreditation “where there is evidence of fraudulent behavior, or the conformity assessment body intentionally provides false information or conceals information.” Clause 9.5 of that standard also demands that NATA apply “corrective action” and investigation of its own inability to uncover the Queensland lab’s deficiencies. 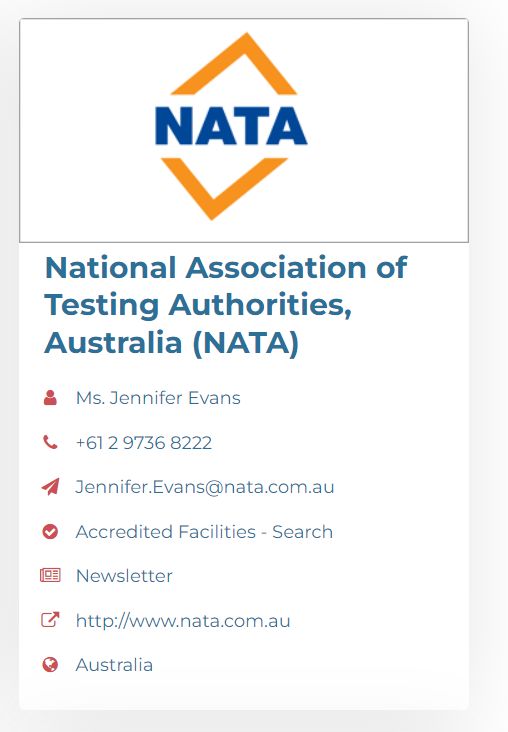 Membership listing of NATA on the APAC official directory

It appears that none of that has happened to date, raising questions as to why APAC has not enforced its procedures and ejected NATA. As of this writing, NATA remains a Full Member of APAC.

The APAC organizational chart suggests a reason for this lack of oversight. Raising the specters of cronyism and conflicts of interest, in June 2022 APAC announced that NATA CEO Jennifer Evans had been given the position of APAC Chair. Evans had previously been APAC’s Vice-Chair.

The incestuous nature of the arrangement may explain why APAC failed to conduct objective and independent oversight of NATA, given Evan’s close role in the organization dating back for a decade or more. Per APAC constitution GOV-001, the role of the APAC Chair includes “overseeing the business of APAC, in particular, the implementation of decisions taken by the APAC General Assembly, [and] ensuring the proper functioning of APAC.” 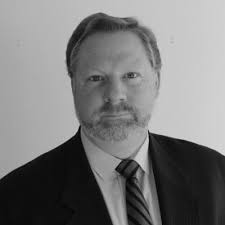 In reality, despite a complex organizational chart and dense layer of procedures, APAC is run by a single individual, Graeme Drake. Drake — who prefers to be called “GED” by the APAC members — acts as “Secretary” of APAC, and sources confirmed that he largely runs APAC out of his private home. APAC has pushed to increase its membership rolls, allowing members from countries typically seen as outside the “Asia-Pacific” region such as organizations from North America. Sources report that Drake’s pay is tied to membership dues, and so preassing for the expansion of APAC results in his personal enrichment.

Drake personally processes all communications sent to APAC, including formal complaints. To date, Drake has ignored or shut down every complaint filed by Oxebridge against APAC members, utilizing a variety of justifications to do so.

One source close to APAC reported that the group is a “make-work project” for Drake, and that he has “no interest in actual oversight, since doing so would risk his personal income.”

Drake has personally fought against processing a major complaint revealing that potentially lethal counterfeit medical examination gloves, used during chemotherapy treatments, were sold to international markets. Drake has consistently quoted a labyrinth of “procedures” in order to stall that investigation.

APAC has refused to honor an IAF mandate that accreditation activities be stopped in Russia, since its invasion of Ukraine.

Multiple companies in Malaysia were found to be using slave labor to produce medical gloves and suffered a US import ban, but continue to be fully accredited. The accreditation body in those cases was UKAS, out of the United Kingdom; APAC has argued that UKAS is not subject to APAC oversight because it is a member of the European regional group EA. The IAF pyramid arrangement, however, suggests that such matters can be handled across regions and borders. Drake has applied no pressure on EA to enforce the rules for companies operating within APAC’s region.

For decades, aircraft component manufacturers in Japan have been falsifying test data of key structural materials, resulting in a major black eye for that country’s reputation for “high quality.” Consistently, three Japanese accreditation bodies have been found to have ignored the issues, continuing to allow potentially defective aircraft parts to be sold and installed. The Japanese bodies are members of APAC and yet has never taken action to rein in the corrupt practices.

In an email accidentally sent to Oxebridge, Drake is seen discussing how he performs a “quarterly sweep of complaints” in order to support the accreditation bodies in APAC’s stable. The email revealed the chummy nature between “GED” and the bodies he purports to oversee.

For its part, APAC is supposed to be overseen by the International Accreditation Forum (IAF), which acts as the topmost authority in the ISO certification scheme, But, like APAC, the OAF has shown no stomach for ensuring its regional bodies — like APAC — abide by its rules or comply with ISO standards. Complaints against APAC sent to IAF have also gone unanswered or dismissed out of hand.

NATA is also a member of the International Laboratory Accreditation Cooperation (ILAC), which is slated to merge with IAF next year. ILAC has also taken no action on the matter.