In response to an escalated complaint filed with the US accreditation body UAF, against the registrar TNV Certifications, the bodies falsely claimed Oxebridge was engaged in extortion. The claim represents the latest escalation against Oxebridge by bad-acting registrars and accreditation bodies, and may result in legal action.

Oxebridge originally filed a complaint against TNV in September of 2019, alleging violations of ISO 17021 accreditation rules. TNV threw out the complaint after only 40 minutes of consideration, and threatened legal action against Oxebridge for filing it. 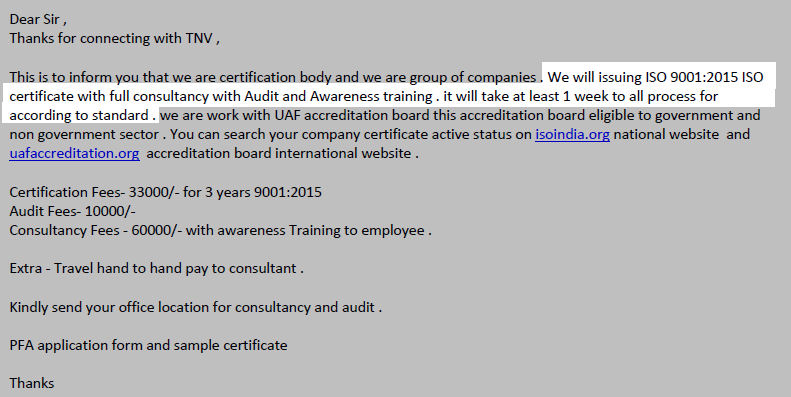 In its response to Oxebridge, TNV Director Pragyesh Singh threatened to sue, claiming the complaint was “fake news.”

Singh claims to have been a minor Bollywood “film director,” and sources tell Oxebridge he adopts a “tough guy” posture that often skirts Indian law.

Violating its own procedures, APAC then refused to process the complaint, throwing it back to UAF and granting them an additional month to answer the complaint.

The UAF has now responded, in a rambling and largely incoherent response that does not address the specific allegations made against TNV. Instead, UAF accepts TNV’s answer that the matter was due to a “clerical error,” and that some of the TNV websites involved in dubious activities are not part of its organization. The response did not address the email evidence provided, which linked to actual TNV websites known to be within the scope of accreditation.

Making matters worse, UAF adopted positions held by TNV as a reason for not providing details on its investigation, which Oxebridge believes did not occur. UAF Senior Executive Yuliya V. Lalova wrote:

TNV has requested us not to share the details of the conclusion of our investigations with oxebridge because of the following reasons:

– TNV claims that oxebridge’s complaint was with a vested interest.

– TNV claims that oxebridge might be getting paid by TNV competitors for raising clerical mistakes as oxebridge publishes all the information on his portal. The published clerical error on the website is taken as a tool by competitors to secure business by showing this type of communication.

– TNV claims that oxebridge intends to extort money from targeted agencies as for this, oxebridge has made an alternative arrangement to donate to its website.

The response shows once again that accreditation bodies work to protect their accredited registrars, rather than process complaints in order to ensure the validity of certifications.

Oxebridge has not been able to confirm that Lalova exists, or if she does, that she works for UAF. The accreditation body has a long history of using obfuscated names to hide the identities of its owners and employers. Oxebridge investigated and found it was operated by a medical doctor, Tejwant Chandi, and his family. Other names of alleged employees appear to be either false names, or for individuals outside of the United States without any social media accounts. At one point, the UAF’s head of accreditation was “Jobin Singh,” who was revealed to be Jobin Singh Chandi, the son of the owner. He has since allegedly quit the company.

APAC indicated the current administrator is Parveen Sadana, which matches APAC’s current records. Sadana also does not appear to have worked for UAF in many years, and currently operates at least one certification body out of India. As a result, it appears APAC has no updated records of who, exactly, operates UAF either.

The Lalova email meets the legal requirements for libel and defamation under US law, in that the claim was false, made to harm Oxebridge, and then circulated to third parties. The UAF email was copied to representatives of the IAF, APAC and the Chinese accreditation body CNAS.

Whereas libel is subject to civil penalties in the US, because the statements were likely made by TNV’s head Singh, they would also fall under Indian law. In that country, libel is a criminal act, subject to criminal fines and imprisonment.

The IAF and APAC have not responded, despite the Lalova email clearly providing evidence that it was not only not upholding ISO 17021 on TNV but was itself violating ISO 17011 — the standard for accreditation bodies — which prohibits an accreditation body from engaging in reprisals against complainants.

The next step would be to escalate the complaint against UAF to APAC. APAC and its director Graeme Drake, however, have routinely worked to protect accreditation bodies, even in cases where crimes were alleged.

A core principle of accreditation, mandated by the World Trade Organization and enshrined in the various ISO accreditation standards, is that bodies must exhibit “openness to complaints,” and not retaliate against complainants. The IAF actors have routinely violated this requirement, often resorting to empty threats against complainants such as Oxebridge.

The Oxebridge ISO Whistleblower Program has resulted in over 100 separate investigations in abuse and corruption by accredited bodies and their oversight agencies. It has led to multiple de-accreditation of some organizations, and at least one criminal investigation which is ongoing. At no point has Oxebridge attempted to solicit money from the subjects of investigations in order to get them shut down.

UPDATE: 19 August 2020, 2:40 PM. Within minutes of this article being published, UAF updated Oxebridge with what appears to be a new stance. UAF now claims it will advise Oxebridge of the complaint results after all. UAF also writes that it is investigating the validity of TNV’s claims that Oxebridge has a “vested interest” in pursuing complaints, meaning UAF may be investigating Oxebridge itself. If so, this would represent further violations of ISO 17011 by UAF.

However, the exact meaning of the UAF position is unclear, due to poor wording, and may mean something entirely different.

We will certainly revert after completion of the review of the claim submitted by TNV regarding Oxebridge’s vested interest. We will also revert regarding the violation of ISO 17021 requirements on “openness to complaints.” We hope to complete the assessment by the first week of September and will send you our findings before September 15, 2020.

UPDATE: 20 August 2020: TNV’s Pragyesh Singh has threatened additional legal action against Oxebridge, and the matter is now being referred to attorneys in the US and India. For unknown reasons, Singh simultaneously threatened litigation against two trademark attorneys with the US Patent and Trademark Office, claiming they work for Oxebridge, as well as some unknown proprietors of a Florida-based puppy adoption service. The new threats have been added to the UAF file and the accreditation body has been asked to take action, as Oxebridge argues they display further violations of ISO 17021 by TNV and Singh. Singh wrote the threat himself, apparently not electing to pay to have a solicitor do so.