Meet Aline Cohen of QSE Academy, an ISO 9001 consulting firm that offers a $289 template kit, among other things. Ms. Cohen thought it would be a good idea to post on the LinkedIn ISO 9001 group with some clever blog posts that, at first blush, appeared legitimate. But she did so without realizing that it took me all of a day to realize that “Aline Cohen” doesn’t actually exist, and that QSE Academy was dealing in stolen intellectual property.

The LinkedIn profile for Cohen uses a photo for a real California executive, Chelsea Pyrzenski of HireRight. Ms.Pyrzenski is an accomplished HR director with stints at major corporations like DirecTV, Vizio and the NFL. She’s a real person, and clearly not selling ripoff ISO template kits, needless to say.

The URL for Cohen’s LinkedIn profile hints at the actual user’s real nationality; the link is “www.linkedin.com/in/hafsa-qse-services/” — the word “hafsa” is a female Arabic name. [UPDATE: see below, actual user was confirmed as Hafsa Jouhri.]

The profiles for both Cohen and QSE Academy then repeatedly claim the company operates out of California, but they spell it “Californie,” adopting the French spelling. Obviously, French is not the main language of California, nor do California companies have UK phone numbers, such as that listed on the QSE Academy website. The street address given for their alleged California operation — 34 San Antonio Road, Mountain View CA — doesn’t exist; addresses on that street start at around 400. 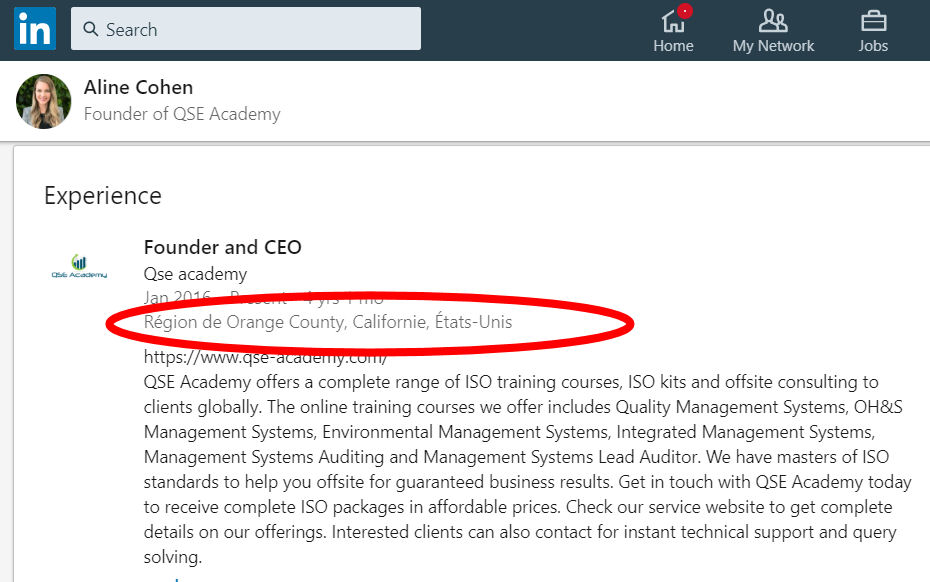 The website then hits all the usual suspicious buttons. It claims that the company is dedicated to “transparency” about its performance, and then falsely claims that it has 1600 clients, over 1800 projects, and yet 0 (as in ZERO) audit nonconformities. That’s a lie, pure and simple.

Making matters worse, their template kits appear to be built on stolen copies of the Oxebridge Totally Free ISO 9001 QMS kit. The idiots at QSE Academy thought it would be a good idea to include a photo of one of the documents, the procedure for Context of the Organization, and the text is identical to that from my kit. I know this because I literally wrote it myself.

To get around the need to use any customization software, the QSE Academy people seem to have replaced all the prompts for customization with generic phrases, making the kit even less customized, and thus much worse.

In some cases, QSE simply renamed the Oxebridge files slightly — the COTO Log becomes the “Issues Log,” for example. But in other cases, they kept the names of the Oxebridge files down to the naming file convention I use, which is unique to Oxebridge (and thus easy to identify when the documents are stolen.) From the listed manifest of QMS documents sold by QSE Academy, it does appear that dozens of the documents were stolen from Oxebridge, comprising the bulk of their kit.

Of course, all of this is illegal. From stealing the identity of an actual California HR executive, to intellectual property theft of Oxebridge’s licensed kit. Illegal.

I called their UK number, but there was no answer, even though it was early afternoon in the UK. Likewise, their website was registered through an anonymizer service, so there are no records of who filed for the domain name. The website itself is completely devoid of any human names whatsoever, so there’s no way to identify who runs the company, who their consultants are, nor any way to vet their outlandish claims of excellence.  It also claims to have up to 200 employees which — face it — we know is outright bullshit. No ISO consulting company anywhere has 200 employees.

An ASQ Fellow from LinkedIn who claimed to have used them says he can’t remember having met anyone from the company, but is going back to check his records. I advised him that if he purchased a kit from them, he got robbed.

One of the former US TAG members — Baskar Kotte — endorsed them on LinkedIn, so I’ve reached out to Baskar to see what that’s about.

The scandal mimics that of ISO 9001 Simplified, which runs a similarly obfuscated website operation, hiding its real owners behind a wall of anonymity. That outfit featured a number of fake reviews of ISO template kits on an allegedly separate website, the ISO 9001 Council, giving itself a high ranking while defaming the products of competitors, including Oxebridge. Upon scratching, that site had ties to senior US TAG leaders such as Jack West and Charles Cianfrani, but it was never clear if it was their product or someone reselling it. They pulled the reviews when I confronted them with the possibility of legal action.

In general, most of the paid kits are sold by shady operations run by hidden individuals, or by companies that then rope you into some sort of subscription service to maintain the QMS afterward. think about it: anyone charging for a template kit is already morally lacking, as kits are generally a bad idea. I released my kit to counter this phenomenon, while acknowledging that many companies are just dead-set on using a kit, and won’t stop. I figured they can use my free kit and get it out of their system.

But I’ve been clear that consultants are not to use the kit under any circumstances, and that if they steal it and resell it, I will sue them into oblivion. So far, some 12 consultancies have been caught using the kit, and all have ceased before any lawsuit was launched. (These companies rarely have the money to pay for a lawsuit, because — let’s face it — they’re selling ISO template kits.)

So, QSE Academy: you’re on notice. I know you’re reading this. From your own website, it looks like you owe me the money for up to 1600 clients at about $300 a pop. Do the math.

I suspect the website will be scrubbed about 24 hours from now, and the operator will go underground. As in more underground, that is.

UPDATE: Within minutes of posting this, “Aline Cohen” emailed me, apologizing and blaming the mixup on an unknown contractor they hired through Upwork. The signature line of Cohen’s email included an address which combines a street in Wales with a town in England, and then includes a postcode that makes no sense. I’ve verified with folks in the UK and they confirm the address isn’t real.

Cohen then wrote to admit it was a fake name, saying, “We wanted to promote the website, but at the same time couldn’t do it with real profile, as that can make us loose [sic] our current jobs.”

Email trace data revealed they were actually sent from a Moroccan cell phone owned by Hafsa Jouhri. That matches the first name in the LinkedIn URL for Aline Cohen. A quick search shows that Jourhi is a QMS consultant from Morocco, who also works for GLM Consulting in Morrocco. The website for GLM includes the same identical stock model photos and page layout as that of QSE Academy, but is written in French. The photo for Jourhi appears legitimate. Jourhi’s primary language is French.

Which means we now have a person behind this, and a location. That allows us to know which local laws apply, and how to enforce them.

Jouhri has claimed the consultant who stole the Oxebridge kit documents was Kamran Vardag of Opex Solutions in Pakistan. She claims they purchased through through his page on Freelancer.com here. His LinkedIn profile is here.