The ISO Whistleblower Program is proving effective, with a new complaint landing one CB into full suspension only hours after filing. A formal Whistleblower report showed the Dohar-based registrar “QACS” (QA Certification Services Pvt. Ltd.) was working a bit too closely with Dohar-based consultancy “Al Raeda Business Consulting.” A formal proposal for ISO 9001 certification issued by al Raeda included simultaneous consulting and certification, with the QACS logo and pricing embedded in the proposal itself. 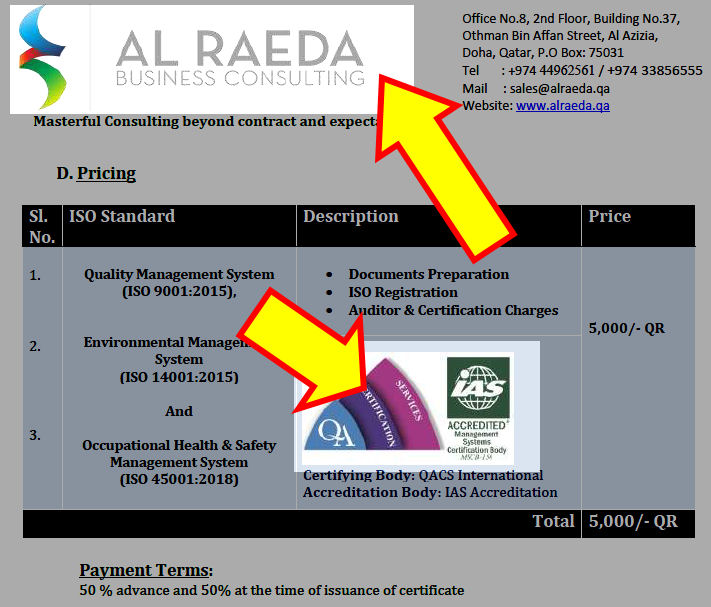 ISO 17021-1 prohibits the marketing of ISO consulting and certification alongside each other.

Oxebridge investigated and found further ties between the two companies, including the fact that they share the same business address, down to the office number. Oxebridge filed a complaint with QACS and copied it to their accreditation body, IAS. In a remarkable turn, IAS immediately suspended the accreditation of QACS, not even waiting for a formal investigation.

QACS then responded with a hostile and defamatory email to Oxebridge, in which its representative Jayesh Agrawal falsely accused Oxebridge of filing the complaint “in hurry without any communication with QACS, just to make mater sensualise [sic] in your whistle Blower program without bothering to verify the evidences available with you.”

Agrawal admitted that QACS shares an office with “Al Raeda Technologies” but denied the two companies are related. An analysis of their two logos show they are identical except for background color, however:

Agrawal then tried to imply that Oxebridge had an ulterior motive for filing the complaint, saying, “[we] came to know that your organization is also involved in consultancy and also proving training which you claim to be equivalent to ANSI/ A2LA.” Oxebridge has at no time ever claimed to perform the same services as either ANSI, which is a publishing body, or A2LA, which offers laboratory accreditation.

The response only increases the likelihood that QACS will lose its accreditation. All eyes are on IAS to see how it handles managing CB violations now that IAS itself faces an investigation and allegations that it has been too lenient on its CBs.

Despite a flood of fake certificates and rules violations by CBs in India and the Middle East, the International Accreditation Forum has been absent in ensuring ISO 9001 certificates are only under formal accreditation rules.