IAS entered the US market as a competitor to accreditation behemoth ANAB, but has not reached a fraction of ANAB’s US market, instead opting to focus on serving CBs in India and the Middle East by offering them an accreditation with a US address. IAS has defended certification bodies who offer ultra-low cost services, primarily relying on underpaid Indian auditors, insisting that ISO and IAF rules do not dictate audit pricing.

The Oxebridge complaint was prompted by multiple incidents spanning over two years. Since 2017, Oxebridge has been inundated with offers to form “partnerships” or marketing alliances with various IAS-accredited CBs, despite rules in ISO 17021-1 indicating that CBs cannot engage in such relationships with consulting firms. In other cases, various CBs claiming to hold IAS accreditation were found to be using the logo without permission, pointing to a significant problem on the part of IAS with regard to enforcing the validity of its mark. ISO 17011 demands that accreditation bodies take actions against companies that use their mark illegally, up to an including “legal action,” but IAS has not done so, allowing its mark to proliferate throughout Asia.

The complaint also escalates two serious concerns previously raised against the IAS-accredited certification bodies AQC Middle East FZE and ACS W3 Solutionz. The two CBs were reported through Oxebridge’s ISO Whistleblower Program as having quoted dramatically low prices for a simultaneous ISO 9001, ISO 14001 and ISO 45001 integrated management system certification. When Oxebridge analyzed the quotes, it found that the CBs had violated the “minimum audit duration” rules codified in IAF Mandatory Document #5 (MD5). That document dictates the length of audits based on employee count and other factors, and the IAS-accredited CBs appear to have ignored these rules in order to assure a low price. 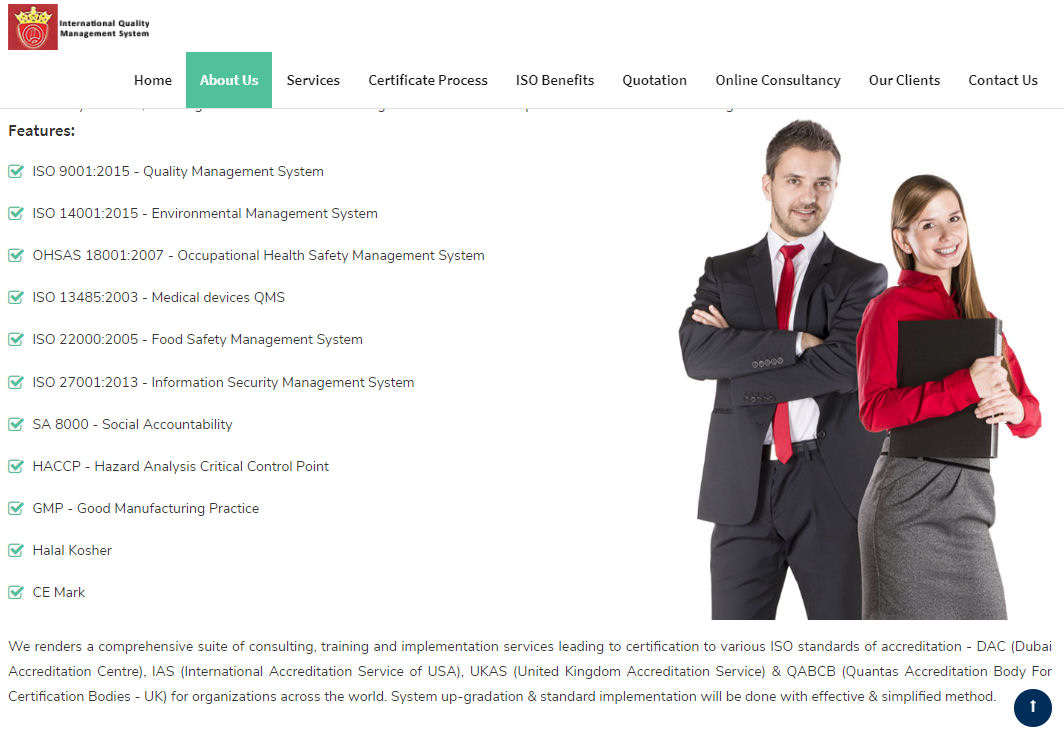 Website for IQMS which offers both ISO 9001 certification and consulting, while falsely claiming IAS and other accreditations. (Click to enlarge)

In another case, a CB responded to Oxebridge’s complaints by attaching a confidential application form submitted by their client in order to bolster their defense. That resulted in the CB violating additional requirements set forth in ISO 17021-1 requiring that CBs ensure the confidentiality of client information.

Both CBs responded to Oxebridge by denying the complaints, making the unusual argument that CBs cannot violate ISO 17021-1 or IAF MD5 during quoting, since at that point no contract has been signed nor any certificate issued. Oxebridge then escalated both complaints to IAS for adjudication by their accreditation body.

IAS then denied the complaints, siding with its CBs entirely and closing them without action. IAS then parroted nearly exactly the excuses provided by the CBs. In his official reply to the AQC Middle East FZE complaint, IAS Vice President Mohan Sabaratnam wrote:

Upon receiving an enquiry AQC submitted a Quotation, no application was signed or agreed at this point. No audit program was established and no audit dates were confirmed so I am confused as to how Oxebridge can claim that AQC is not following MD5.

The above organization informed us that it had not issued the certificate to the client.

With regard to the complaint against its CB violating confidentiality rules, IAS ignored the issue entirely, forcing Oxebridge to add an additional allegation that IAS violated ISO 17011 rules on complaints processing.

IAS’ ruling opens it to accusations that it is endorsing “bait and switch” pricing by its CBs. Taking the Sabaratnam ruling to its natural conclusion, if a CB is not held to audit duration rules MD5 during quoting, it can thus quote single-day audits for any scope whatsoever, at  highly reduced rates. Then, per Sabaratnam’s logic, once the contract is signed, MD5 would apply, forcing the CB to re-quote the work and increase the number of audit days, and thus the cost. Such “bait and switch” is likely illegal in the US under the Lanham Act and other consumer and B2B regulations, as well as the laws of other countries.

It does not appear that Mr. Sabaratnam consulted with legal counsel before issuing his official ruling.

The next highest authority in the ISO Accreditation scheme “Regional Accreditation Body,” which in this case is APAC. IAF explained that this is because the bulk of IAS’ work is in Asia, despite their US address.

If APAC does not rule to uphold the complaint, it will mean that CBs can rightfully ignore the entirety of ISO 17021-1 and the various IAF mandatory documents until after a certificate is issued, turning the accreditation scheme on its head. This would allow CBs to perform marketing, quoting and even audits in whatever manner they choose, violating all normal accreditation rules, saying the rules don’t apply until after the audit is complete and the certificate issued.

Such a ruling would also cause problems for the entire accreditation scheme which obtains US Federal Government contracts on the promise that the scheme works as advertised, through the ISO 17021 rules.

Traditionally, the IAF rules on the side of the Accreditation Bodies and CBs, since it sits at the top of the revenue pyramid. Oxebridge has only had to escalate a complaint once to IAF, when UKAS failed to act after its logo — and that of its CB Lloyds Register QA — was found on a forged contract document intended to gain illegal bidding access to a lucrative oil contract. Rather than enforce their mark or report the crime to the authorities, Lloyds and UKAS rewarded the company responsible for the forgery with a legitimate certificate, in exchange for a 3-year auditing contract, helping clean up the crime. The regional body European Accreditation (EA) ruled that nothing wrong had occurred, but did not give any explanation to justify the ruling.

Any ruling by APAC is likely to be similarly opaque.