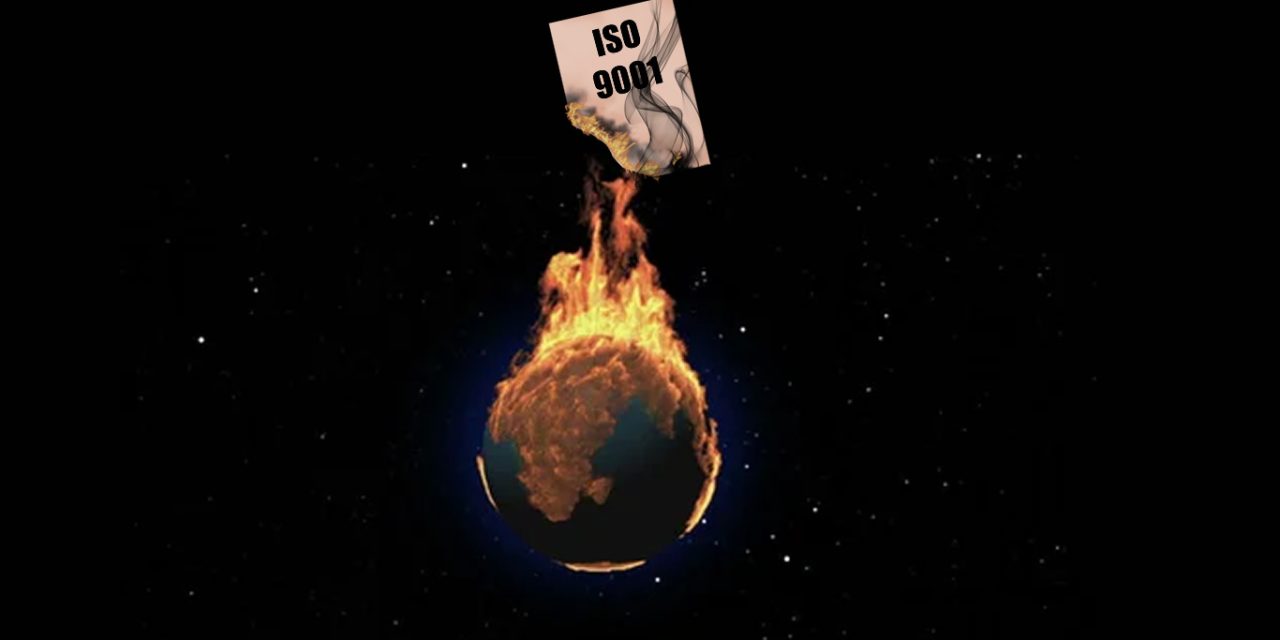 ISO TC 176 is pressing ahead with its “early revision” of ISO 9001, despite multiple official votes by ISO member nations not to revise the standard. To get around this, TC 176 is publicly insisting the work doesn’t mean they will actually publish it, but want to have it ready just in case. Obviously, that’s ludicrous, as you would never go through the trouble of starting work on something you didn’t intend to finish. So they are going to publish it, no matter what; the hesitation is to buy ISO some time to develop a narrative they can sell to the world to justify why they violated their own procedures, WTO regulations, and the will of ISO members, all of which puts ISO’s legal entity status in Switzerland at risk.

ISO Role as NGO in Question

ISO is currently underway with a new marketing push to brand itself as an NGO (non-governmental organization). This explains their sudden interest in adhering to nearly anything put out by the United Nations, whereas in prior decades ISO had little interest at all in the UN.

Claiming to be an NGO also improves ISO’s overall gravitas and international standing, making it seem more like Doctors Without Borders or Amnesty International than a book-peddling company. So this is a branding matter.

But claiming to be an NGO under Swiss law comes with some strings. One of them is that you can’t be a commercial body that primarily sells products while making the claim. But ISO is a commercial body, even if it is registered as a non-profit under the already lax Swiss regulatory system. Even considering that laxity, ISO may be pushing the limit by claiming they are an NGO, when their primary source of revenue is tied to the publication of books.

Violating its own procedures and those of the WTO — which created an entire set of rules targeting ISO specifically — would further jeopardize ISO’s “NGO” claims and possibly force the Swiss government to (finally) examine whether ISO even can legally claim to be a non-profit.

Now remember, the current Secretary General of ISO — the architect behind this latest rebranding effort — is Chile’s Sergio Mujica. Mujica was investigated for corruption and tax evasion in his home country, so it’s no wonder he brought a South American mafia approach into the ISO HQ in Geneva.

But ISO also relies heavily on frequent updates to ISO 9001, which is their number one selling product. A single revision can generate millions in revenue almost overnight, enforced by an army of ISO certification body auditors to demand companies buy the new version or lose their certification. If there are 1,000,000 companies certified to ISO 9001, and each one is forced to buy one copy, then ISO gets a guaranteed overnight income boost of $180 million, at the current cover price. (And all signs point that the next edition will be larger, and thus more expensive, likely breaking the $200 cover price barrier.)

So in secret, TC 176 is already working on a draft text which incorporates the latest changes made to “Annex SL” by the ISO Technical Management Board. TC 176 has agreed it will incorporate the new Annex SL text, thus meaning that TC 176 itself has very little more to write, since Annex SL comprises between 1/3 to 1/2 of the text.

At the same time, TC 176 has yielded to a new demand by the TMB that ISO 9001 include “climate change” driven by the recent London Declaration. This was a foregone conclusion since ISO had already been pushing climate change as a consideration for its ISO 9001 “New Concepts” committee. That committee, populated by the usual TC 176 toadies and private consultants, happily carried ISO’s water on the issue.

The design specification of the new ISO 9001 draft does include requirements that will ensure climate change is inserted into the next version, in some form or other. I’ll have another piece shortly on the problems this raises for both the standard and the ISO 9001 user community.

But to gauge support for TC 176’s move, I ran a poll on the LinkedIn ISO 9001 Group. Within less than 24 hours, we had over 1,300 votes, and the results were clear. 60% of respondents said that climate change should not be incorporated into ISO 9001, with the remaining 40% agreeing that it should.

(You can add your own votes by clicking here.)

The 60% rejection should be a clear sign to TC 176 that they are on the wrong path, and I am providing the data to TC 176 leadership to make sure they know about it. And keep in mind, the poll is still running, so the numbers may shift. But it’s likely not going to shift in ISO’s direction here.

(It’s also worth pointing out that it would take ISO months to generate any poll that could get that level of response, and Oxebridge managed to do it in a single day. So maybe TC 176 should start listening to us.)

Looking at the Responses

But looking at the response data and comments (over 100 as I write this), another pattern emerges: the support for adding UN “sustainable development goals” (SDGs) to ISO 9001, including climate change, is largely coming from eastern hemisphere third world nations, and mostly from consultants in those nations. The biggest push to include climate change appears to come from India, Northern Africa and the Middle East. A few European nations (Sweden, Germany) appear keen on this, but not to any great degree.

In comparison with the western hemisphere of the Americas, where support is low. Third world nations in South America are not consistent on the issue, and don’t align with the support from those in Southern Asia.

Another — possibly troubling — trend also emerged. Those supporting the view, and who posted comments, appear to have no understanding at all of what ISO 9001 is supposed to be. They appear to think that ISO 9001 is a universal standard for management, covering all topics simultaneously, not just quality management. And so, they argue, ISO 9001 should include climate change, along with requirements for gender equality, cybersecurity, environmental management, and workplace safety. If these supporters know that ISO has other standards for these topics (like ISO 14001 or 45001), it’s not clear. 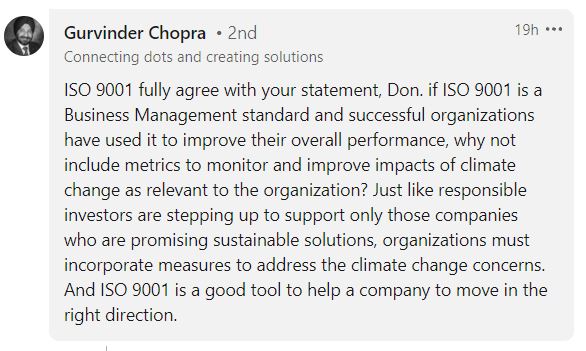 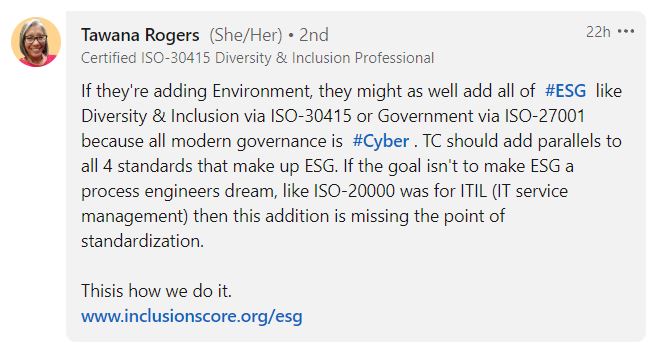 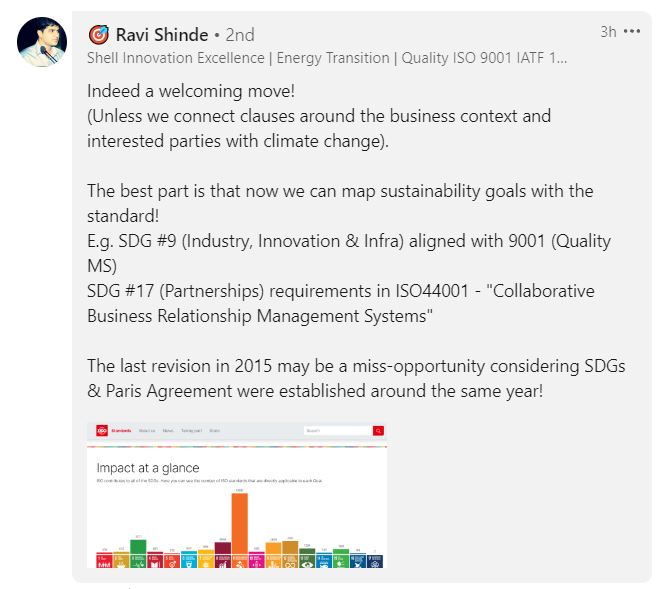 They think ISO 9001 should do everything, everywhere, all at once.

Infection by Consultants, As Usual

Now, that view is troubling because it’s exactly what the consultants at TC 176 — led by the intractable Lorri Hunt and Jose Dominguez — want. They want complete authority over everything because then, later, they can sell consulting services for everything. To date, the leadership of TC 176 (at the international level, Paul Simpson, previously, and now Sally Swingewood*, and at the US level, Alan Daniels) have been utterly unable to rein in Hunt and Dominguez, allowing them to run roughshod over ISO procedures and common courtesy. All in the pursuit of propping up their private consultancies.

ISO has rules about disallowing these conflicts of interest in its leaders, but is ignoring them since Hunt and Dominguez are slavishly obeying their orders, and pushing ahead on revising their flagship product. And remember, it was Hunt who claimed risk-based thinking would be the “biggest boon to consultants ever,” and she promptly began selling expensive seminars on the subject before the thing had even been published. One can only imagine what she thinks of being able to brand herself a “climate change expert” overnight, and take over other themes like gender equality and cybersecurity.

ISO 9001 is a quality management system standard, and its scope has always been related to the theme of ensuring that products and services meet requirements. By adding climate change, ISO risks cannibalizing its own products (ISO 14001 and 14091, as a start), while alienating its customers entirely. It will also drive ISO 9001 grossly off-topic, make it more confusing to understand, and far more expensive to implement. This will dilute the goal of improving the quality of products and services, making quality worse… not better. Finally, this risks putting ISO 9001 in the role of an international regulatory body, something ISO promised the WTO it would never do.

Again, if you want to participate in the poll or merely look at the running results, click here. It will run for two weeks.

And if you’re unpleased with this direction, feel free to write to Lorri Hunt and Jose Dominguez directly.

* UPDATE 5 January 2023: I am told that Swingewood has taken a full-time position at ISO, and has to step down from the TC 176 role. Right now that position appears empty.