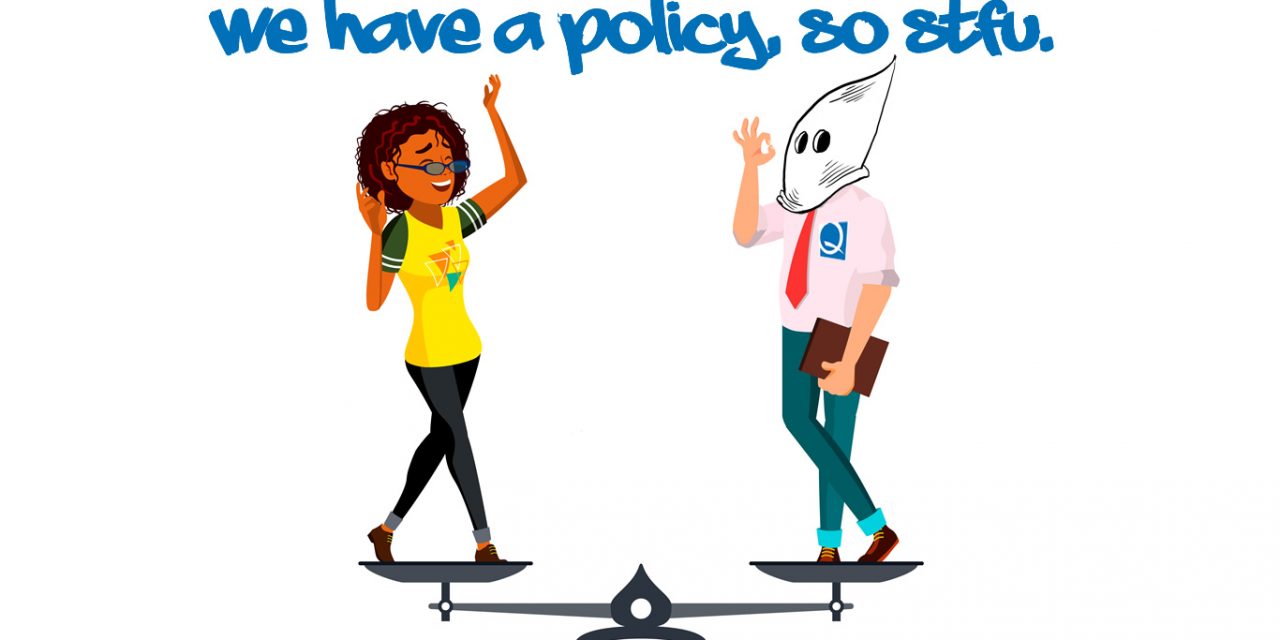 If you weren’t an ASQ member, you would have missed it, but back in 2019 ASQ issued an “Anti-Harassment and Anti-Discrimination” policy aimed — allegedly — to curb the worst behavior of its worst members. But in the same way that ASQ published a Code of Ethics to prohibit “prejudice and discrimination,” and then refused to process formal complaints of members violating that Code, the ASQ leadership appears happy to ignore this procedure, too.

You may recall that a while back, we reported on multiple ASQ Fellows, Senior Members and even Section leaders engaging in questionable behavior. This included making overtly racist statements, posting sexist comments and then engaging in wanton harassment when they were called out on it. This harassment came from the highest levels, too. ASQ Secretary Jennifer Admussen — who still works there, by the way — openly attempted to ban my appearances at any ASQ event on the planet after I reported the violations of the Code of Ethics. ASQ Fellows and Senior members joined in with that attempt, which apparently worked, since I can’t attend ASQ events anymore.

When I called out ASQ on its racism and demanded they publish a clear statement denouncing white supremacists, former ASQ CEO William Troy instead issued a statement welcoming people of any political stripe, a not-so-secretive dog whistle that emboldened the racists in its midst. Then, rather than investigate a formal ethics complaint, the head of ASQ’s Ethics Committee — Scott Laman — berated me for using an editorial graphic in my reporting of their inaction. He then claimed that I had no right to complain anyway, since I wasn’t an ASQ member.

Mr. Paris, we are aware that you recently inserted the image of a White Supremacist Klansman on ASQ’s QP cover and published it on social media.  It is questionable why you now seek to make use of ASQ’s ethics review system, particularly as a non-member of ASQ.  In the event you choose to proceed with your ethics complaint, please forward to me the factual evidence to support your allegations.  To the extent possible, ethics investigations and determinations are confidential to ASQ. 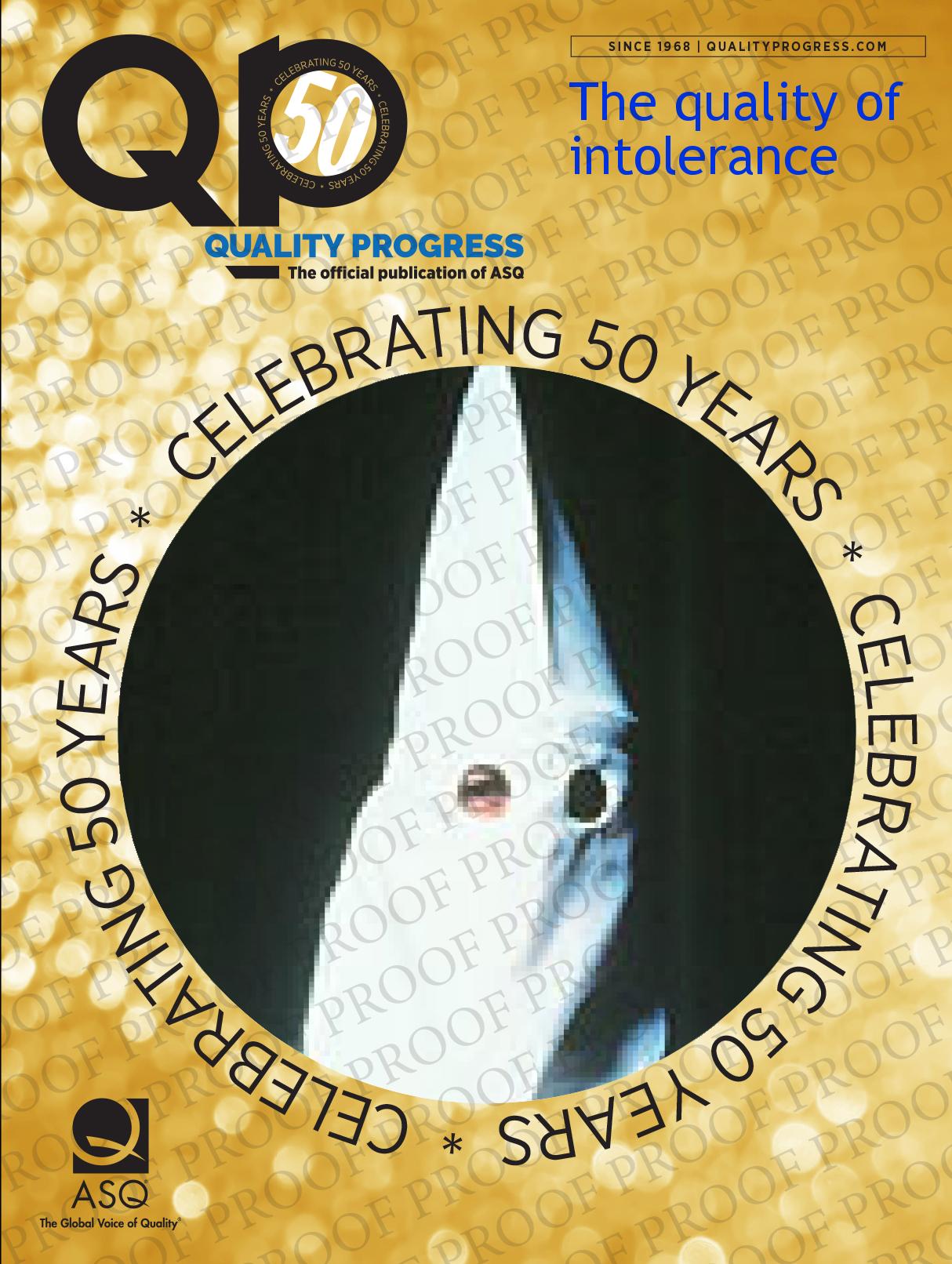 ASQ’s Ethics Chief was more pissed about this editorial graphic than actual racism, which seems sort of, umm… racist.

I forwarded him the evidence, at which point Laman and then-Board chair Eric Hayler ignored it, and closed the complaint without action. I was then immediately subject to a flood of harassment and false claims online, including false accusations of crimes, by a number of ASQ members. Some of that was settled in court, under private settlement terms. Other stuff continues to go on now.

As you know, ASQ colluded with Daryl Guberman in his harassment campaign, and now he has to pay me $1.6 million in damages. And yet, ASQ still hasn’t punished any of the staffers and leaders involved.

So it’s new Anti-Discrimination Policy — which you can read here, since otherwise they hide it behind a member firewall — is not likely to get any traction either. My complaints against their people still stand, and ASQ continues to ignore them. Senior members continue to post inflammatory material and openly racist rantings, and ASQ is silent. They still haven’t issued a statement denouncing racism in even the most generic terms. (No, I’m not counting this firewall-hidden policy. They need to be full-throated about it.)

Worse, ASQ is relying on the dubious service called Red Flag Reporting. This is a third-party clearinghouse of complaints that companies use to ensure the complaints are contained by a company they then pay. Red Flag Reporting is under no obligation to forward complaints it receives to law enforcement, for example, nor to do anything its client — in this case, ASQ — doesn’t want it to. The company openly markets itself to groups like ASQ by claiming its “ethics and fraud hotlines can help prevent automatic governmental fines and discredit malicious lawsuits.”

Hell, Red Flag gets gripes posted online by its own employees, for shit’s sake. If it can’t keep its own house in order…

Oh, and the official AS Qpolicy directs you to notify their Legal Counsel of any misbehavior, failing to remind you that their Legal Counsel is Ann Jordan, who took over for William Troy as ASQ CEO. So, of course the CEO will give such complaints a fair shake… right?

But meanwhile, ASQ is retweeting articles by other people against workplace bias, and searching around for one or two Black members it can praise for Black History Month, rather than actually using its role in the industry for something a bit more useful.

So ASQ is just putting together some showpieces to avoid litigation as if that would work. Their annual payments to Red Flag and their “yeah, we’re racists, but we’re woke racists,” posts are not likely to save them should a full-on discrimination lawsuit hit, especially given the leadership’s documented abhorrence to addressing racism to date.

Oh, but when it comes to rigging elections, the ASQ leadership and Board suddenly get very animated, and start invoking their Ethics Code like mad.

Meanwhile, as the US burns because the idea that “Black Lives Matter” is apparently something that needs to be debated with tanks and teargas, this clock is still ticking: 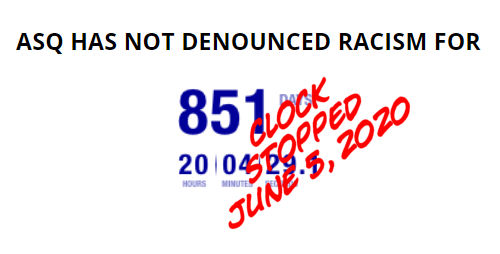 UPDATE: 851 days after Oxebridge’s request, on June 5, 2020, ASQ finally issued a full-throated denunciation of racism. You can read that here.