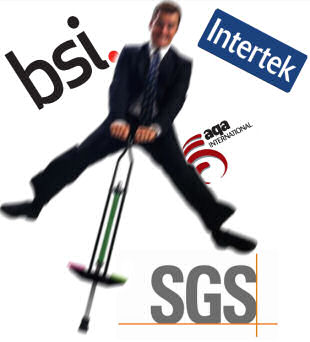 Like bad Tex Mex made by ADHD-addled trampoline Olympiads, you can’t keep an old CB rep down, it seems. Not once. Not twice. Not even three times.

Die hard Oxebridge fans (yeah, they exist) will remember the name because one of the earliest complaints raised against a CB was against BSI in 2005, prompted by a letter signed by Mathis, who was then their Senior VP of Marketing and Sales. The letter was sent to BSI certification clients and appeared to link certification and training, prompting Oxebridge to ask questions.  Upon further digging, we discovered some troubling letters from BSI clients which seemed to suggest they had received help from BSI in implementing their systems prior to BSI certifying them. In light of what has gone on since with BSI and its Entropy® package, the 2005 complaint (you can still see it here) seems downright quaint, if not a bit prescient.

(The accreditation bodies InMetro and SCC just outright refused to process the complaint, and ANAB of course did their usual weak-kneed wobble that clearly resulted in a worsening of the situation, rather than a correction of it.)

So furious was Mathis that his letter was included in the complaint, and that it was also posted on our site, he opted to pick up the phone. That never ends well.

Here is what I wrote back in 2005, as a follow up to the complaint, describing what transpired:

Earlier this morning I received a phone call from BSI’s VP Sales & Marketing Ron Mathis in which he announced that multiple lawsuits would be filed against myself and Oxebridge as a result of our recent formal complaint against BSI’s ISO 9001 registration services and our subsequent reporting on that complaint, specifically because Mr. Mathis feels the issue “impugns him personally.”  Mr. Mathis said he had “considerable resources” and would apply those to “ruin” myself and Oxebridge. Because over the course of the call Mr. Mathis identified himself three times as “an employee of BSI” and because the call came from BSI’s main phone number in Reston VA (703-437-9000), I can only assume the threat was made on behalf of BSI, and that the “resources” to which he was referring are those of BSI. While it troubles me that BSI would respond to a reasoned complaint from an industry stakeholder in this fashion, it behooves me to look at this from Mr. Mathis’ point of view and give his concerns a fair assessment. But there was more, which I left out of that letter. I am not going to go into details, because no doubt Mathis’ finger is hovering over his big, red bat-phone right now, but suffice it to say that it had to be dealt with using an entirely different means: a phone call to BSI’s compliance officer in the UK. A short while later, Mathis was no longer working for BSI.

After that, Mathis’ resume begins to take on the appearance of one of those animated dotted lines used in movies to show how an airplane crosses the country. He did less than a year and a half with registrar AQA, then dropped out of the ISO sphere entirely. A two year stint at Amelia Partners, followed by less than a year at Marketing Media Enterprizes (sic), then just under two years with Wound Care Innovations, and a year with World Trade Center International (yeah, that was well-managed.) That’s five jobs in about nine years. (I’m not counting his tenure at Intertek, which preceded BSI.) Ready to jump back into an industry that really doesn’t care what the hell your resume looks like, so long as you can fog a mirror, Mathis is now the VP of Healthcare for SGS, because presumably at SGS, you are hired on the volume of your experience, not the quality of it.

Dictionary publishers the world over are frustrated right now, knowing they now have to reprint the entry for “irony” so that it includes the SGS logo. SGS, you might remember, is the home of another dabbler of angry phone calls, Accreditation Manager Zachary Pivarnik. In 2010 Pivarnik left a sarcastic, sneering voice mail message for Oxebridge after receipt of an official complaint against SGS, which he characterized as “an inquisition.”

Birds of a feather and all that.

The beauty of this story is that as we enter the final stage of the “long game” to fix the ISO certification scheme, we see that Ron Mathis was instrumental in starting it. His was the first — but by far not the last — threat I received after filing an official complaint alleging CB. Now, after 15 lawsuit threats, numerous blacklists, bans, harassing calls, insults, denials and AB failures to control the whole mess, we have a decade of evidence proving the system is utterly broken, and that the inmates are running the asylum.

What these doofi refuse to realize is that by continuing to remain insulated, free of new blood, and dependent on the same personalities, they are just hastening their own demise. So long as the Pivarniks and Mathises and Ives and Carusos and Viannas and Marchants and Smitherses are repping the certification bodies, the world will continue to view CBs as lowlife pariahs, and ISO 9001 as a complete scam. The cert mills will continue to encroach on their territory, because the market sees little difference between the two.  The industry needs people who live by the rules and the spirit of the ISO standards, not by the cynical ka-ching ka-ching of their payday.