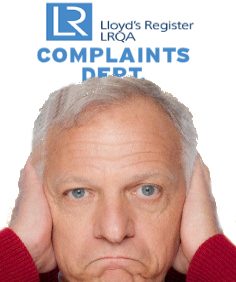 Lloyds Register (LRQA) has instituted what appears to be a ban on incoming mail sent by Oxebridge, in an apparent attempt to cut off communication regarding an official complaint. The discovery was made after Oxebridge VP Operations Christopher Paris sent Denis Ives and Bjoern Mueller of LRQA a courtesy copy of a complaint filed with UKAS. The courtesy email was bounced by the LRQA server with the message that the Oxebridge address has been “blacklisted.” Upon the discovery of the email blacklist, the complaint was amended with the new information, and another allegation placed against LRQA. The amended complaint now alleges that LRQA is willfully neglecting its duty under ISO 17021 to process complaints submitted to it by industry stakeholders. The full complaint may be downloaded here. (PDF file – 400 kb)

“This will be a serious stress test of the ability and willingness of UKAS and the accreditation bodies to exercise their role in policing large certification bodies like LRQA,” Mr. Paris said. “If LRQA is not sanctioned, this will send a message that the CB’s are accountable to no one, and that ISO 17021 has no teeth.”