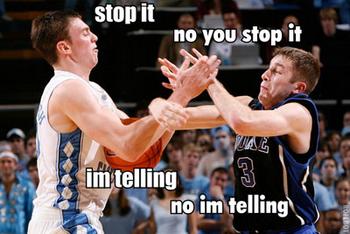 Catch these LinkedIn discussions quick, before they get shut down since they are likely to turn into a flame war soon enough.

In the first (here), Dan Nelson argues that risk-based thinking is as easy as driving a car, which is a step up from his last work which said it was as easy as playing pool. (May require joining the ASQ discussion forum.)

In the next one (here), trainer-to-the-registrars Dan Brown claims the opposite, that risk-based thinking requires full blown risk management, with assessments and mitigation plans and all that. Watch how Brown just gives a big middle finger to TC 176 by saying his view trumps theirs!

Both are passionate and utterly convinced they are right, even though they completely contradict each other. Imagine the fun if a client of Nelson’s consulting business was then audited by someone trained by Brown. The resulting nonconformities would not be paid for by either Nelson or Brown, but by the poor client who’d be stuck in the middle.

This is a great way to watch the two camps form: the first is the “RBT is easy” camp which includes TC 176. This camp insists that RBT is as easy as crossing the street, and it’s something we do every day. To make that argument, they have to ignore the fact that people are audited and certified for crossing streets.

What a train wreck!