As I reported last week, I filed an official “Request for Interpration” (RFI) to get a clarification on clause 8.4 of ISO 9001:2015. That quickly got stonewalled by ASQ, which administers these matters on behalf of the US’ national committee for ISO TC 176, called the US Technical Advisory Group, or “TAG”.

Processing the RFI for ASQ is Jennifer Admussen, the bureaucrat who previously banned me from appearing at any ASQ events, because that’s the sort of thing that passes for a day of work at the ASQ headquarters. Rather than recuse herself from my RFI entirely, she’s instead hosing up the simple RFI process, apparently out of spite.

Last week I mentioned that Admussen rejected my RFI outright, claiming it had violated some internal TAG rule that RFIs cannot be used to settle disputes between CBs and consultants. The original RFI never mentioned any CBs at all, so Admussen just made that up.

But look at her email, because I don’t want to be accused of misquoting:

I received your request for interpretation and am attaching the US RFI Guidelines and Form.  Please note that your request does not fall within the criteria of the RFI process, specifically clause 4.8, and is not accepted.

So, the RFI was rejected in its entirety, with no possible recourse.

Well, having up to three times the number of followers than ASQ has actual members should come with some benefits, so I called on Oxebridge readers to submit the RFI themselves. Admussen may be able to block RFIs coming from me, but she can’t block the planet.

A lot of readers came through, too. (Thanks, everyone!) Even worse for the US TAG, readers around the world started sending the RFI into their national ISO member bodies, circumventing the US entirely. The world didn’t need a reminder of just what a joke the US ISO member body is, but it just got one anyway.

Which led Admussen to change her tune entirely, apparently hoping no one remembered what she had just written a week earlier. She sent me this second email, with an entirely new argument:

Attached is the US form and instructions with the information you provided entered on the last page.  The form you used is the international form.  RFIs are first submitted to the ISO Member Body for a response and if that country cannot come to an agreement it is then submitted internationally (as described here: https://committee.iso.org/home/tc176sc2).

Please look over the last page to make sure the information matches your original information.  The only intentional change I made was to remove the note in the background section as the actions for AS9100 are irrelevant to our actions.  Once we are in agreement with the wording on the form,  I will work with the US Interpretations Chair to provide a response.

Now, Admussen says, she was willing to submit the RFI but made her own editorial changes.

I refused, again, advising Admussen that I didn’t really need her blessing or editing, since Oxebridge readers were already on the case around the world and we’d just go around her and the entire United States.

So Admussen took a third swing at the ball. This time, Admussen said, the problem was the form that was used, and that she would be notifying everyone who submitted the RFI they, too, were using the wrong form:

Thanks for your e-mail.  No action will be taken on your request until I receive confirmation regarding the US form I forwarded (attached again).

You mentioned the identical requests submitted, but they were also on the international form so I will e-mail them the correct form.  I can start the process to respond once I receive the US form.

And, once again, Admussen is lying.

The official TC 176 page — the very same one she linked to in her second email — clearly instructs users to fill out the international form, and even provides a link to that form. That’s the form I submitted. Here’s the screenshot from the website:

(Don’t get confused about the sentence that says, “this is not a service that is available to individual users of the standard.” What they mean is that you cannot submit an RFI directly to ISO, you have to submit it to your national ISO member. That’s true for any communication to ISO, it always has to go through a member.)

Anyway, that page then links to an instructions document for processing RFIs, which is o be followed by national members like the TAG 176 and ASQ. That document says the following:

Requests should be prepared using the “Request for an Interpretation” form which is available on the ISO/TC 176/SC 2 web site at the URL given earlier.

Any requester may download the form, complete the relevant section and send it to their [member body]. 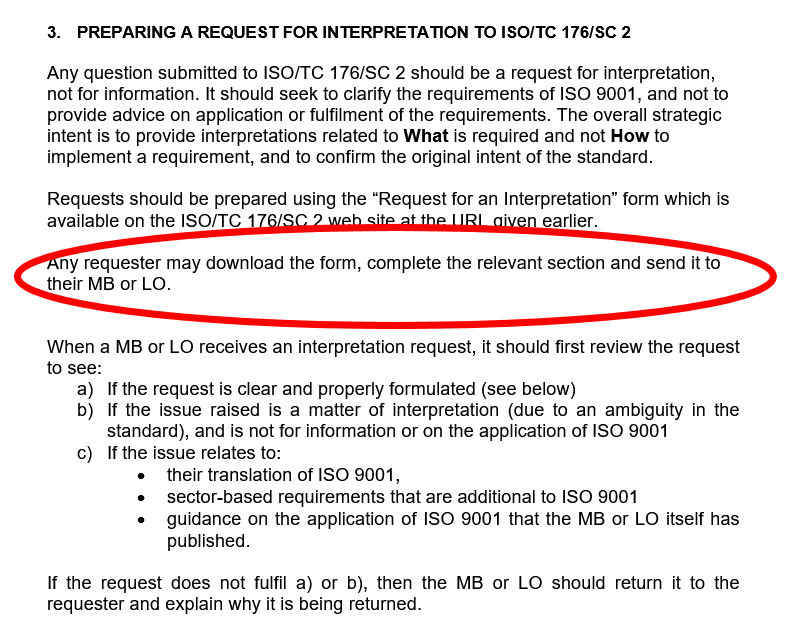 Source: Official ISO document, “GUIDANCE FOR HANDLING REQUESTS FOR INTERPRETATION OF THE REQUIREMENTS OF ISO 9001 “

So the US TAG may have created some internal procedure demanding people fill out another form, but that doesn’t mean they can ignore one that has been submitted to them using the official form provided on the TC 176 website, in full compliance with the official TC 176 procedure.

Obviously — obviously! — Admussen is being a pedantic shit. She could easily copy and paste my text onto the other form and submit it. The forms don’t require any formal signature or notarization, and — hell — they could even be submitted anonymously. We’re not applying for a mortgage, here. Admussen is only latching onto this latest argument to try to save face since her initial attempt to reject the RFI entirely met with some widespread condemnation.

Afterward, I got a lecture from Alan Daniels, the Chair of TC 176 and head of the AS9100 authoring group, that while people agree that I’m right a lot, I could work on my “delivery.” It’s the same tired argument that former ANAB head Randy Dougherty made, as well as former ASQ CEO William Troy, TC 176 darling Nigel Croft, and a slew of other “auithority figures.”

But Daniels missed the part where I did adhere to procedure and civility, and submitted the RFI on the proper form, with a polite cover letter. I only turned into an asshole after Admussen rejected the RFI based on a complete fabrication.

They all missed the part where I tried — for fifteen years — to play by the rules, attend meetings, pay my ASQ dues, go to US TAG meetings, and obey all their ridiculous procedures. In return, I was harassed, threatened, banned, insulted, and ignored entirely.

So quit their gam. Instead. I created my own chessboard and put them all of them on it. It’s been stunningly effective.

They can call it uncivil all they want, but when I was being civil, they were ignoring my calls to fix ISO’s problems. Corrupt goons always cite “civility” when they want to, but it’s just a trick to cover up their shenanigans. What they really mean is, “we will only listen to you if what you say doesn’t hamper our personal profiteering. Otherwise, shut up.”

This RFI will get processed, and we don’t need Jennifer Admussen’s permission. I don’t need to be civil, either. Real companies are losing real money over bogus nonconformities due to poor writing by TC 176. They own that problem, and they will fix it. If they delay, I will call them out on it. Waiting for me to ask them “pretty please?” isn’t going to stop progress.