The “RFI” was submitted by Oxebridge founder Christopher Paris after years of problems by third parties in interpreting the requirements of clause 8.4.3 on “Information for External Suppliers.” In every prior edition of ISO 9001, the clause included the words “as appropriate,” indicating the bullet list items were optional. The ISO 9001:2015 edition, however, omitted the words by accident, creating the interpretation problems.

Routinely, internal and third-party auditors are writing nonconformities if they do not see every 8.4.3 bullet point appearing on every purchase order issued to every supplier. This has resulted in massive waste, cost, and inappropriate purchasing agreements. In some cases, key suppliers have rejected POs from ISO 9001 and AS9100 certified companies because the suppliers refuse to agree to the PO “flowdowns.” This, then, has created a crisis in which some companies find they cannot order products from key suppliers, all because of auditor misinterpretations.

Originally, the issue was raised with TC 176 in 2013, during the drafting of that standard. TC 176 representatives defended the text by indicating the clause says the organization shall communicate “its” requirements, implying that the bullet list was then optional. However, without the words “as appropriate,” the clause has been routinely misinterpreted regardless.

Paris submitted the RFI through the proper channels, sending it to Alan Daniels and Lorri Hunt, the heads of the US TAG to TC 176. The RFI was submitted on TC 176’s official form, and was properly formatted. Hunt then passed this onto ASQ, citing formal procedures.

Admussen is tasked with processing the RFIs, and immediately issued a rejection. In her explanation, Admussen falsely claimed that the RFI violated a TAG 176 rule that says RFIs may not be used to settle grievances between a consultant and a certification body (CB). However, the RFI submitted by Paris made no such claims. It is not clear where Admussen got her information.

Oxebridge has rejected Admussen’s ruling and demanded it be reconsidered. 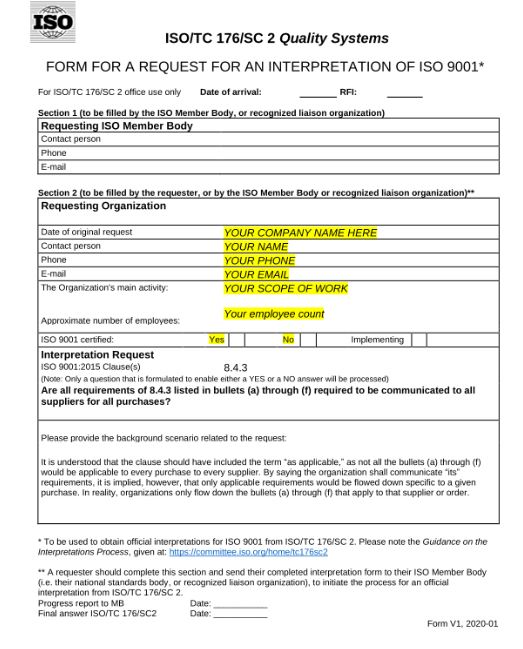 Official RFI which can be downloaded for submission by any third party.

Admussen previously issued a worldwide ban prohibiting Paris from speaking at any ASQ event or chapter, after Oxebridge reporting revealed that former US TAG Chair Paul Palmes had padded his resume. Paris was then banned from the ASQ forum board for suggesting that ASQ offer low-cost supplemental health insurance to members, an idea that was gaining steam and infuriating ASQ leadership.

Admussen should have recused herself from the RFI ruling, but did not. This creates the appearance that the RFI rejection was done out of spite, not because of legitimate technical issues.

In response, Oxebridge is asking all readers to submit the RFI under their names, either to Admussen (for readers in the US) or to their national ISO member body (for those outside of the US.)

“Admussen and ASQ may be able to block RFI’s from Oxebridge, but they cannot stop RFIs from stakeholders around the world,” Paris said.

The RFI form may be downloaded here, in editable .DOC format. Submitters need only enter their contact information and send it to the appropriate ISO member. Submissions to the US should be sent to Admussen at standards@asq.org.

The issue was raised previously by Oxebridge with the IAQG, which oversees the AS9100 standard. In that case, Alan Daniels agreed with Paris on the need to clarify, and that the clause 8.4.3 bullet points are intended to be optional. But the IAQG’s eventual official “clarification” confused the matter, saying that clients could claim an exception to the bullets from the entire scope of their QMS, not for individual purchases.

After submitting the new RFI, Daniels — on behalf of IAQG and not TC 176 — agreed to take new action, and is planning an immediate clarification. This will clarify that the bullets in 8.4.3 are optional, and to be applied to specific purchases, not all.

Alan Daniels is also the head of the UIS TAG to TC 176, so Oxebridge has asked him to file the RFI personally, to override Admussen’s rejection. He is not expected to do so.