ISO Standard on Policing to be Written by Police States, Sponsors of State Terrorism

A new standard for the application of ISO 9001 in “policing organizations” will be drafted by oppressive, totalitarian regimes, according to a new official memo released by ISO Technical Committee 176.

The revelation, published in official ISO document N1391, shows that an overwhelming number of ISO member nations declined to participate in the project, refusing to provide national experts. Of a total of 84 member nations who voted, only 16 agreed to provide subject matter experts. This was not a vote on approval of the work project, which has already been approved, but instead only a vote as to whether to send experts to participate; nevertheless, the lopsided results show the idea of creating a “policing” standard is not universally accepted.

Of the nations that submitted experts — and, as a result, those who will now draft the resulting standard — many are from totalitarian regimes and known police states. These include China, Russia, Iran, Nigeria, and Congo. Other participant countries with oppressive police operations, such as Thailand and Trinidad & Tobago, are considered to either be police states or on the verge of becoming them. 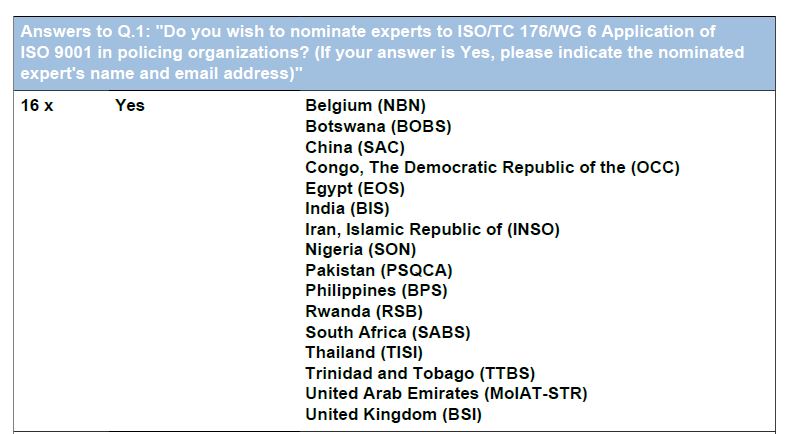 In the case of Thailand, the nominated expert is the Police Major General, who heads the Royal Thai Police. That organization has been accused by human rights observers of torture and kidnapping. In Congo, the government has used oppressive police tactics under the guise of cracking down on fraud; in reality, the state police often overlook, or embolden, domestic terrorists and kidnappers.

The majority of democratic nations refused to participate in the project, with one major exception being the United Kingdom, which is represented by the certification body BSI.

It is not clear why TC 176 felt a need for a special standard on the application of ISO 9001 for policing at all. Previously, TC 176 had mandates to minimize the proliferation of quality management system standards. In recent years, TC 176 has changed its business plan to endorse alternate standards, causing chaos and confusion in the marketplace, and helping to cannibalize the ISO 9001 brand.

The initiative was launched by Cristian Taboada of the Organization of American States (OAS), yet — ironically — not a single OAS nation has agreed to participate in the project. Taboada chairs “TC 176 Working Group 6” which is managing the project.

It appears clear that totalitarian regimes again appear poised to use ISO as a means of legitimizing their anti-democratic governments, as they have done in their push to support ISO 54001 on electoral management systems. Nations like China and Russia aim to use the ISO standards in order to deflect criticism from their antidemocratic structures and lack of free elections.

ISO has repeatedly refused to denounce terrorist nations in its membership, or human rights abuses by its members. Instead, ISO tries to present itself as an international non-governmental organization (NGO), similar to the United Nations, and defends its inaction on a need to remain “impartial.” In reality, ISO is a publishing company and its decisions are made related to revenue targets of its books, known as “standards.”