The International Organization for Standardization (ISO) is pushing ahead on a plan to revise ISO 9001 despite an overwhelming call to “confirm” the standard, falsely claiming that ISO member feedback was somehow tainted.

In an official TC 176 document, numbered N1587, the TC 176 Secretary, Charles Corrie of BSI, claimed without evidence that results of an official poll of ISO member nations included “submissions [which] appear to be the personal opinions of individuals, rather than formal responses from national standards bodies.” On that basis, Corrie announced that the results were not passed onto the ISO “SPOTG” committee which had been tasked with revising the standard.

In December 2020, ISO circulated an official vote among member nations on whether ISO 9001 should be revised or confirmed. The results showed a majority voting to confirm the standard, as-is. Unhappy with the results, ISO headquarters in Geneva directed TC 176 to circulate a second petition, demanding that members justify their “no” votes, and be given a chance to change them. This second “vote survey” also resulted in a majority of nations holding fast, and refusing to support revising ISO 9001. The Corrie Memo effectively throws out those results, under the specious argument that the comments received were somehow tainted by unnamed individuals. 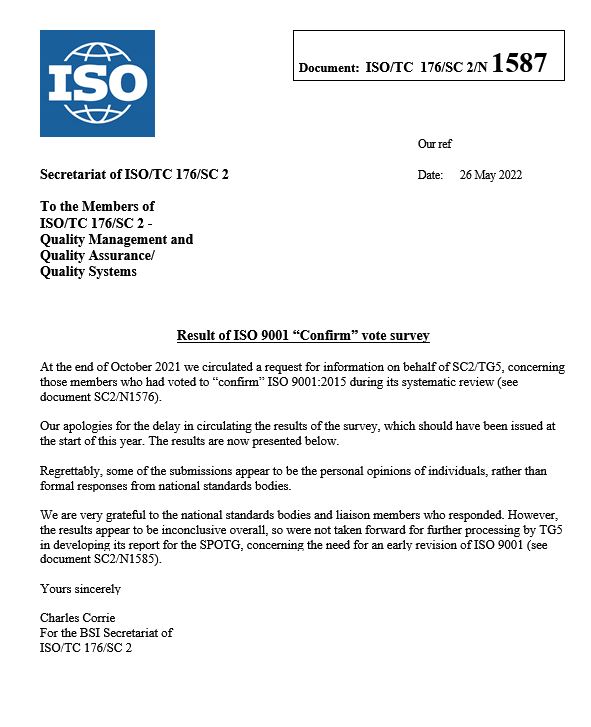 The full Corrie memo, with ISO member comments, can be downloaded here.

Corrie and BSI have led the TC 176 committee for decades, and Despite ISO rules claiming the Secretariat shall not influence TC results, Corrie and BSI have routinely steered ISO 9001 development to benefit themselves. Corrie has boasted internally within ISO that he enjoys the “globetrotting” trips he gets to take as part of his TC 176 duties. Corrie works to hold such events in beach resort locations or tourist trap cities.

Latest Attempt of Many

The Corrie memo is only the latest attempt by ISO to overrule the will of member nations. To date, ISO has ignored or rejected five votes and polls of members and stakeholders, all of which called on ISO to “confirm” the current revision.  At each stage, ISO pushed ahead with its intent to begin an “early revision,” something not supported by official ISO procedures.

The Chair of TC 176 SC2, the subcommittee that oversees the authoring of the ISO 9001 standard, Paul Simpson, claimed on LinkedIn that ISO has the authority to do so. Simpson quoted a sentence from an official ISO procedure that allows a technical committee to trigger a revision of a standard “between” routine five-year reviews:

The timing of a systematic review is normally based either on the year of publication or, where a document has already been confirmed, on the year in which it was last confirmed. However, it is not necessary to wait for the maximum period to elapse before a document is reviewed. A committee may at any time between systematic reviews pass a resolution initiating a revision or amendment of a standard.

That rule was intended to cover situations where technological advances occur prior to a routine 5-year review, triggering the need for an update. No such conditions have been met regarding ISO 9001, however.

Despite “between” suggesting the early review be done at 2.5 years, Simpson is claiming it can be done mere hours after an international vote to reject a revision. In fact, TC 176 had already begun work on the new revision prior to tallying the results of the 2020 vote, with initial work on the revision having already begun in early 2021.

The rule does require TC 176 to pass a formal “resolution” initiating the revision, which TC 176 has not done. Simpson again defended this, saying the revision had not yet started, but the ISO rules are clear that the resolution is necessary to begin the process. Furthermore, TC 176 has already begun working on the design specification, proving the revision process is already well underway. For the 2015 version, the design specification was developed after two drafts of the revised standard were already written.

Like Corrie and others, Simpson stands to earn significant revenue as a private consultant, since he aggressively markets his services by tying them to his role as SC2 Chair. The conflict of interest is also in violation of ISO’s procedures, but ISO has elected to reward Simpson with increasing responsibilities, rather than oust him.

The Corrie memo included a list of comments from member nations, many of which pleaded with ISO not to revise ISO 9001.

Canada’s SCC wrote, “ISO 9001:2015 is a confusing mess. Further changes are unlikely to improve the standard; they appear more likely to make it more confusing and more irrelevant, so the current standard should be confirmed.”

Germany’s DIN wrote, “The stakeholders in the German mirror committee agreed that many organisations have implemented the 2015 version late at the end of the transition phase and need more time to fully understand and effectively implement the current requirements.”

Austria wrote, “Unnecessary changes to 9001:2015 have substantially devalued the product and made it too complicated to implement due to loose interpretations from typically uninformed and biased registrar auditors.”

On LinkedIn, Simpson also claimed that the COVID pandemic justified an early revision, although Simpson did not elaborate as to why. Other standards, including ISO 17025, have not been updated at all during the pandemic, and there is no call for an early revision of those standards. The most current version of that standard is from 2017.

ISO 9001, however, is ISO’s flagship product, and generates tremendous revenue when updated. In 2008, the world also rejected a call to revise the standard, so ISO issued an “amendment” standard. Companies were then forced to buy copies of “ISO 9001:2008” upon threat of losing their certification if they did not.

The reality of COVID is the opposite, however. In contradiction to Simpson’s claim, countries specifically called on ISO not to update the standard, because of COVID.  Panama’s COPANIT wrote, “COVID 19 has affected our economy and industry badly and organizations are not able to cope with change at this time.” Israel also cited COVID as a reason to reject an early revision

The telecommunications liaison organization, QuEST, wrote: “Due to the impact of the COVID 19 pandemic and questions regarding remote audits/assessment, changes to ISO 9001 will cause additional stress to overworked resources tasked with implementing and auditing the ISO 9001 requirements.”

Canada repeated this plea: “COVID 19 has affected everything, we do not have the time or resources for a big change in this area.”

Bolivia’s IBNORCA summed up the argument as follows:

COVID 19 has caused a social and economic impact in our country; many organizations, mostly small businesses keep fighting to move forward with these implications. A change in the requirements of the standard means to be prepared for upgrading and modifying the management system in the companies. As a result of this, there would have been new investments of money, materials and human resources reflected in new action plans. Nowadays, not many organizations have the economic conditions to work with new projects, and also human resources are dealing with strategies for motivating personnel.

The United States mirror committee, called the ANSI TAG to TC 176, voted to push forward on the revision. Behind the scenes, however, TAG representative Lorri Hunt had already been working on an in-depth analysis of the clauses of ISO 9001:2015 to determine impacts of changes, and possible revised text, prior to the “vote survey” of October of 2021. Helping Hunt on that effort was another private consultant, Lisa Uhrig. The results of that work were completed in January of 2022, now four months before the release of Corrie’s memo. A detailed spreadsheet, with their names included and the content of the proposed changes, can be downloaded here.

The US Chair, Alan Daniels, has been largely silent on the matter, with Hunt running the committee as de facto chair.

Japan also voted for early revision, citing environmental impacts but without explaining why. In its justification for the early revision, Japan wrote, “In order to achieve carbon neutrality as a response C27 as well as a need to address ESG in general.” The early revision would cause user organizations to use more energy, not less, making Japan’s position logically backward.

In general, ISO and TC 176 have refused to consider the impact on businesses, which will be forced not only to buy copies of the new ISO standard, but then burn up costs implementing the changes. Sources within ISO report to Oxebridge that the decision to update ISO 9001 had already been made by the ISO Executive, with TC 176 informed that the revision was “a go” no matter what its member nations voted. That decision was prompted by ISO’s need to generate sales revenue, and not anything related to the will of official ISO member nations.