In 2017, RWE was ranked as Europe’s biggest CO2 emitter and as the worst positioned of the 14 largest European power companies for low-carbon transition. The company has since reduced its overall power plant emissions from 131.8 million tonnes of CO2 in 2017 to 68.9 million tonnes in 2020, largely by reducing coal power operations and, for 2020, in light of reduced demand under COVID-19.

However, it continues to mine and burn brown coal, an energy source which is disastrous for the climate, and refuses to phase out coal power by the time experts say is necessary for climate goals – 2030. RWE also plans to ramp up on its fossil gas business, despite the clear need to reduce reliance on gas. 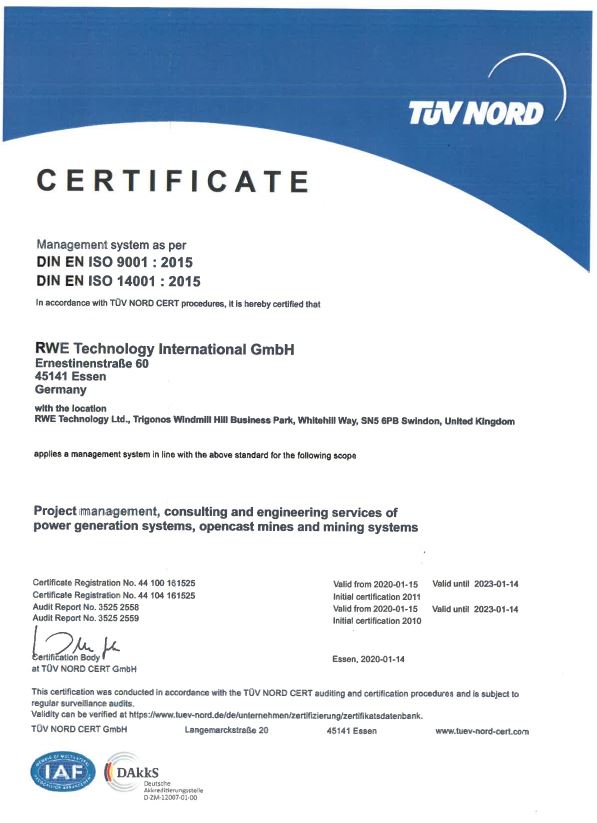 RWE has engaged in an aggressive “Greenwashing” rebranding campaign, that ClientEarth says hides the truth of its operations:

In Peru, RWE’s CO2 emission is being tested in court as the reason for a looming humanitarian crisis. An increase in greenhouse gases has caused glaciers to melt, raising the waters of Lake Palcacocha. The lake now appears ready to burst local dams, threatening the city of Huaraz in the valley below. German judges are visiting Peru to assess the veracity of these claims.

Despite this, RWE holds multiple ISO 14001 certificates issued by TUV NORD. Those certificates attest that RWE has implemented environmental management system controls. The certificate lists multiple RWE plants around the world as part of the scope of its certification.

TUV NORD’s website claims that “certification according to the internationally recognised Standard ISO 14001 offers independent confirmation of a responsible approach to the environment.”

The certificate is accredited by the German accreditation body DAkkS, a member of the International Accreditation Forum (IAF).

TUV NORD is currently under investigation for allowing its Saudi operations to be run by a consulting firm, in violation of IAF rules and world accreditation standards. DAkkS ignored evidence and defended TUV in that case, and the IAF has taken no action on any of the claims against the certification body.