As usual, the world’s certification and accreditation bodies are at it again, skewing the rules to suit themselves while the users of their services get screwed. This time, the ISO committee that oversees the CB standard ISO 17021 has decided that it will renew the standard for another five years without issuing a revision.

According to UKAS’ Technical Director and VP of Satanic Rituals, Rob Bettinson, “confirmation that there will not be a revision for at least 5 years enables certification bodies to concentrate on continued delivery of existing services which is challenge enough during these difficult times.”

ISO 17021 is written by the ISO Conformity Assessment Committee, or CASCO. Who’s on CASCO? These assholes. And yes, of course that list includes BSI, the British Standards Institution.

And let’s face it, UKAS and BSI are basically joined at the third nipple. Technically, UKAS — which accredits BSI for some scopes of its work — should be objective and keep its mouth shut, but of course it doesn’t. Here they are openly promoting BSI, the very organization they are supposed to be overseeing through a robust system of “objective” audits free from “conflicts of interest.” Making it worse, UKAS is supposed to be ensuring that BSI doesn’t engage in consulting, but their latest post actually praises BSI for opening a consultancy!

Meanwhile, UKAS and BSI are happy to keep pushing for a revision of ISO 9001, without any regard for their customers’ need to “concentrate on continued delivery of existing services which is challenge enough during these difficult times.”  Yes, in about 2024, you’re going to have to buy a new copy of ISO 9001, spend thousands of dollars implementing the changes, and then undergo expensive “upgrade audits” knowing that UKAS and BSI made sure they were never going to have to face that same problem.

So, yeah, basically fuck you.

At the same time, UKAS and its CEO Matt “Valdemort’s Nephew” Gantley are so blindingly arrogant, they are literally posting photos of their office workers not engaging in social distancing, as they brag about their people practicing social distancing. UKAS really thinks you are that stupid. 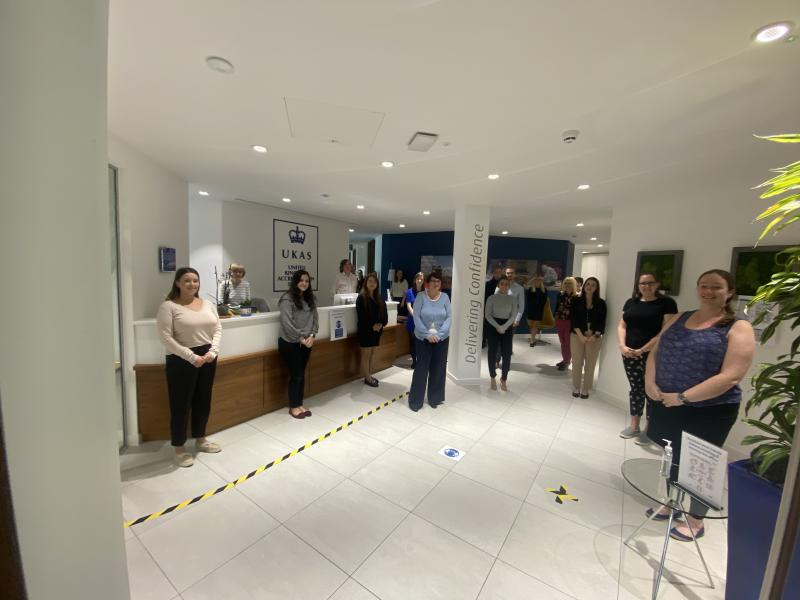 No masks, no workplace partitions, no limitations on gathering, and no adherence to the UK guidelines for physical distancing. (UK says people must remain 6.5′ apart… the women in this photo are not even half that distance.)

The photo brings to mind the movie The Sixth Sense, because I swear when I look at that photo, I see dead people. UKAS is literally going to kill its employees, but that’s fine, because apparently the more souls Gantley and Bettinson send to Hell, the longer they live or something.

You’d think the UK government would have the stomach to stand up to UKAS and stop this madness, but you’d be wrong.