The IRCA auditor training program, managed by the UK’s Chartered Quality Institue (CQI) is officially permitting spammers to use its member list for sending unsolicited ads.

In one email received by Oxebridge, the Indian certification body Uniacts was found sending a spam message for its ISO certification services. The email was prefaced by boilerplate language added by IRCA, revealing it was allowing its “register” platform to be used for such purposes, and then putting the responsibility for the spam back on the recipient. IRCA tells the recipient to contact the spammer — not IRCA — if there are any problems:

The following email is sent from the IRCA register. A user of the register has chosen to contact you. IRCA is not responsible for the contents of this message. If you have received this email by mistake, please notify the sender immediately and do not disclose the contents to anyone or make copies thereof. 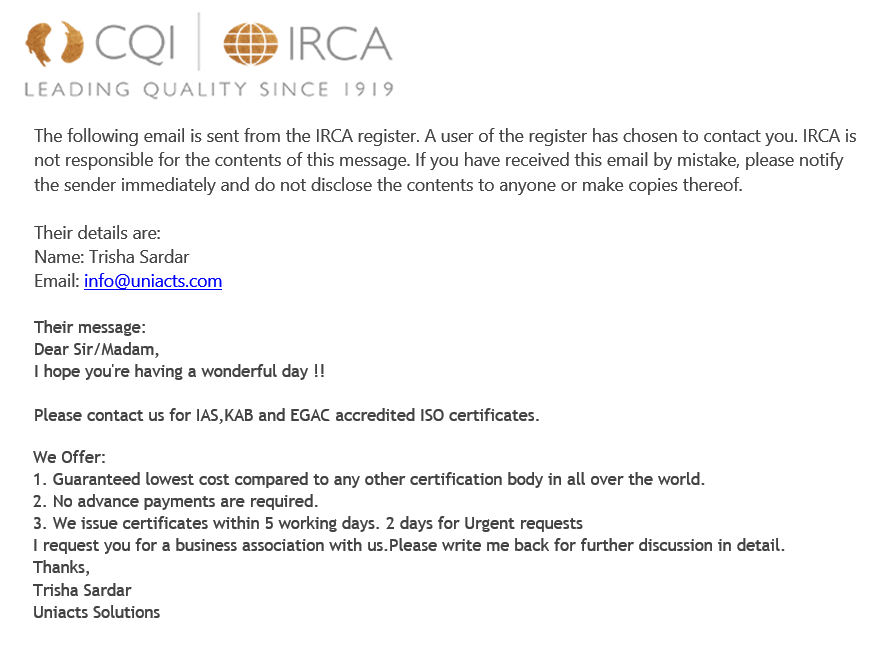 The claim of accreditation by KAB appears to be fake, however. That body has no listing for Uniacts on its official registry of accredited bodies, meaning that CQI is also allowing its IRCA register to be used for the spread of false information.

Spam is an accepted practice in South Asia and the Middle East, even as North American and European regulators attempt to control it. Unsolicited emails lead to cybersecurity risks, ransomware attacks and theft of personal information. The fact that CQI is allowing the IRCA platform to be used by spammers raises serious concerns about the organization.

Despite the boilerplate language, should a victim be harmed by one of the IRCA spam messages, IRCA would likely be held legally accountable.

It is assumed that CQI is selling access to the IRCA register to spammers, as a source of additional revenue.

CQI head Vincent Desmond has taken a stand against complaints related to his two organizations, CQI and IRCA, and blocks communication from complainants or complaints processors like Oxebridge. In the past, Desmond refused to denounce racism in his companies, and has refused to reverse a decision to “accredit” a fake college run by a CQI Fellow.

The CQI holds official recognition by the UK government, which grants it its “chartered” status.