A2LA VP Trace McInturff issued a brief dismissal of the Oxebridge complaint put to his organization regarding the spinoff of “A2LA Workplace Training.” Oxebridge has alleged multiple violations of the accreditation standard ISO 17011, largely centered around conflicts of interest created by the A2LA WPT spinoff. The official A2LA response came only days after submission of the complaint, raising concerns it was rushed without proper, independent review.

McInturff ignored the evidence provided in the Oxebridge complaint, and simply declared there was no conflict while offering no proof. He did not address multiple aspects of the complaint, and in at least one case appeared to have made a denial that contradicted the evidence. In its official Course Catalog, A2LA WPT features the photos of its “instructors,” 19 of whom are all in positions of authority within A2LA, including some in roles that would oversee disputes regarding their own personal conflicts. The “A2LA WTP Instructors” were listed in the document which, itself, is linked from the page on “custom consulting.” Despite this evidence, McInturff claimed A2LA staff are “forbidden to consult or provide any customized training that could be construed as consulting.” 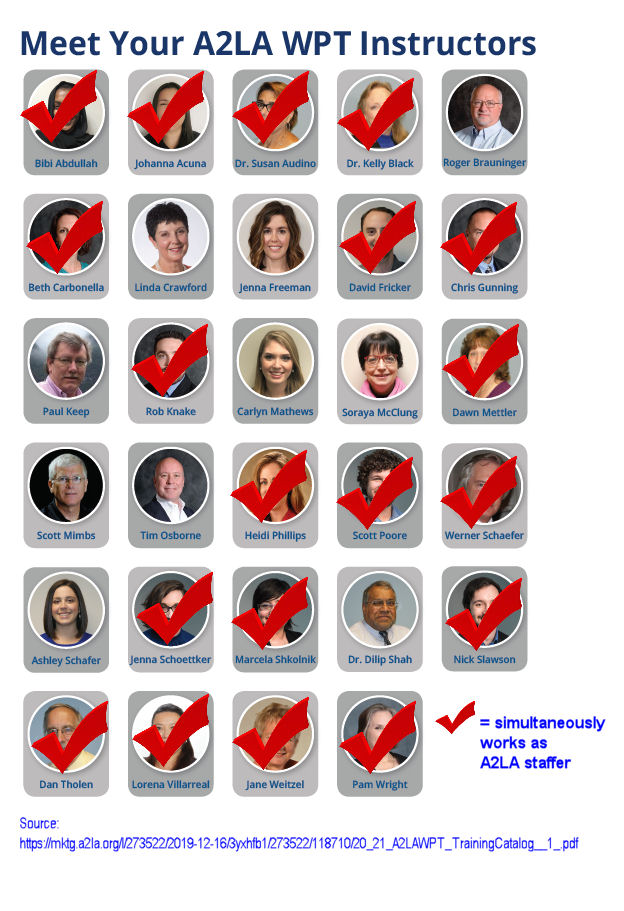 Making matters worse, A2LA’s own “testimonials” page appears to publicize the use of the same “instructors” as having provided, in at least one case, “customized” consulting. A prior version of the A2LA WPT website from April featured a testimonial from an A2LA accredited firm that indicated, openly, that it had received customized training.  Steve Doldo of Wrentham Tool in Bellingham MA wrote the following regarding A2LA training his company had received:

The ability to customize and target specific areas of training and the ability to utilize real data in the curricula along with the more personalized approach to the training really paid off in getting much more out of a training session.

The quote no longer appears on any listed A2LA page, but does appear when searching the site. In the April 2019 version, however, the quote was published directly on the A2LA WPT page for “instructor-led training” testimonials, thus connecting the WPT instructors with the provision of customized training. This appears to wholly contradict McInturff’s claim that A2La staff are “forbidden to consult or provide any customized training that could be construed as consulting.”

The Wrentham Tool website then shows it holds A2LA accreditation for ISO 17025, providing what appears to be incontrovertible evidence that A2LA accredited a laboratory that had previously received customized training from A2LA staff working as instructors for A2LA WPT.

McInturff also ignored entirely the fact that the A2LA WPT and A2LA websites cross-link to each other, and that A2LA WPT’s official pricing and other documents clearly link their activities to A2LA “accreditation.”

A2LA provides laboratory accreditation to standards such as ISO 17025, which is used by labs that provide calibration or testing services for critical industries such as drug manufacturers, aircraft manufacturers, medical devices, and more. Oxebridge argues that improper laboratory accreditation can lead to the risk of harm or injury to the public.

In his denial, McInturff nevertheless appears to have admitted to a violation of ISO 17011, but did not accept responsibility. He claimed that A2LA has been aware of the confusion created by the identical nature of the logos of A2LA and A2LA WPT, which is prohibited by ISO 17011, but then put the responsibility back on A2LA WPT.

A2LA provided ISO/IEC 17011:2017 (clause 4.4.12.c) language to WPT months ago and WPT is currently in the process of changing its logo to be ‘distinctly different’ from A2LA’s. A2LA has been informed that announcement of the new WPT logo is expected to occur within the 3rd quarter 2020.

In a related email, A2LA acknowledged it had an open corrective action on the issue, but it is not clear when that was opened, nor why it remains open.

While McInturff’s response indicates they addressed the logo issue with WPT “months ago,” the problem has existed since WPT was formed in 2018. In an official A2LA press release published in August of 2018,  A2LA’s Kelsey Roberts promoted the WPT logo which incorporated the A2LA logo within it.  This press release was issued directly by A2LA — under McInturff’s leadership — and not that of A2LA WPT.

The LinkedIn profile for Roberts also clearly links the two A2LA companies, and indicates she simultaneously works for both, thus disputing McInturff’s claim the companies are independent of each other:

The two things that excite me most about work are the creative brainstorming process and seeing a project through to successful completion. As the Marketing Manager for the United States’ largest provider of laboratory accreditation, A2LA, and a world leader in training and consulting, A2LA WPT, I do both regularly. In this role, I lead both organizations’ marketing efforts covering all channels, including marketing automation, digital strategy, tradeshows and conferences, website, social media, advertising and press relations! 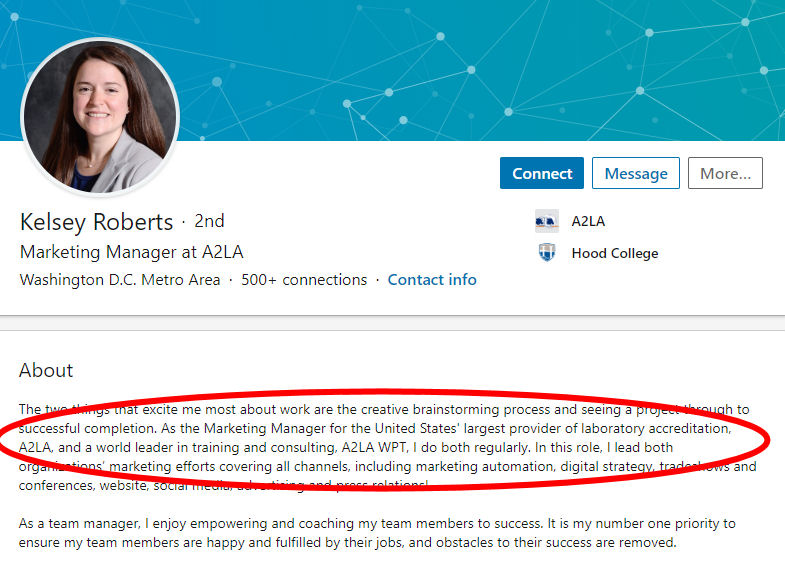 This would appear to disprove McInturff’s claim that A2LA had some sort of conflict over the similarity of the A2LA and WPT logos. The 2018 press release branding of WPT as “An A2LA Company” also appears to cast doubt on the claim made by McInturff that “first and foremost, these two corporations are totally separate, independent legal organizations.”

Any attempt to shift blame to WPT for logo misuse is nevertheless moot, since ISO 17011 demands the accreditation body — not any consulting firms — control the use of their logo and marks. This would indicate that A2LA has been in knowing violation of ISO 17011 for at least two years.

Three accreditation oversight bodies — ILAC, APAC and IAAC — have all ignored the conflict of interest since A2LA WPT was created in 2018. Osborne falsely claimed that the deal was approved by ILAC, a representative of which subsequently denied the claim. APAC and IAAC have both refused to confirm or deny that they approved it, also per Osbourne’s claims. In both cases, the organizations simply referred the matter back to A2LA, which has insisted the deal was approved.

While it could be that “a few months ago” one of the bodies raised a nonconformity with A2LA regarding the WPT logo misuse, it would not explain why this problem was not addressed in August of 2018, when the logo was first released. A2LA should have undergone multiple peer review audits by at least one of the oversight bodies during that time.

Because McInturff’s reply appears solely as a denial, and not the result of a thorough “investigation” as required by ISO 17011, Oxebridge requested that A2LA provide an improved response prior to appealing the decision. A2LA rejected this offer. The oversight bodies were all copied on the responses, and have still not acted.

The matter will now be appealed to A2LA and then escalated to an IAF regional body, most likely IAAC.

Oxebridge has warned A2LA and the various bodies that should an A2LA accredited lab be found to have been involved in a scandal or disaster that casts doubt on the legitimacy of their accreditations, they will be called out for their respective roles and held accountable.