IAQG Is Now Running Ads for BSI, the Certification Body It’s Supposed to Be Overseeing

The International Aerospace Quality Group (IAQG) ran a promotional advertisement on LinkedIn for the British Standards Institute (BSI), one of the AS9100 certification bodies that the IAQG is supposed to manage via objective, impartial oversight. 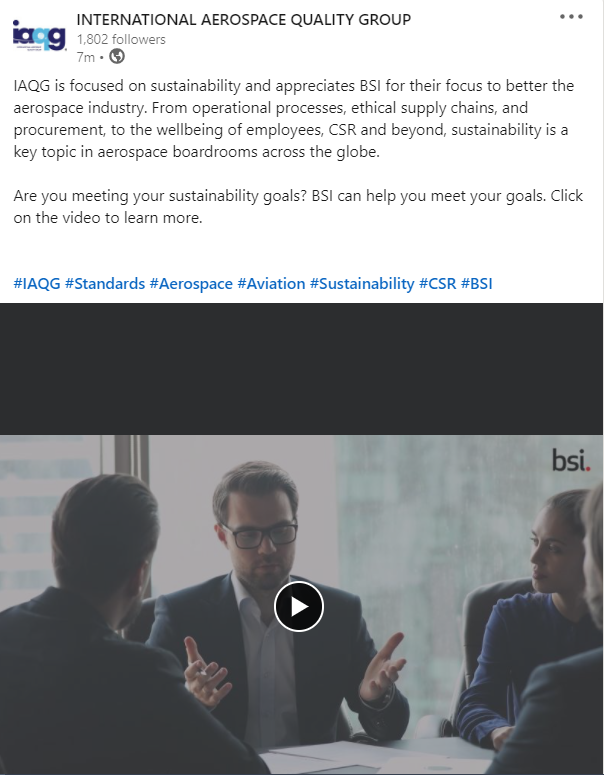 The IAQG sits in authority over BSI within the AS9100 aerospace quality management certification scheme. The IAQG is supposed to adjudicate formal complaints against BSI and other such bodies, and holds the power to strip such bodies of their AS accreditation in cases of corruption or failure to abide by accreditation standards such as AS9104.

Oxebridge filed a complaint with IAQG against BSI in May of 2020, for creating artificial AS9100 “nonconformity quotas.” Oxebridge uncovered official BSI executive emails and memos detailing how senior BSI executives established nonconformity quotas as a means of measuring BSI’s financial health, a gross violation of accreditation principles. Under ISO 17021 and AS9104, nonconformities must be issued based on objective evidence, and not the result in “financial threats to impartiality.” Despite this, IAQG has ignored the complaint, allowing it to remain unanswered for over a year.

The IAQG then was caught having adopted BSI’s “quota” approach and mandating it be applied by all AS9100 certification bodies. Oxebridge filed a complaint against this issue in March of 2021, and that also remains ignored by IAQG.

“Nonconformity quota” related complaints in IAQG OASIS remain with a status of “open,” indicating that IAQG management is ignoring the filings. Screenshot as of 24 May 2021.

That IAQG is now openly advertising for BSI hints as full-on corruption within the AS9100 scheme, and exposes the accreditation scheme to accusations of it being a “pay-to-play” racket.

BSI has long since been deemed “too big to de-accredit,” often accounting for the bulk of annual revenue for any accreditation body it utilizes. Its power then extends to IAQG, which has little financial reason to ever hold BSI accountable to the various accreditation rules it should operate under.

BSI was found to have certified the company responsible for the manufacture of defective angle-of-attack indicators that led to the Boeing 737MAX crashes. BSI certified a company that was later banned by NASA as a supply chain participant after it falsified aluminum structural data, having engaged in nearly 20 years of data falsification. BSI had certified the company both during its data falsification practices, and then even after the scandal was reported.

Outside the aerospace industry, BSI had certified the BP oil management company responsible for the Deepwater Horizon drilling rig, which exploded and caused the worst man-made environmental disaster in human history, killing 11 workers.

The risk to IAQG now is that the other 100+ certification bodies accredited in the AS9100 scheme may demand equal marketing support, or launch a class-action lawsuit. The IAQG could be seen as helping give marketing advantages to one of its accredited CBs, and then denying that same benefit to others.

The IAQG primarily operates out of the United States, but through a shadowy network of informal connections. Its physical — and, thus, legal — location is in Belgium, far out of reach of US regulators.