BSI’s Chief Operating Officer of Assurance, Carlos Pitanga, has refused to answer questions related to his signature appearing on ISO 9001 certificates issued to Hydro Extrusions, a company found to have engaged in nearly two decades of criminal fraud due to falsification of aerospace test data. Another BSI official, Reg Blake, Senior Vice President of Knowledge Transfer, claimed to be looking into the matter, but never followed up.

Hydro was ordered to pay $46 million in order to settle civil and criminal fraud charges stemming from a 19-year scam wherein the company — under its prior names SAPA Extrusions and SAPA Profiles — intentionally falsified tensile strength test data on aluminum products which later wound up in aircraft and spacecraft. NASA claims the SAPA falsifications resulted in the failure of two entire missions. NASA estimated the losses due to SAPA’s scam amounted to as much as $700 million.

Despite his role in certifying SAPA/Hydro, Patanga received a promotion from BSI in 2018; his prior role was Senior VP of System Certification and Compliance.

The US Dept of Justice summed up the scandal affecting Hydro/SAPA:

For nearly two decades, [SAPA] and its employees covered up substandard manufacturing processes by brazenly falsifying test results, then provided the false test results to hundreds of customers across the country, all to increase corporate profits and obtain production-based bonuses.

Despite this, registrar BSI continued to certify SAPA under ISO 9001, attesting to the quality system in place both at the time of the scandal and after its widespread reporting. SAPA rebranded itself as “Hydro” partially to get out from under the shadow of the fraud case, and BSI then issued an ISO 9001 certificate to the new Hydro organization. That certificate includes the Portland OR facility at the heart of the data falsification scheme. 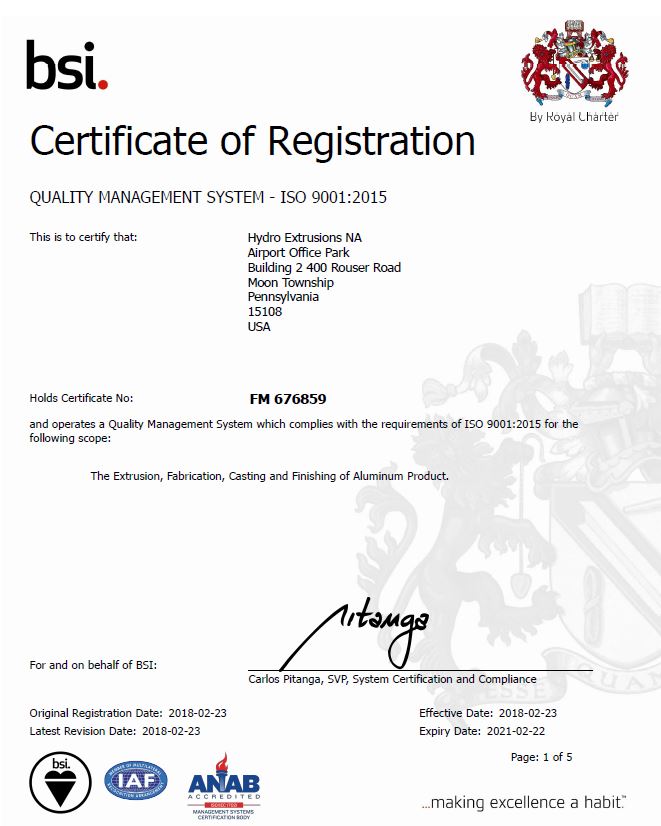 The ISO 9001 certificate is signed by Pitanga, who has not responded to questions regarding his role in the decision, nor the fact that BSI is certifying the quality system which was reported throughout the industry as being the source of a massive criminal conspiracy.

BSI’s Blake promised to look into the matter and report back to Oxebridge, but never did so.

NASA blacklisted SAPA and is attempting to do the same for Hydro. With the ISO 9001 certificate in place, however, Hydro may still win the right to bid on other industry contracts, for customers who may not be aware that Hydro is, in fact, SAPA.

The BSI certificate was accredited by ANAB, which has also failed to take any action against BSI or Hydro. The certificate includes the logo of the IAF.