An inspection firm used to verify home electrical wiring installations in the wake of the deadly Grenfell Tower fire disaster was labeled “incompetent” by a recent report, even as it holds UKAS accreditation.

Certsure LLP operates the NICEIC certification scheme, providing electrical inspections of homes and apartments against the BS 7671 standard. According to the company website:

Contractors registered by NICEIC are assessed on a regular basis to ensure that they are competent and capable of meeting the relevant technical and safety standards, codes of practice and rules of the Schemes they are registered to.

Put simply, our Platinum Promise is a guarantee. If an NICEIC & ELECSA registered contractor carries out work that falls within their scope of certification but turns out to be non-compliant – and they then stop trading – then we will step in.

But an independent report published by Engineering & Technology disputes this claim, saying, “in practice, E&T has learned this does not always happen.“

He says there are “loads of really dodgy, dishonest, corrupt companies that send anyone out to do inspections. A lot of these companies are management only; they don’t actually employ any technical staff that go to the sites. They are all off-the-book subcontractors.”

He says while some firms might have NICEIC or NAPIT on their sleeves or the side of the van, they are often “totally incompetent”.

Meanwhile, CertSure is fully accredited to ISO 17065 by UKAS, the official accreditation body of the UK government. That accreditation claims, the NICEIC is an “approved contractor scheme,” and that CertSure is accredited for “electrical work within the scope of BS 7671 “Requirements for Electrical Installations”, other than in hazardous areas.”

E&T says its source reported that “the only thing they mean for certain is that they have paid the money. These companies are scamming it.”

“The real victims,” he adds, “are tenants and people buying houses. The landlords are complicit; they don’t want a proper job. They just want the certificate to say they’ve had it done.” 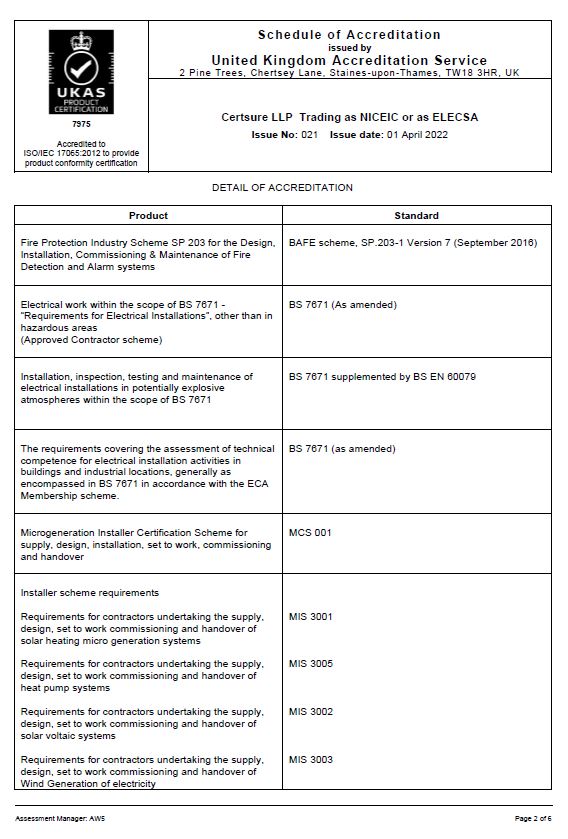 The electrical inspection scheme was implemented after the deadly Grenfell Tower residential fire, which killed 72 people. Multiple UKAS accredited and ISO certified companies were ultimately found responsible for the defective cladding and other surrounding issues which led to the fire, and yet at no point were the certification or accreditation bodies held accountable.

Armed with UKAS accreditation as a sign of competence, companies engaged in shoddy work or deceptive practices gain access to lucrative construction and other contracts. If UKAS were to follow its obligations under international accreditation rules, the companies would either never be accredited in the first place, or have their accreditations stripped.

In the case of Grenfell, none of the affected companies ever lost their accreditations, and still hold them to this day.

UKAS is a quasi-private body that has refused to alter its procedures or address controversies, even after it was found to have accredited bodies that support human trafficking, forced labor, genocide, and human rights abuses. UKAS CEO Matt Gantley is rewarded with an executive salary that is partly dependent on the quantity of accreditations UKAS issues, and not the quality of the resulting work. Protected by the UK government, UKAS and Gantley face no oversight nor repercussions when UKAS helps enable criminal activities or abuses.