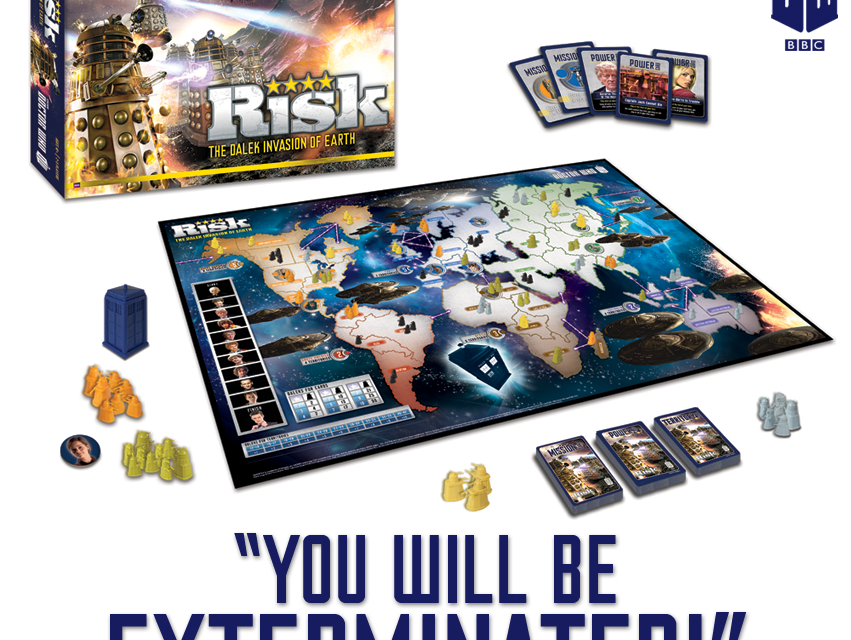 This promo graphic for the new BBC Dr. Who board game RISK: THE DALEK INVASION OF EARTH accidentally captured the entire spin-doctor tactics of risk managers currently infecting the contemporary dialog on business management. Have a look: With the inclusion of “risk” in ISO’s Annex SL mandate, risk managers from all over the world who have no previous experience with either ISO standards nor management systems, have suddenly been thrust into the spotlight and are — as they did during the Y2K debacle — taking every advantage to scare the lower intestines out of people in order to get empowered. But it’s not just because of ISO’s kowtowing; across the entire risk profession, the breathless Chicken Little skyfalling is ramping up to unprecedented levels.

As I reported earlier, the CERM Academy is using the abbreviation VUCA to de-shit people’s trousers, by insisting (without any facts, and in complete ignorance of the totality of human history) that we are now in an era of “Volatility, Uncertainty, Complexity and Ambiguity.” The Westney Consulting Group claimed we are in the “Era of Unusual Uncertainty.” Not to be outdone, Accenture claims we are in “An Era of Greater Uncertainty.”  It would appear the only thing uncertain is whatever adjective precedes the word.

PRMIA says we are now in the “Era of Systemic Risk,” while Greenpeace just calls it a “New Era of Risk” but one that will nevertheless kill millions with nuclear explosions. Denovati says we are in the “Digital Era” of risk, while the Wharton School, all the way back in 2008, went Biblical by claiming we live in the “New Era of Catastrophes.” PWC calls it “A New Era of Threats,” while a presentation made at the Conference on International Risk Sharing told us we are living in the “Era of Globalization.”

The Wall Street Journal declared we are in an “Era of Continual Risk Assessment,” which sounds like something any good risk consultant might want to promote, since it guarantees perpetual work.  Brand consultant Davide Scialpi screams in allcaps that we are in the “Information Overload Era.”

I could do this all day long, but you get the picture. The bleak, dark, trembling picture, where the zombie neighbors eat your children, but not before making them gay and poorly managing your mutual funds.

Risk management consultants can’t quite agree on what era we are in, but they know we are in one (calendar makers all over the world are thankful for that), and whatever it is, it’s something to be absolutely, bone-deep terrified about.

Frankly, having a Dalek scream “YOU WILL BE EXTERMINATED,” right before he blasts you with his egg beater or sucks your face off with his toilet plunger, makes the same point much, much faster, and with far less melodrama.