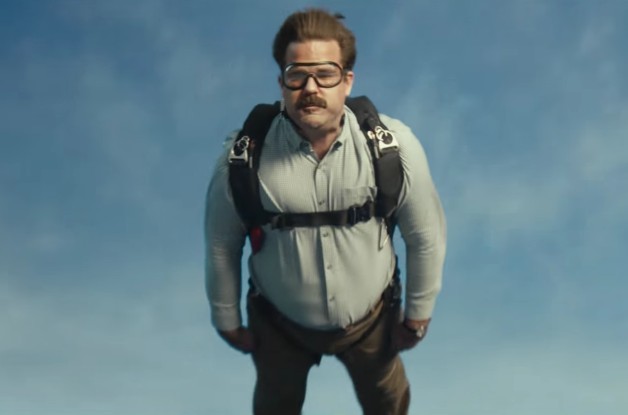 “Peter W,” the un-powered human sidekick of superhero Deadpool in the latest movie Deadpool 2 is totally trolling LinkedIn, and the motivational message obsessed goons on that social network don’t even notice. It’s mind-blowing.

In the move, Deadpool decides he doesn’t need to join the mutant superhero group X-Men, and decides to make his own “super duper fucking group” instead, called X-Force. The joke is that in order to find members, Deadpool has to “get back on LinkedIn.” From there he recruits Domino, Shatterstar and a few other superheroes (and even considered, briefly, Ruth Bader Ginsberg). Then “Peter” shows up to the job interview, and admits he doesn’t have any superpowers, but thought he’d show up because it sounded fun. Deadpool immediately hires him for his plucky can-do attitude, and pretty soon throws Peter out of an airplane to attack a convoy of mutant bad guys. Due to some high winds, things don’t go as planned, but “Sugar Bear” (as Deadpool refers to Peter) performs admirably, doing better even than Brad Pitt’s “Vanisher” superhero. I won’t reveal any spoilers beyond that, but there’s a wood chipper and acid vomit involved.

As part of their marketing, FOX then put Peter W. on social media, and he seems to be particularly active on LinkedIn, which probably paid for product placement in the movie. On LinkedIn, Peter claims to be the Regional Sales Manager at Excalibur Cutlery Co., and has an interest in beekeeping. His posts and comments are totally in-character, deadpan, and regurgitate the annoying, cloying and generally intellectually-vapid garbage that passes for “content” on LinkedIn. You know, stuff like this:

Which, subsequently, people seem to lap up like the “professional” morons they are. There are some who are in on the joke, posting comments that hint at Peter’s role with Deadpool while keeping the dry humor really subtle (a few just come out and ruin it by spoiling the movie), but the majority appear to actually think Peter is real, his advice is sage, and that beekeeping can be a metaphor for both professional and personal improvement.

Which is simultaneously hilarious and a sad commentary on just how stupid the online community is. It makes you wonder what’s next: a reality TV star elected president?

It’s also funny that Peter posted a full article featuring a photo of himself posed next to his wife “Susan” who is hugging a shirtless, rugged fitness instructor; the entire thing is clearly a funny bit on how Peter is so innocent, so doe-eyed, he doesn’t see that Susan is blorping her trainer while he’s away moonlighting for X-Force. And yet, again, the folks responding to the article don’t have a clue.

It’s a commentary on just how vapid “professionals” have become, how their pathetic searching for “gurus” and “thought leaders” allows them to be led to the woodchipper of ironic self-parody. There are two sure ways to guarantee massive “views” on LinkedIn: post some inane motivational garbage about “leadership,” or be a skinny blonde woman with 40 pounds of makeup posting about how she can’t get respect because everyone thinks she’s too beautiful. (Seriously, that’s a thing on LinkedIn; and I’m betting a lot of those women, well, aren’t.)

If you’re not following Peter W on LinkedIn, do it right now. Unless you’re smart enough to have avoided LinkedIn altogether. I wasn’t.