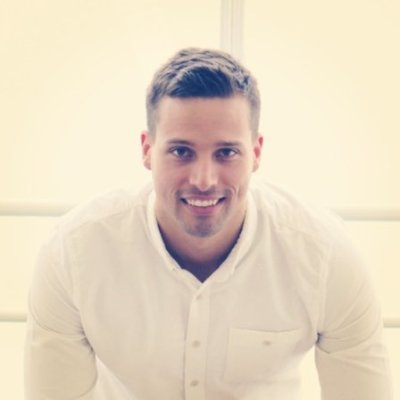 Meet Andy Whittle, co-founder of the British ISO consulting firm WRK Training, an official CQI and IRCA training partner. Whittle has revived one of the most fallacious, debunked and derided marketing claims from the ISO 9001 basement of ideas, that ISO 9001 certification reduces insurance premiums. It’s a particularly nefarious claim not only because it’s an outright falsehood, but also because it only leads to a thudding disappointment when duped users find out it’s utterly untrue.

The myth began in the late 1980’s, nearly exactly when ISO 9001 was first released, and was pitched by a handful of noisy consultants. The claim was then famously referenced by ISO 9001 author JP Russell in the ASQ Quality Auditors Handbook 2nd Edition from 1999. In that book, Russell wrote:

There is a myth pushed by some registrars that third party registration is a strong defense in the event of a product liability lawsuit. This is not necessarily true. It apparently began when some insurance company in the UK offered discounts of 20 to 40 percent to companies that achieved ISO 9001/2/3 registration.

Subsequent research proved that this was impossible to verify, and Russell could not produce any records to support the passage in the book. No one had ever made the claim again, until it arose again in 2012 during the much-maligned development of the snow and ice management variant of ISO 9001, called SN9001, created by a deeply conflicted partnership between the accreditation body ANAB, registrar Smithers, consultant John Allin and the American Snow Contractors Association (ASCA). 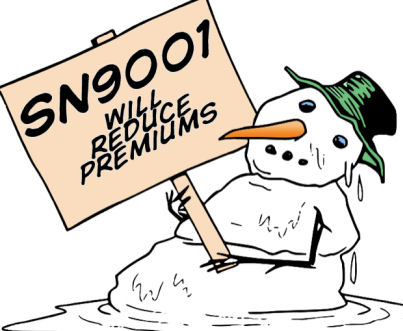 The four organizations colluded — against ISO accreditation rules, we maintain — to invent, out of thin air, an entirely new certification scheme for snow plow companies, and even managed to get their “standards” accredited by ANSI, which whom ANAB has considerable sway. ASCA President Kevin Gilbride began claiming, without evidence, that SN9001 would reduce insurance premiums, a claim that was then repeated by Mills Insurance, who happens to be a board member of ASCA. A representative of Mills, when pressed by Oxebridge, eventually backed off the claim by saying any such reductions would only occur if the industry — as a whole — saw some benefit of SN9001 certification. There appear to be less then 25 companies that have ever certified to SN9001, although ASCA provides no official records of this. Oxebridge subsequently submitted requests that Mills Insurance be investigated for insurance fraud, as insurance providers are disallowed from making false statements in their marketing; it’s not clear what the status of that investigation is, or if it ever was launched. (We may have to poke that bear again, so stay tuned.)

Gilbride — whose sole professional experience is magazine publishing, not snow and ice management — has tripled-down, claiming that “two companies” reported insurance premium savings of “more than $25,000” but didn’t provide any evidence whatsoever to support the claim. This was then repeated by Perry Johnson Registrars, which offers SN9001 certification but to date has not been accredited for it, since it last reported it has no clients for SN9001. Likewise, Smithers’ executive Jeanette Preston has parroted the claim in the marketing for their SN9001 certifications.

It’s important to note that there exists not a single bit of evidence over ISO 9001’s 30 year history that anyone has ever seen an insurance premium reduction because of certification. The claims are routinely trotted out only by those selling consultant and certification, and never include evidence in any form.

Now WRK Training has revived the false claim, in a breathless post on LinkedIn entitled “Someone Finally Said It! The Number 1 Benefit of Implementing a Quality Management System When You Don’t Already Have One,” written by Andy Whittle. The article is a brief, and intellectual vacuous, bit of self-promotion in which Whittle seems to honestly believe that people would be shocked to learn that companies adopt ISO 9001 in order to make money. It would be sophomoric if we meant sophomores in middle school. 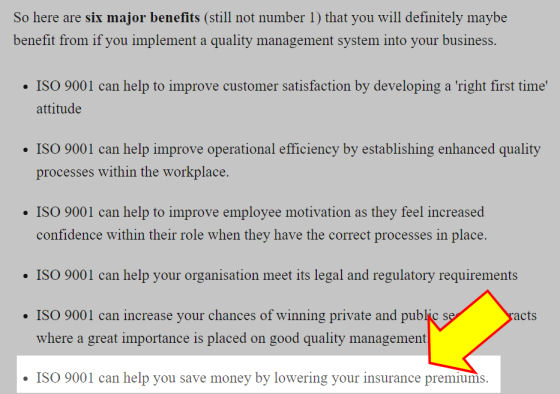 Whittle also relies on the ISO talking point that “one million companies are certified to ISO 9001,” but fails to notice that (a) that number has flatlined since 2009, and (b) one million companies is statistically insignificant when one considers just how many companies exist on the entire planet.

Now, if we give Whittle the benefit of the doubt and believe that he has somehow cracked the case on getting insurance companies to reduce premiums for a certification that still allows companies to turn automotive airbags into hand grenades, then we should hear what he has to say. I have asked Whittle to produce evidence of a premium being reduced directly because of ISO 9001 certification, so perhaps he still can prove his claim. I’m not holding my breath, since I have a fair understanding of how underwriters develop policies and how insurance companies adjust premiums, and certifications have nothing to do with it.

UPDATE 21 March 2017: Whittle responded to this article, although not to messages sent to him on LinkedIn. He did the “fratbro” routine of pretending to be LOLing about the whole thing while tossing as many insults my way as he could, insisting he wasn’t upset at all. If ever a response deserved a “u mad, bro?” it was his.

I asked him three times to produce one shred of evidence that ISO 9001 reduced insurance premiums, and he deflected, dodged or ignored the question each time. Rather than prove his case, he instead ran to the Ripoff Report and Daryl Guberman posts that come up when someone Google’s me, and tried to trash me based on those, unaware of who Guberman is, and just how much damage it does to his own reputation to be aligning himself with a certificate mill operator that sells certificates to standards that don’t even exist.

Eventually he huffed away, saying, cryptically, “No Chris, honestly I’m laughing.  It is clear as day that you are the angry one here and it’s obvious what kind of character you are. Anyway I’m not looking for your excuses and I’m not interested in your threats either.  Good luck with the next person you take up a vendetta with.”

Again, he was given multiple opportunities to prove his claim, which should take all of five minutes and a single email if they were true, but failed to do so. You can assume what you like from that.