An independent whistleblower provided Oxebridge with evidence that suggests Eurolab, a division of the Turkish certification body TURCERT, produced test reports for nitrile examination gloves manufactured by AE Glove, from Thailand. The test reports cited two international testing specifications, ASTM D-6139 and EN-455, but then do not appear to provide accurate data in accordance with those specifications. 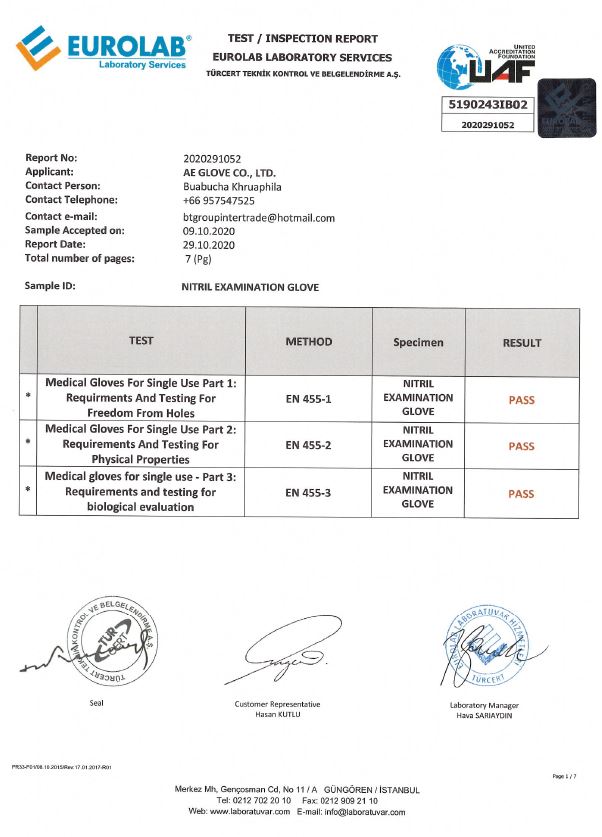 In its review of two test reports, Oxebridge found multiple irregularities. For example, rather than include actual test results for physical dimensions, TURCERT appears to have copied and pasted the acceptable dimensions from the ASTM D-6139 standard itself, and then placed that in the report under the section for “RESULTS.”

Likewise, the results for accelerated aging tests were copied and pasted from ASTM D-6139, and did not appear to include actual measurements taken.

None of the certificates indicated a product number, batch or lot number of the units being tested, nor evidence of sampling. While a statistical sample size was referenced, the EN-455 certificate did not include “batch size, sample size, number of non-conforming gloves” as required by that standard.

Oxebridge filed a formal complaint via email to TURCERT which was rejected merely one hour later by the laboratory’s CEO, Hasan Kutlu. In his response, Mr. Kutlu claimed — bizarrely — that AE Glove had conducted the tests, and not TURCERT. This may be attributed to poor English phrasing by Mr. Kutlu. He then cited “confidentiality” laws, saying, “we will not give you comments and opinions on the report.”

We never give misleading information. We only talk to the customer over the customer’s report. This is due to our contract with customers.

Oxebridge then escalated the issue to TURCERT’s accreditation body, UAF.

I see you browse the internet and use it to spend this kind of time with yourself. Please put your energy into your own business.

When I examine your web page, I can see that you are only preparing such articles. I recommend that you study the standards thoroughly so you can learn about conformity assessment bodies.

We cannot allow you to insult our company using your personal opinion or the scenario you have prepared against us.

It appears that Mr. Kutlu may have sent the latter email before reading the escalated complaint to UAF; however, he did copy the email to UAF official Yuliya Lalova.

Multiple complaints have been filed against UAF accredited bodies to date. The accreditation body is run by Dr. Tejwant Chandhi, a doctor of internal medicine in North Carolina.

Oxebridge has operated an ISO Whistleblowing program for some time, and processed dozens of formal complaints and investigations into fraud and conflicts of interest in the ISO certification scheme. It announced it had launched a PPE Fraud hotline only days ago, and has already received four filings through that system. One of those has already been referred to law enforcement in Nevada.

The full complaint against TURCERT, filed with UAF, can be read here. (PDF file, 3.9 MB)