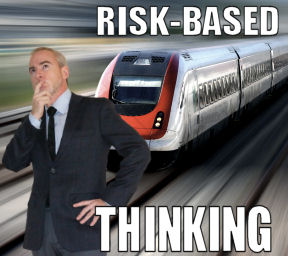 Oxebridge VP Operations Christopher Paris will present Risky Business: Surviving the Future of ISO 9001:2015 to the ASQ Section 300 in Manhattan on November 12th, 2014. The event will be held at Fordham University, and tickets may be purchased from ASQ via this link.

The discussion goes over the problematic development process surrounding the new edition of ISO 9001, as well as some of the controversial decisions made by TC 176 and the ISO Technical Management Board that led to the latest DIS version of 9001:2015. Mr. Paris talks openly about the problems facing users with the new “risk based thinking” requirements, which — he argues — have been invented “from thin air” and are not based on any known best practice, nor were they the result of proper international consensus.

In addition to revealing the problematic path towards 9001:2015’s release, Mr. Paris presents “survival strategies” that companies can adopt when implementing the new version, and how to leverage the vague language, lack of firm requirements and open-ended policy statements to the benefit of the end user organization.

Not an ISO sales pitch, this presentation is one of the most frank, honest and hard-hitting critiques of ISO 9001:2015, and the ISO standards development process itself, but one which ends on a positive note, providing a definitive plan on how to get the best out of the coming changes.