Meet Husk Registrars LLC of Wisconsin, an IAS-accredited certification body that sells ISO 9001 and other certificates. Since about October of 2022, I was receiving whistleblower complaints alleging that Husk was certifying its own consulting clients. Husk’s owner, John Senter, also operates the ISO 9001 consulting firm SenterStone Quality Consultants (AKA “SenterStone Consultants”), and we uncovered a pattern of concerns where Husk would certify SenterStone’s clients.

It didn’t take much sleuthing, mind you. On Senter’s own Instagram account, as well as the Facebook accounts for both Husk and SenterStone, the conflict of interest is very much front-and-center. Repeatedly, dating back to at least 2020, the two companies boast about their relationship and openly market each other’s accomplishments.

For example, a May 2020 Facebook post under Husk’s name congratulated Machining Concepts of Germantown WI for undergoing internal audits by SenterStone. The Machining Concepts website then reveals that it received ISO 9001 certification from Husk just a few months later, in July 2020. 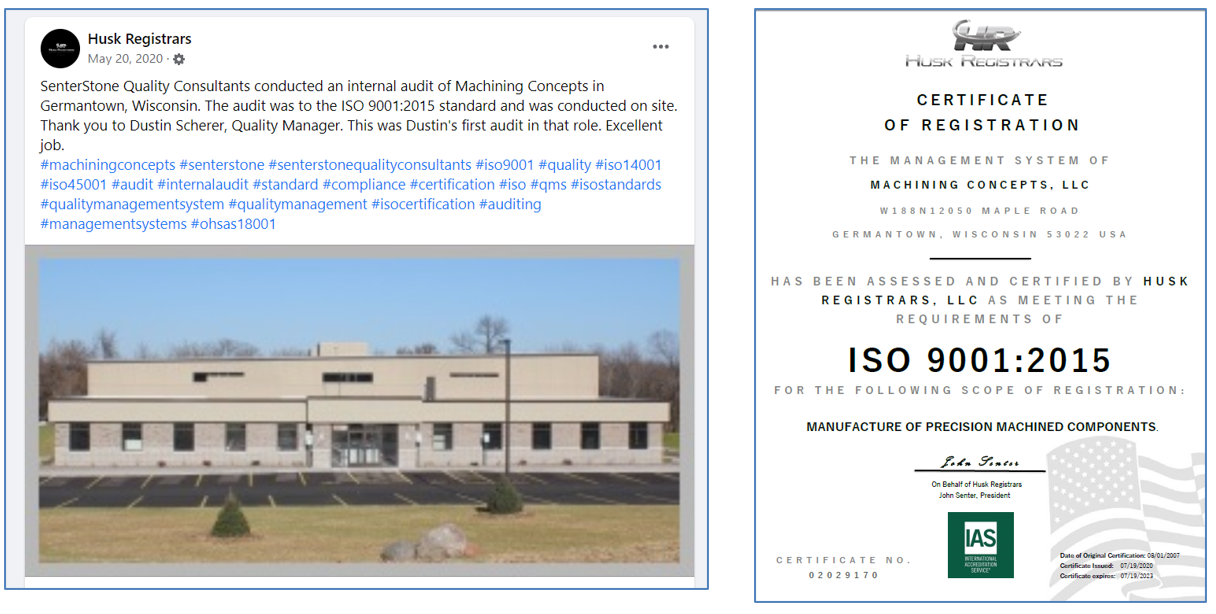 We found other examples of this, as well, where posts by one of Senter’s companies would point back to the other, while the companies were certified by Husk. Here’s another example related to Husk client Processed Metals Innovators of Bloomer WI: 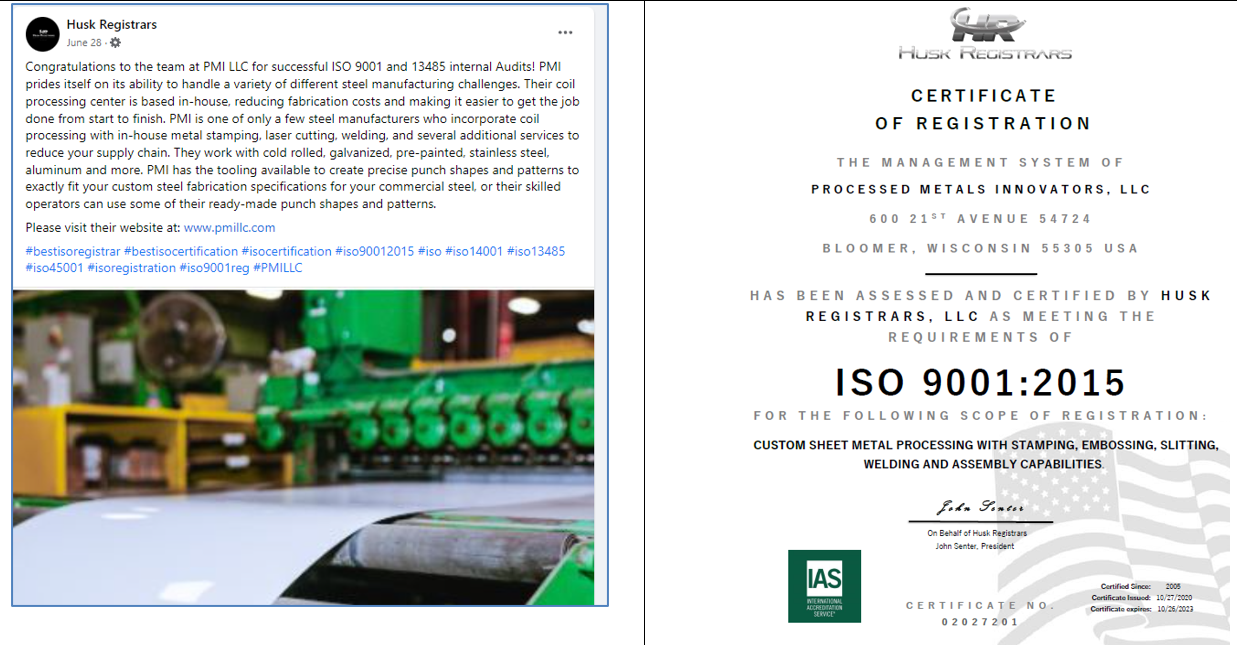 And another for Expert Cores of Milwaukee WI: 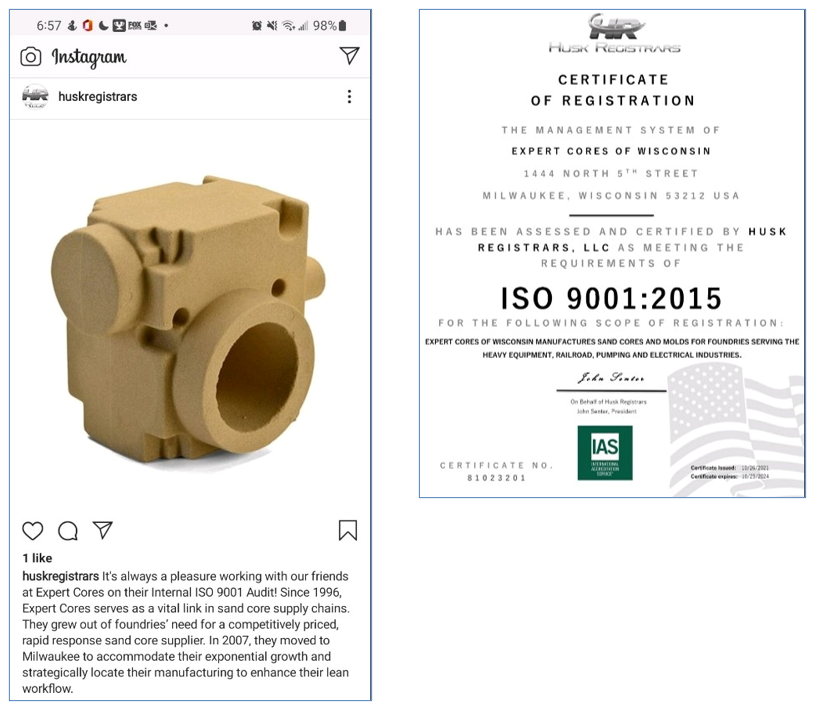 I reached out to Senter on LinkedIn before taking things further, and it — predictably — went sideways fast. As usual, the CB rep acted offended and immediately threatened to sue, even though I hadn’t even filed a formal complaint yet. More strangely, Senter made up some wild conspiracy theory that I was acting on behalf of some unknown friend with a certification body. (Senter does not know that, thanks to the ISO Whistleblower Program, I don’t have any friends with certification bodies.)

Here’s the full chat, and — again — you can see how quickly it turned ugly:

Senter’s claim that Husk and SenterStone have “separate employees” and “separate management structures” seems disproved not only by the words under his photo in the very chat in which he made the claim, but also by his own LinkedIn profile, which shows him as the President of both companies: 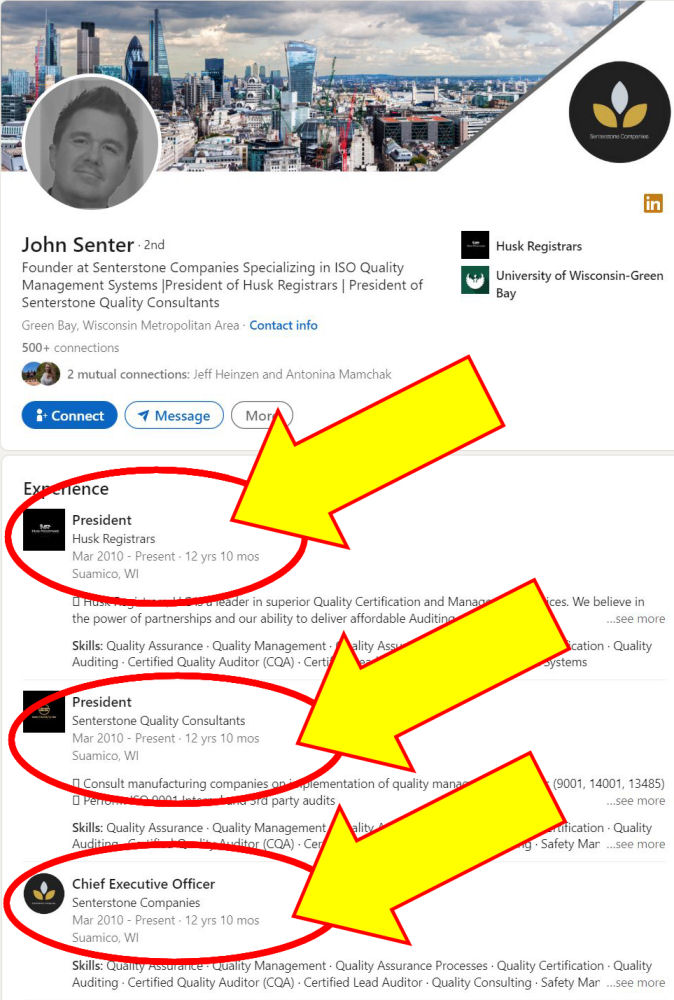 Husk is accredited to ISO 17021-1 by the International Accreditation Service (IAS), which is the go-to body for those wanting cheaper and easier accreditation. Repeatedly we have reported similar violations of other IAS-accredited bodies, only to have them drop the complaints entirely or drum up some wild excuse as to why they won’t do their job and enforce ISO 17021. Likewise, complaints against IAS itself have gone unanswered, as the entire accreditation pyramid scheme is left largely unregulated.

So while a formal complaint has been filed against Husk — you can read that here — it’s unlikely to see any activity with IAS as the main oversight body.