In a statement that largely blames the United States, the International Organization for Standardization (ISO) announced it will not eject Russia from key technical committees, but will continue to work normally with that country despite growing international sanctions. The move is largely intended to placate China and India, two of the largest key ISO markets.

The ISO statement, signed by Secretary-General Sergio Mujica, then puts the rationale for the position on the shoulders of the American National Standards Institute (ANSI), writing:

ANSI currently advises that continued participation in international standards development activities involving Russian participants is permitted where the process remains open and shared information is not proprietary or controlled.

ISO then links to a statement made by ANSI, claiming, “Russian experts can participate in the standards development process.” That position was based not on any current guidance, but instead by ANSI’s legal counsel, Patricia Griffin, relying on prior guidance from the US Dept. of Treasury on sanctions against Iran. That position was determined in 2012, ten years prior to the Russian invasion of Ukraine, and was specific to US CFR 31 Part 560 “Iranian Transaction Regulations” (ITR). The conditions for the implementation of ITR were entirely different from those triggering the US’ sanctions against Russia in 2022.

Both ANSI and ISO have pushed to ignore sanctions against Russia, largely due to the growth of the ISO standards market in China. ISO’s current President, Ulrika Franke, has ties to China, as have the prior four ISO presidents. Franke was “strategic advisor and honorary professor at the Joint Construction Center for China Smart Urbanization of High Density Areas at Tongji University in Shanghai.”

One source reported previously that ISO is also “sensitive to the position of India,” another growth market for ISO standards. China supports Russia’s invasion of Ukraine, and India has refused to denounce Russia for it.

The ISO statement says nothing about Belarus, the other nation currently under sanctions for its support of the Russian invasion. It is expected that Belarus will join Russia in its ground assault against Ukraine.

The ISO ruling will allow Russians to continue to participate in key technical committees, including at least one related to aerospace and defense.

The ISO statement does not address ISO’s commercial activities in Russia, from which it earns revenue.  ISO sells its standards directly to Russia via its own webstore, as well as through an official Russian distributor, Rosstandart. The money received by ISO from Russia through these sales may violate sanctions far more than having Russians participate in standards committees.

ANSI acts as the US’ official standard body, but over the past decade has distanced itself as an “American” organization. It previously owned the American Society for Quality, and re-branded that organization to be referred to simply as “ASQ” in order to de-emphasize its US origins. ASQ then pushed hard into the Chinese market, funding a full “ASQ China” division, in order to offset flagging US membership.

ANSI later sold ASQ, but still owns the accreditation body ANAB. That body first declined to denounce Russia, but then later reversed course and opted to “self-sanction,” denying accreditation in Russia. ANAB was receiving funds from the certification body Russian Register, which had issued ISO certificates to companies included on the US and EU sanctions list, raising questions about money laundering.

ISO President Mujica previously congratulated Russia and Belarus one week after the invasion of Ukraine. He has not withdrawn that statement. While working as a government bureaucrat in Chile, Mujica’s customs agency was accused of fraud and drug trafficking.

The full ISO statement may be read here (click to enlarge): 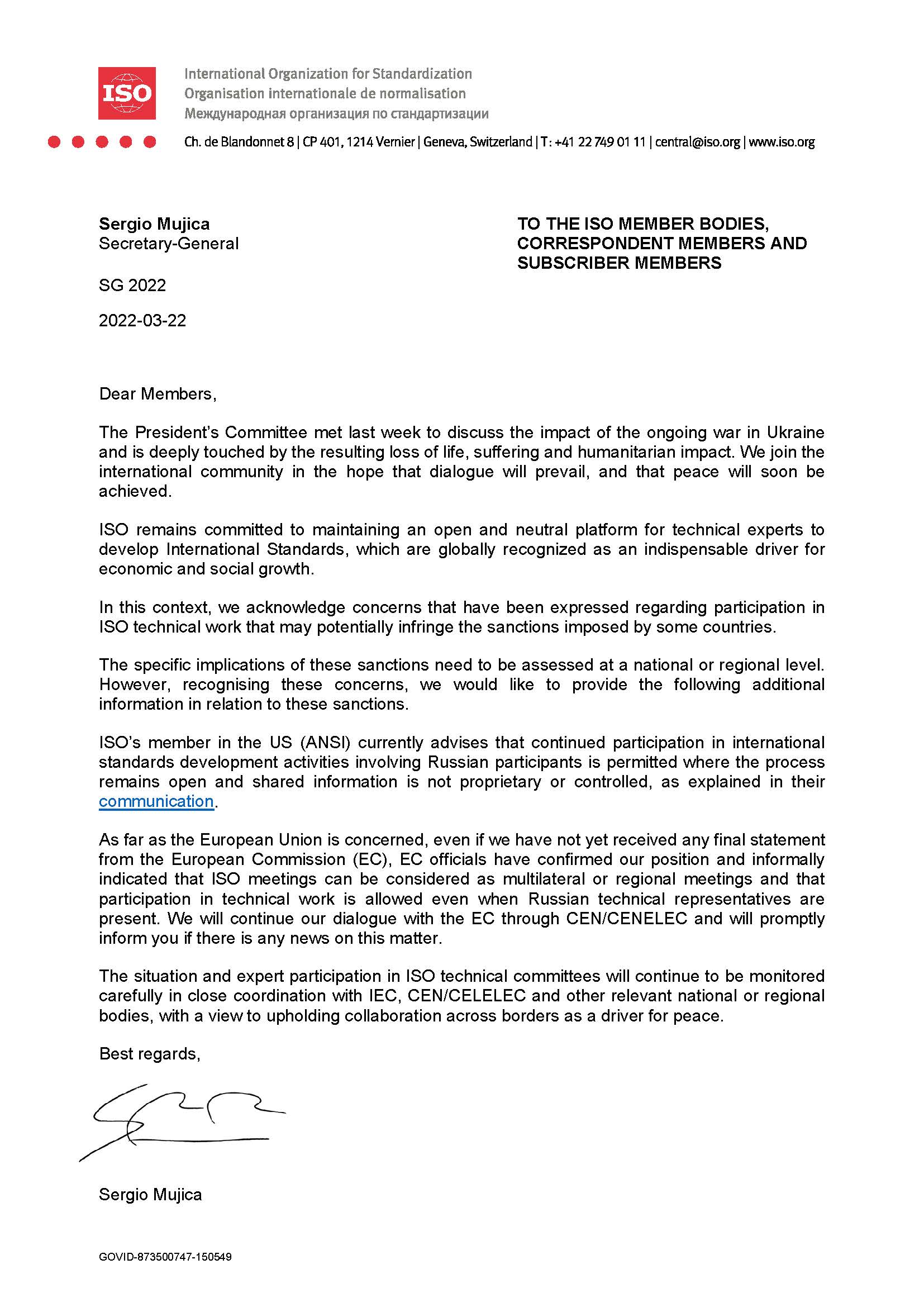