As US Coronavirus Deaths Surge, IAQG Still Insists on On-Site AS9100 Audits

The International Aerospace Quality Group (IAQG) continues to put its head in the sand related to the real risks of demanding on-site audits for AS9100 and related standards, while the US cases of COVID-19 skyrocket. In fact, it’s not clear how many cases are being transmitted by IAQG accredited registrars who are, themselves, forced to travel the country and perform in-person audits, exposing themselves to thousands of workers.

The IAQG has, to date, taken half measures that are wholly unacceptable during a national disaster the country has never encountered before. Half measures in such cases will result in real death, and the IAQG has to own that.

What they have done so far, is largely shirk responsibility back to the International Accreditation Forum, and its lame IAF MD4 document, which defines how remote auditing may be performed. That document — written years before any pandemic was imagined — includes wimpy language requiring CBs to perform a “risk analysis” in order to determine whether remote auditing can be performed or not. This presumes that the CB can decide not to perform remote auditing, which is exactly what some CBs are doing.

The IAQG then makes things much worse by demanding new AS9100 clients still undergo at least 30% of their audit in-person, on-site. In June, the IAQG waived this for AS9100 recertification audits or surveillance audits, but not for initial certification audits. In other words, the IAQG is taking a craven, business-focused decision to limit the risks of death for its current certificate holders, but not extending this to new companies. The spice must flow.

From the latest IAQG update on the matter: 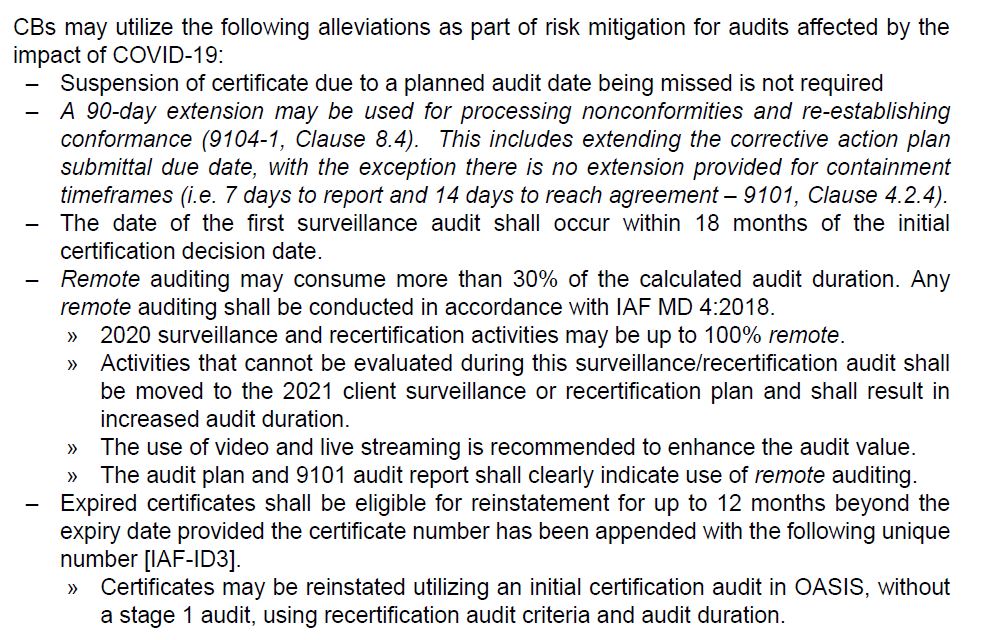 What this will do is either damage the AS9100 scheme by essentially “closing the tap” on any incoming companies to the scheme, and/or just outright kill people.

Also, like the IAF, the IAQG is relying on ludicrous time periods based on the human calendar (“90-day extension”, “12 months”) even as the coronavirus itself has shown neither the ability to read a calendar, nor abide by human beings’ sense of time. Why? Because it’s a virus.

The IAF’s obsession with “six months” has already been blown out of the water, as the virus is now already in its seventh month within the United States, and only growing… not flattening.

Bring Out Your Dead

Now factor in another inconvenient fact: the majority of AS9100 auditors are post-retirement age, in their 60’s and 70’s. It’s rare to find one as young as 55. This means the people the IAQG is forcing into the field face the highest risk of death should they catch the virus from their client. Will Tim Lee pay the families of auditors for their funeral expenses? Don’t count on it.

Meanwhile, the IAF has ensured that its ultimate stakeholders — the accreditation bodies like ANAB and UKAS — are protected, allowing them to transition to 100% remote auditing. They are only there to protect themselves.

The cynical, craven nastiness of the IAQG and IAF is well-known, but even this pushes the boundaries beyond belief. The industry should have agreed to the commonsense call by Oxebridge for — at least! — a 12-month pause on all certifications, period. Stop on-site auditing entirely until this passes. If more than 12 months is needed, then so be it. At the same time, we have proven that 100% remote audits can be done effectively while ensuring security compliance with ITAR, a significant factor in the aerospace and defense industries.

But the usual suspects are doing the usual thing, and not listening to any outside feedback. Bunkered down in (virtual) committee meetings, Tim Lee and his gang from Boeing and Lockheed are making bad decisions that will literally kill people.

This is unacceptable. If you’re paying attention at all, Boeing, you should recall your employees from the IAQG and TC 176 and then consider whether to fire them outright. You’re exposing yourself to mighty litigation in the meantime.