Oxebridge Quality Resources International is requesting the International Accreditation Forum (IAF) automatically extend all the certifications and accreditations under its oversight for one year, to allow the coronavirus global pandemic to subside. Oxebridge is asking the IAF to use its influence to then extend to industry certifications such as AS9100 for aerospace, and IATF 16949 for automotive manufacturers.

Oxebridge founder Christopher Paris has released an industry-wide “Public Call” document addressed to the IAF formally requesting this unprecedented need. The public is urged to download the document and send it to Elva Nilsen, the IAF Secretary, at secretary@IAF.nu and Xiao Jianhua, the IAF President, at xiaojh@cnas.org.cn.

The PDF of the full Public Call document may be obtained by clicking the image below. For a Spanish language version, click here. 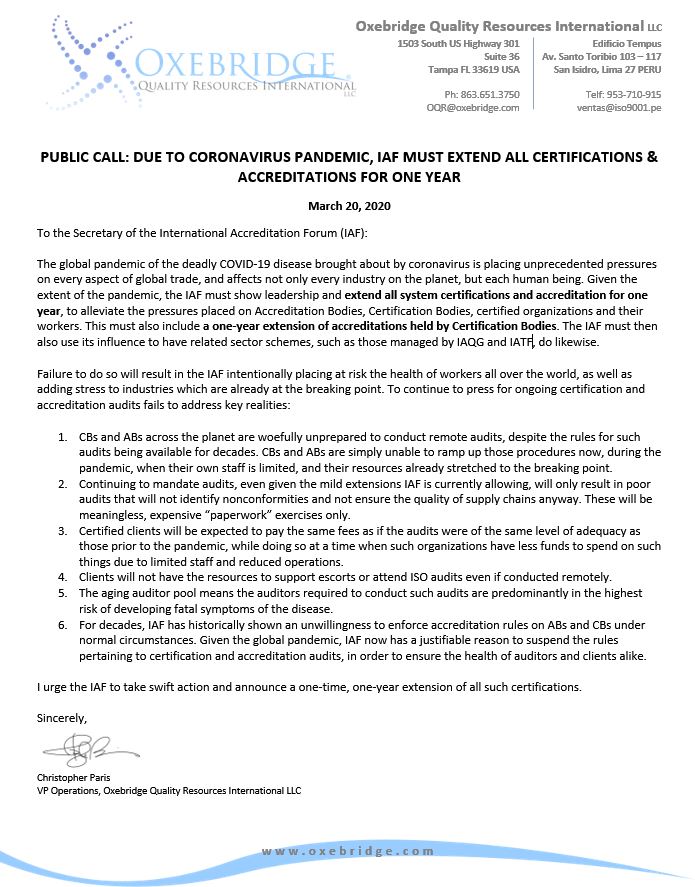 Oxebridge’s “Public Call” documents have proven to be an effective tool in garnering and organizing public support on key issues, and the company uses them sparingly. The latest such document represents only the third time Oxebridge has issued a Public Call. The first was released in 2013 calling on TC 176 to delay development of ISO 9001:2015 to address industry and global feedback. The second was released in 2015, asking ANSI and TC 176 to refuse to ratify ISO 9001:2015 for having failed to take into account that feedback. Both documents received widespread support, but ISO refused to act on them. As a result, ISO 9001:2015 has seen the largest loss of users ever in the standard’s history, something widely attributed to ISO’s refusal to address criticisms with the standard.

In an email to the IAF and IAQG, Paris wrote, “Regardless of whatever you think of messenger, the proposed solutions will save human lives, including those of your own staff and audit pool. Now is not the time to reject this proposal out of hand. The IAF and IAQG must put the safety of persons above their own financial wellbeing and industry status.”