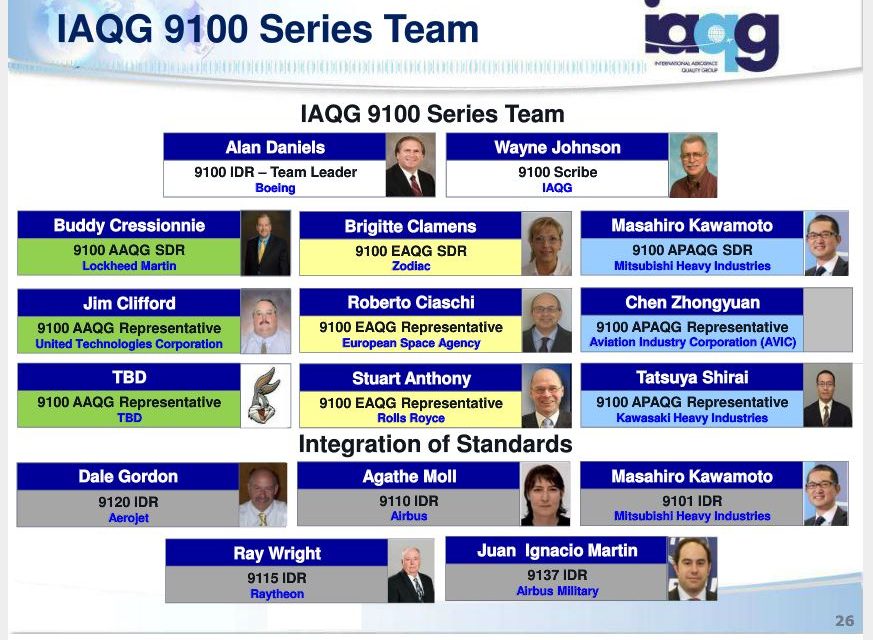 I recently applied for membership in the AAQSC, the group that authors the AS9100 standard, in the hopes of getting some user-centric representation, since it’s currently dominated by registrars and a handful of large aerospace primes. That didn’t go well, and with remarkable speed the AAQSC rejected my application. One of the reasons given was that they claimed I would not represent myself as an “individual participant”, but instead represent an “unidentified group.”

Why is that an issue? The official rules claim that members must “function as individuals and not as agents or representatives of any organization with which they may be associated.” (SAE Technical Standards Board – Governance Policy clause 2.4.2.3.)  In her official rejection to me, Membership Chair Elizabeth Ray explained:

The SAE Aerospace Council Organization and Operating Procedures also require that participating members function as individuals and not as agents or representatives of any organization or group with which they may be associated.

(Ms. Ray didn’t seem to notice that she had sent the rejection from her official Rockwell Collins email account, which would seem to indicate that she herself isn’t acting as an individual, but with official Rockwell approval — since they are allowing her to use their IT resources in day-to-day execution of her role as Membership Chair — but that’s a nitpick.)

Fair enough. Except that anyone who knows anything about the AAQG and its international brother, the IAQG, knows that members function as representatives of their employers, and that this fact is openly touted and announced at nearly every opportunity, in gross violation of this secret rule.

As part of a promotional blurb for an upcoming official SAE webinar on AS9100 changes led by Buddy Cressionnie, it plainly states Cressionnie is representing his employer, Lockheed (emphasis added):

Mr. Cressionnie is currently the Americas IAQG 9100 Team Lead responsible for maintenance, revision, and clarification of the AS9100 standard. He is active in standards development as a voting member of the US Technical Advisory Group (TAG) to ISO/TC 176 which writes ISO Quality Management System standards. He serves on the US TAG Interpretations Committee and is the Aerospace Sector Liaison to the US TAG. Mr. Cressionnie represents Lockheed Martin in these roles where he works in the Aeronautics Business Unit, a 31,000 employee operation across nine sites.

If there’s any question as to whether Cressionnie is on the AAQSC, we can put that to bed: That’s the tip of the iceberg. Multiple official SAE, IAQQG and AAQG branded presentations fill the internet with evidence that, at every turn, these groups link their leaders with their employers. From a single presentation given by Alan Daniels in 2013 (“Quality Systems – The Bedrock of Your Quality Efforts“), whenever a member of the one of the teams is mentioned, their name is placed next to the name of their employer, giving any reasonable reader the clear impression they represent those organizations. In fact, four entire slides are dedicated to showing how these individuals are actually representing a small set of “approved” corporate sponsors: The slide for the EAQG team even sorts the list by employer, rather than by individual name: A similar set of listings appears in another presentation on the development of AS9100 rev D, the very subject which the rejection letter was so concerned about. I won’t bombard you with more screenshots, but you can view the slide deck here.

The question now becomes whether or not the AAQG and its various related organizations are engaging in potentially illegal collusion, by allowing access by representatives of certain organizations  while denying access to any organization seen as a competitor or end user. While the whole thing is likely to be dismissed as trivial by the AAQG gang, the legal ramifications are fairly staggering.

First, the SAE/AAQG must abide by ANSI rules for fair representation, which carries with it certain regulatory responsibilities when dealing with the US Federal Government. Next, key government contracts require AS9100 for bidding suppliers, and that requirement is based on trust that the standard and certification scheme is executed in a non-exclusionary fashion, lest violations of the FARs be risked. Finally, there’s the trade angle: if key companies such as Boeing and Lockheed exercise selective enforcement of rules to their benefit, and to the detriment of their competitors or independent AS9100 standards users, an argument can be built that they are engaging in unfair and deceptive trade practices, in violation of the FTC.

I’ve written back to Ms. Ray and the usual leadership guys for a reaction and explanation. I’ve advised them to bring their legal counsel into the conversation, as this isn’t something that’s likely to go away.

And, yes, this all ties in with poor Joe Bhatia and his testimony before Congress, which is looking to be more and more untrue every time we blink. I’ll bring him in on this shortly to get his take.

UPDATE 6/25/2015: It gets worse, of course. On LinkedIn, former AAQG rep and Lockheed Martin employee Jack Fletcher — you may remember him from here — chimed in with a list of his personal speculations on why the application was rejected. Resorting to the usual lowbrow defamation and dirty tricks that seem to be the hallmark of AAQG reps (former or otherwise), Fletcher accidentally slipped more evidence into the argument.

On his own LinkedIn profile, Fletcher publishes that he was an official representative of Lockheed Martin while acting on the committees: