Coming on the heels of the release of ISO’s annual ISO Survey data, it’s worth examining whatever similar data we can get on AS certifications worldwide as well. This represents an analysis of AS9100, AS9110 and AS9120 data in the IAQG’s Online Aerospace Supplier Information System (OASIS) as of September 2019.

Crunching numbers in OASIS is harder, since there’s no export feature in this case, or not one I could find anyway. Instead, without manually scraping the data line by line, we can get rough totals for all three standards. But one can only get data as of the exact moment they are logged into OASIS, without any historical data behind it.

Fortunately, Oxebridge has taken snapshots of the data over the years, which then allow us to create some mile markers. Specifically, I will use data captured in 2008, 2015 and 2019. That gives us three data points, which yields a rudimentary, but sufficient, picture of how AS certs are faring.

Despite the IAQG’s prior goal to ensure “95% of the supply chain” becomes certified — that was always a ludicrous goal, since no one even knows how big the “aerospace supply chain” is — it’s nonetheless impressive. The growth has been remarkably steady, unlike the scattershot pattern we see with ISO 9001 or ISO 14001. 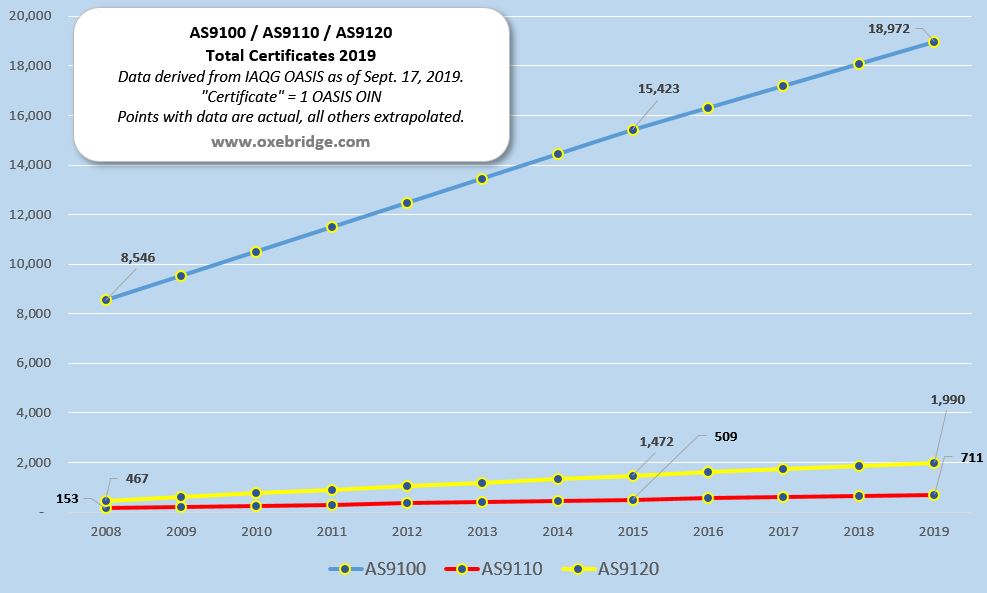 What we see is consistent growth, for one. There are no dips or turns, and the growth rate itself is relatively constant. Keep in mind, this data is rough, and limited by my clumsy use of OASIS for purposes it’s not designed. These numbers are likely pretty close, though.

OASIS doesn’t really organize itself by certificates, which complicates things somewhat. Instead, entries are made by “OASIS Identification Number,” or OIN. Every database entry in OASIS gets an OIN number, so that means a certified company will get one, as well as a certified AS auditor. Ignoring the auditors, it works out that roughly speaking — and, again, unless I’m misunderstanding this entirely — each certificate issued is tied to an OIN, which then generates the billing that IAQG charges the attendant Certification Body.

So in a nutshell, we can interpret one OIN as being one AS91xx certificate. At least until someone can explain to me a better understanding.

Whereas ISO is getting wrapped around its axle on whether to count “certificates” vs. “sites,” OASIS data doesn’t get that fussy. One OIN may have multiple sites or a company with one site may have multiple OINs (if they’ve divided their certificates somehow.) So it’s sort of all moot.

Here are some rough takeaways:

Without a manual scrape of the data, too, we can’t do a geographical breakdown of the data, so this is simply all certificates, everywhere.

Another thing this data doesn’t show us is what is driving AS91xx certification. I can tell you my anecdotal evidence points solely to customer or government mandate. Around 2010 or so, about 50% of Oxebridge clients who pursued AS91xx did so because they wanted to break into the aerospace industry or were already in it, and wanted to use it for process improvement. The other half did so because of a customer mandate, such as Boeing, NASA or Honeywell. Now — in 2019 — the numbers are dramatic: 95% of Oxebridge clients pursue AS91xx because of customer mandate; only 5% do it for kicks.

These numbers are still paltry given how many likely aerospace supply chain companies there are. Remember, this includes any company operating in any of three possible industries: aviation, defense and space. That’s a huge pie to try to fill.

One final point. A lot of people try to blame AS9100 for the decline in overall ISO 9001 certificates. This is a bogus argument for two reasons. First, AS9100 includes ISO 9001, so companies that get AS9100 certified get a simultaneous ISO 9001 certificate alongside it. That means they show up in the ISO Survey data anyway.

So while ISO 9001 is dying, at least IAQG can brag about growth, even if the figures are still pretty small.