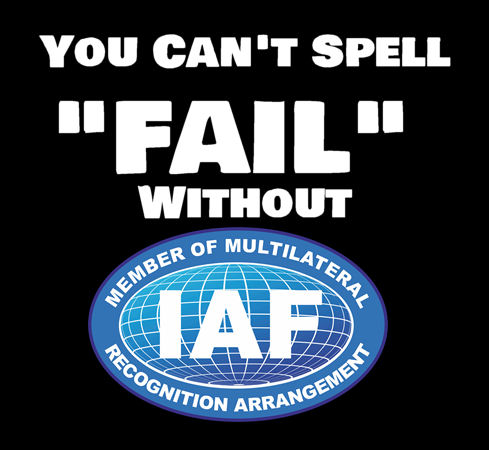 The IAF has released another of its hyperbolic claims alleging its the greatness of its own customer base while providing exactly zero evidence. This time it has published an article declaring “Transition Rate Confirmed at 93% from IAF Members.” The only problem is that IAF has not really “confirmed” this alleged fact, since it doesn’t really have the data. As a result, the article doesn’t provide any such data to support the breathless exhortation.

By the end of September 2018, data gathered from IAF Accreditation Body members and their accredited Certification Bodies gave a 93% transition rate to the 2015 versions of the quality and environmental management system standards ISO 9001 and ISO 14001.

It’s a strange bit of wording at play here: the CBs “gave a 93% transition rate.” To whom? How? This isn’t provided, but it does sound like IAF just say back and accepted whatever data its ABs and CBs gave it, without requiring the data to be vetted, and without doing any confirmation itself. This assumes there was ever any data at all, and IAF isn’t just fibbing entirely.

The article then says, “This is the first time IAF has collected such data and provides an excellent opportunity for IAF and its members to track future transitions.” This claim is also unlikely, as IAF bodies have been providing total certificate data to ISO since 1995. That data is published annually by ISO as “The ISO Survey,” and was previously published as “The Mobil Survey” before ISO took it up. The IAF’s article makes it appear this is the first time in 23 years that it ever looked at the ISO Survey data, but I personally know that’s not true since I once presented the data to IAF leaders personally, calling out problems facing the scheme as far back as 2004. 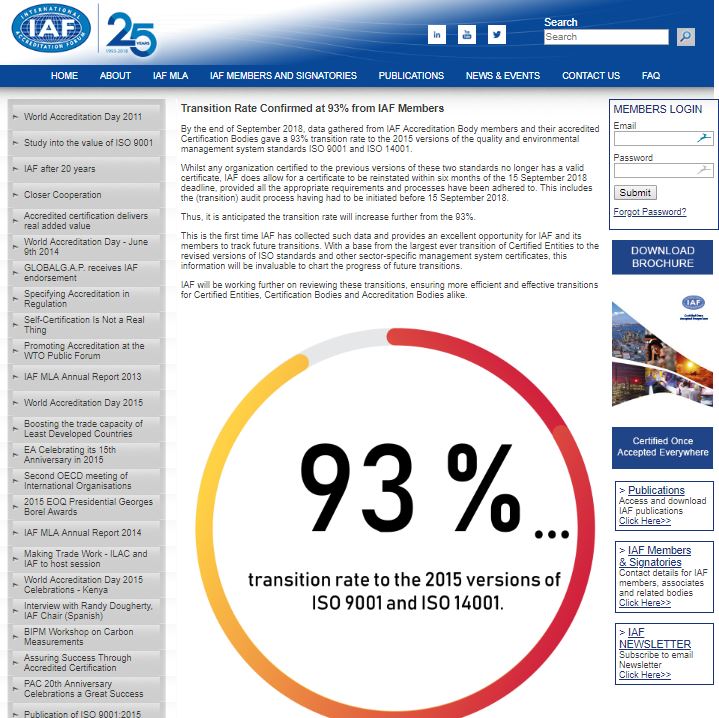 Someone at IAF knows how to make really big graphics.

The IAF is also not truthful when it says this is the “first time” the data was collected. During transitions to a new version of ISO 9001, the official ISO Survey presents the data, and it did so with the last report issued a few months ago. In that report, ISO clearly distinguished between the certificates issued against ISO 9001:2008 and those for ISO 9001:2015. Here’s a screenshot of that report:

The official ISO Survey (which you can download here) thus claims that in 2017 — the latest figures anyone has — only 42% of certificates were issued to the new version of ISO 9001, with a whopping 58% still lagging behind with ISO 9001:2008 certificates. If we were to assume that 100% of all the ISO 9001″2015 certificates were issued to upgrade clients, and not a single one was a company obtaining certification for the first time, then it’s still a far, far cry from IAF’s claim of “93%”.

There is a possible explanation: the IAF has somehow obtained more recent data on its own than what ISO itself had gathered using research firm AC Nielsen, which gathers the official ISO Survey data. That’s unlikely, since it would require the IAF to force ABs to then force their CBs to provide the data, something the IAF has never been wont to do. But let’s say they suddenly, after decades, found the stomach to do their one job and monitor these things, even then it means that somehow the IAF received more accurate and current data than even ISO itself. Given that ISO routinely publishes numbers that change every year (current reports often provide different national totals than those reported just the year prior), which ISO blames on inconsistent data provided by untrustworthy CBs, all of this seems unlikely.

Instead, what’s more likely is that as part of its “CertSearch” database project, the IAF has started gathering the CB data in order to begin populating the database. The CBs have been loathe to give IAF this data, as they have fought off any attempts at universal certification databases for decades, claiming that rival CBs will use the data to poach clients. If the IAF is already publishing irresponsible press releases from this data, then the CBs fears will be borne out, which is likely the best explanation here. The IAF couldn’t help itself but run some bullshit story about 5 minutes after the CBs begrudgingly began reporting some data. But that would make it literally true that this is the “first time” the IAF gathered the data, rather than ISO and AC Nielsen.  So this seems to be the likely source of the article.

Which means, to you CB reps reading this: the IAF has already telegraphed it intends on using your data to promote itself, and doesn’t care what you think. They have no intention of being careful responsible custodians of the data. Consider that when handing over that data. But those of us on the outside knew that already, because IAF is a shithouse.

We do know the data is incomplete, however: the IAF CertSearch project is wholly voluntary, and IAF has no expectation of full participation by its AB/CB attendants. In fact, it is only claiming it will house data for 700,000 certificates, for all standards, not just ISO 9001. And that goal is for when the database is released, meaning any data it has now is a tiny fraction of the 700K goal.

In short, there’s no way that IAF’s claim is true, because there’s no way the IAF even has any accurate data to support it. This is why the press release didn’t link to any data or even cite actual figures. Someone made up a graphic of the number “93%” and hit the publish button.

Until the IAF is subjected to proper oversight and independent scrutiny, which probably will only come by way of subpoena or regulatory intervention, you can expect more of this irresponsible fictioneering, not less.

The IAF should be examining why its logo keeps appearing on certificates issued to companies involved in huge scandals and disasters — the most recent being United Microelectronics, which was indicted on conspiracy to steal US trade secrets for China — but I assume there’s no time left after IAF tasks its people to make really, really big graphics showing a giant-font “93%.”

I contacted IAF about their claims and asked for the supporting data, but so far have not heard back.

UPDATE 4 December 2018: The IAF has elected not to respond at all to a request to provide the data supporting their claim.