The UKAS-accredited ISO 9001 registrar Centre for Assessment (CfA) is operating a preferred consultant program which then offers various discounts to the clients of such consultants, in apparent violation of ISO 17021-1.

CfA’s “Directory of Consultants” program requires potential member consultants to agree to either submit its clients for certification audits to CfA, or attest that they have already done so. In exchange, CfA grants various “benefits” to the consultant’s clients, including a 10% discount on initial ISO certification audit fees.

ISO 17021-1 strictly prohibits such conflicts of interest, demanding that accredited bodies such as CfA by requiring registrars to “take action to correct inappropriate claims by any consultancy organization stating or implying that certification would be simpler, easier, faster or less expensive if the certification body were used.”  Under the program offered by CfA, it is actively endorsing this practice, giving permission for its “preferred” consultants to openly declare that using CfA would be “less expensive.”

A “Guidance” document for member consultants is currently at revision 2, and dated May 1, 2020, but it is not clear how long the program has been running. The document’s metadata shows it was written by CfA’s Head of Business Development, Richard Hamilton. 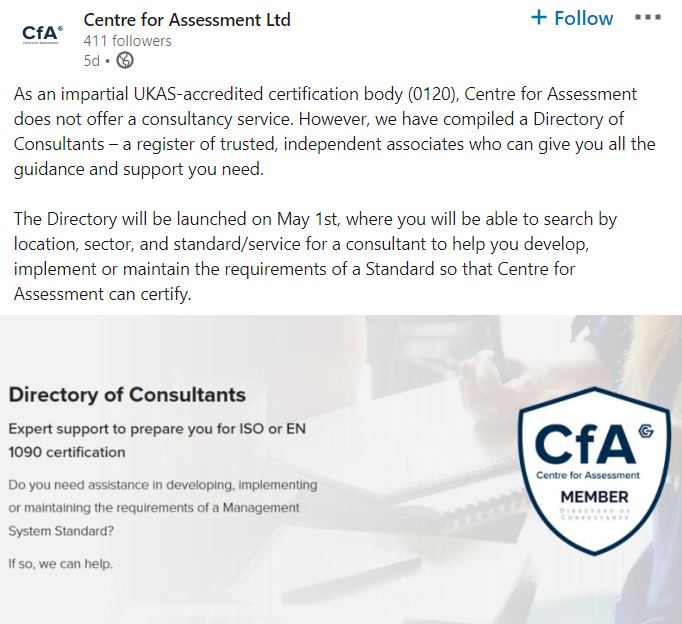 Oxebridge has filed an official complaint with CfA alleging eight different violations of its accreditation rules under ISO 17021-1, and copied UKAS, the IAF regional body EA, and the IAF itself. A copy of the full complaint may be read here.

The scheme was reviewed by our impartiality process before launch and we are confident that there is no violation of ISO 17021.

Oxebridge also alleges one additional violation of ISO 17021-1 as no public-facing procedure related to complaints handling could be found on the CfA website.

Historically, UKAS and the IAF have refused to enforce accreditation rules against such collusion between consultants and certification bodies, while nevertheless not having the rules removed from the accreditation standards. The result has been a growth of what Oxebridge calls “pay to play scams” which reduce the validity of ISO certifications be rewarding conflicts of interest.

Typically, UKAS defers to claims made by CBs that they have conducted a “risk assessment” of the conflicts, and accepts this on its face. The bodies never provide any evidence that the risk assessments actually occurred, nor how they can justify the obvious contradictions of the accreditation rules, citing “confidentiality.”

Oxebridge is now pursuing legal avenues within the United States to open the records of such investigations.