Six Weeks in the Life of Oxebridge 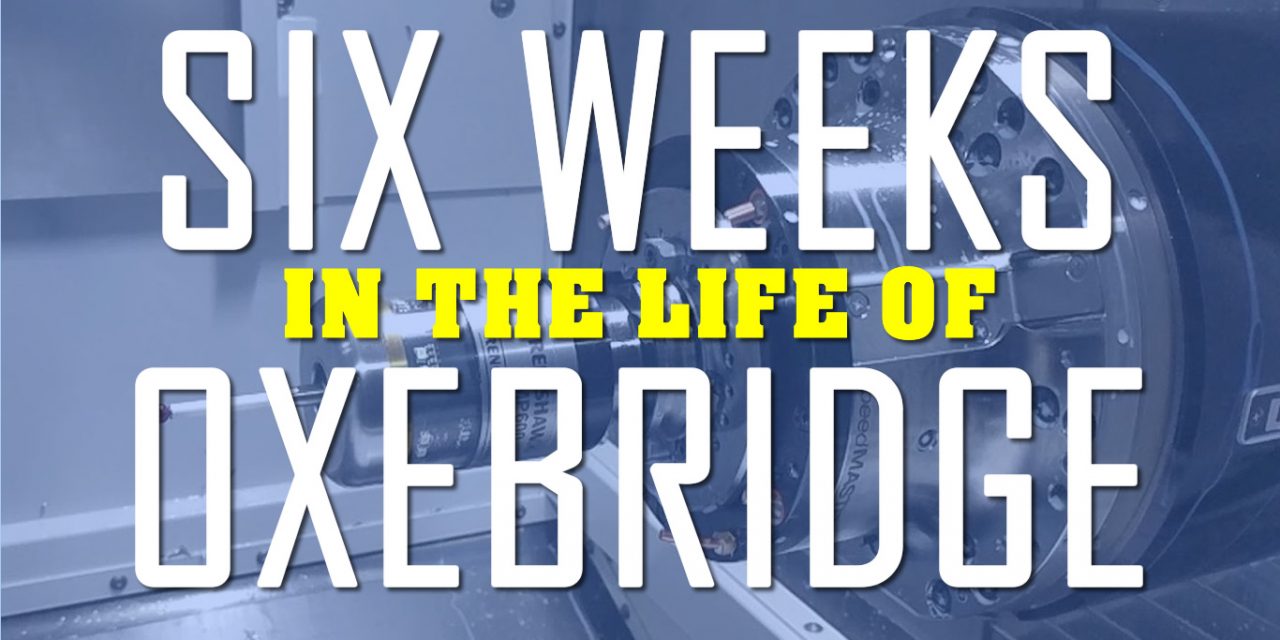 I thought it might be a nice change of pace — and, perhaps, informative — if O-Fans had an insight into the daily workings of Oxebridge. Or, at least, weekly. So here’s a slice-of-life post revealing what six weeks are like in the typical Oxebridge world.

Flying in from Peru (where I live), it’s off to the Land of Fake Burritos and Real Scorpions to begin a truly Rapid AS9100 Implementation as a high-tech manufacturer of aircraft parts. The client is a small shop, less than 10 employees, but runs fully-automated manufacturing allowing CNC machines to run unattended for days on end, as they pump out hundreds of complex aluminum or steel parts.

The company had nothing in place, and wanted AS9100 in a few months in order to meet a Boeing requirement, so it would required a compressed implementation. Phase 1 of the AS9100 implementation would be 8 days on site, writing their QMS based on actual interviews and their current practices. 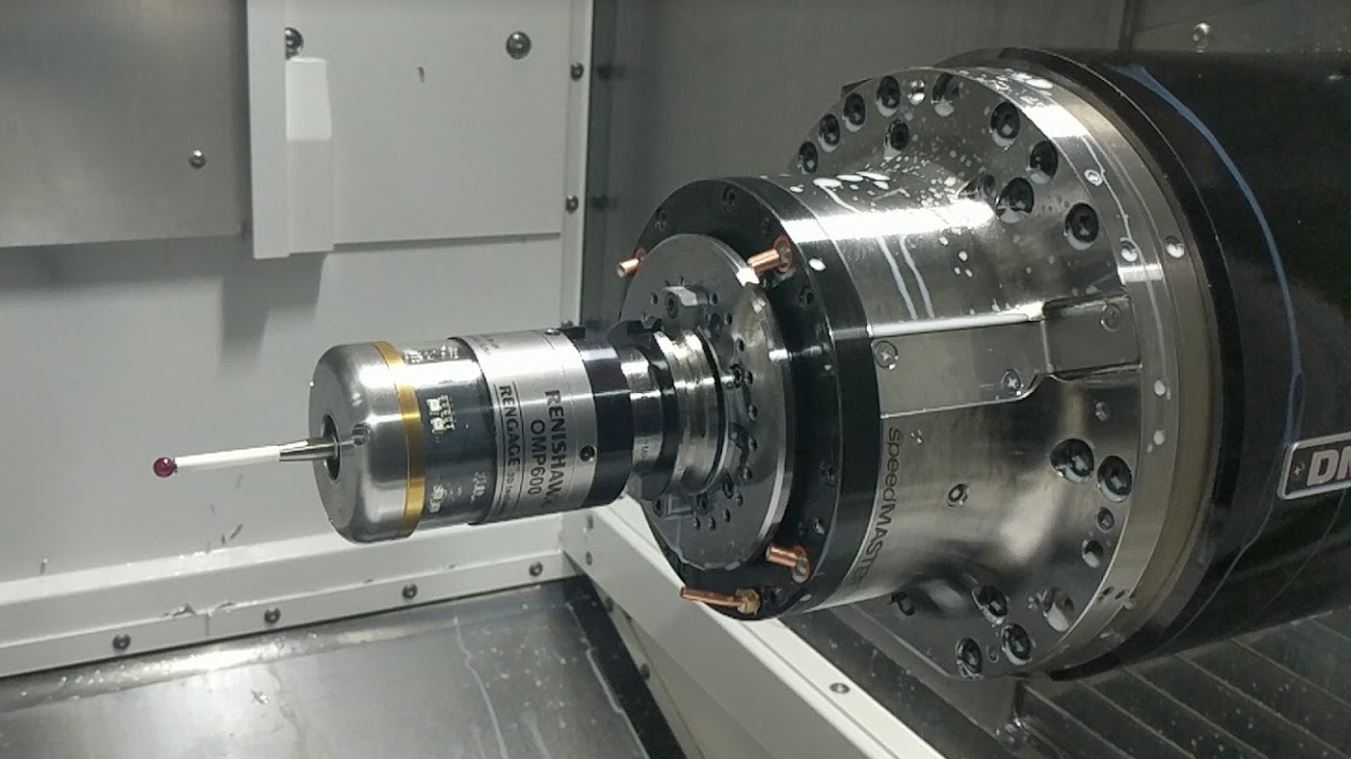 This would prove to be eye-opening for me, as I had never seen true “Industry 4.0” manufacturing in real life. These high-end DMG Mori CNC machines not only pumped out parts with astonishing accuracy, but had in-machine probing that largely replaced the need for in-process inspections. humans still came in with sampled inspection and CMMs for First Articles, but otherwise, the output was astonishing given the low employee count.

Being so close to Honeywell and Boeing, I also arranged some off-time to meet with reps from both companies. I met first with two Supplier QA reps from Boeing Distribution Services — one of the only Boeing companies that is actually AS9100 certified — and we talked about the problems facing AS9100. They were not amused.

Next it was a longer meeting with a Honeywell quality rep, a friend of mine for some time. He’s no fan of the As9100 scheme, either, and we got into more specifics of the certification scheme’s problems.

In short, the aerospace primes aren’t thrilled with either AS9100 the standard (they loathe “risk-based thinking”) and think the certification audits have been reduced to a very expensive joke. None of this information, however, appears to be making its way through Honeywell or Boeing into the AAQG or IAQG, however. The Boeing reps at IAQG especially appear to be wholly uninformed on what their own quality reps think of AS9100. 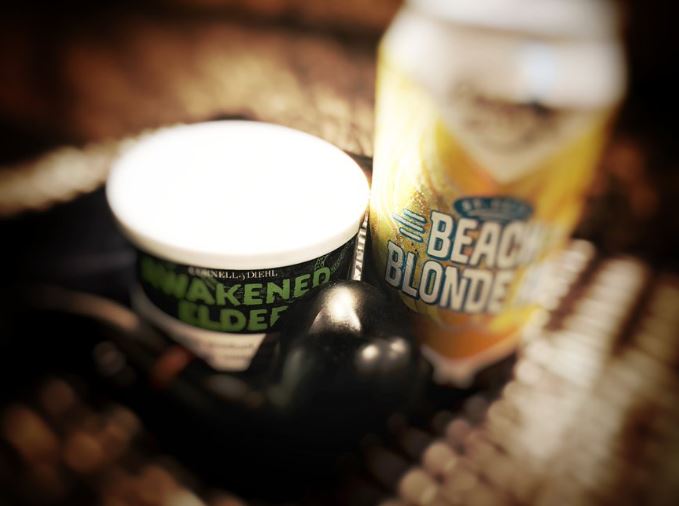 As I said, Phase 1 of the Rapid AS9100 Implementation was eight days, so I remained in Phoenix over the weekend to continue the work into a second week. The weekend itself consisted of sipping Beach Blonde Ale outside the Hampton Inn while enjoying Cornell & Diehl Awakened Elder or Chocolate Cavendish, with a few trips to local points of interest. And doing laundry. Yay.

Week Two at the client just saw us finalize the QMS documentation, create (from scratch) a functioning Corrective Action Request system, develop an internal audit program, and come up with a new form of travelers (the old one wasn’t working.)

Since this was only a three-day work week, the rest of the week was spent on Oxebridge article writing and ISO Whistleblower investigations. In addition, there was a lot of prepping to do for the ongoing lawsuits against various internet trolls, and reviewing the next batch of court filings.

Next it was off to a town north of Atlanta, for a company that fabricates aircraft interiors. This client was already further along on their AS9100 implementation, so the week was spent on internal auditor training and conducting the internal audits themselves. 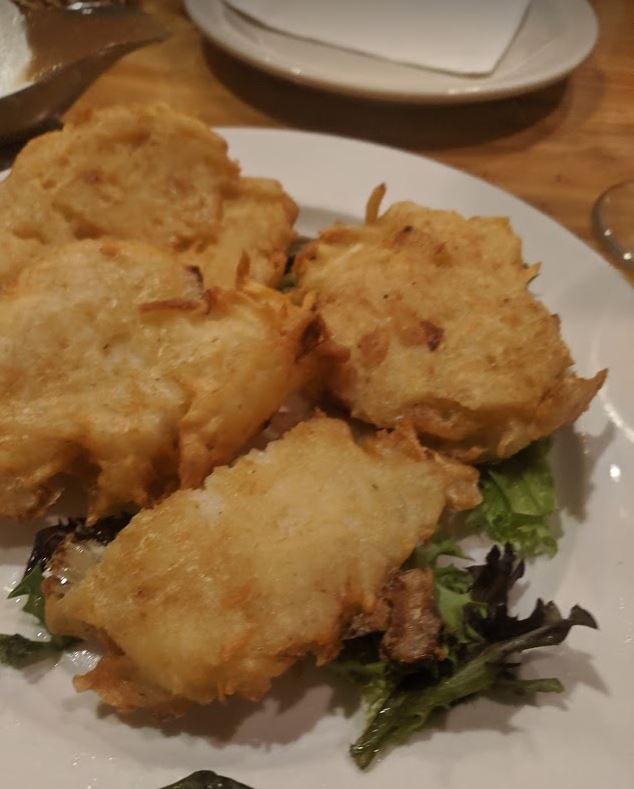 With no hotels in the client’s actual town, I stayed instead in Helen GA, a weird Germanic recreation village where all the shops and buildings are designed to look like Germany. It’s very kitschy, to be sure, but I do love German food, and at nearly daily at the fantastic Bondensee Restaurant. I’m addicted to proper German potato pancakes, thanks to my grandmother who escaped Nazi Germany and taught my mother how to make them. The Bodensee offerings were fantastic, and every single entree I had there was equally fantastic, with my favorite being the Hauspfaennle.

With internal audits done, we performed a management review and set the stage for the company to undergo its final AS9100 audit by their selected registrar in a few months.

The next week was supposed to be for a firearms manufacturer, but they had a scheduling conflict so had to cancel. I was able to schedule some smaller Florida-based clients to fill the gaps, fortunately, so the week wasn’t a full wash.

First up was intended to be a tw0-day visit to conduct internal audits for a Sarasota manufacturer of helicopter avionics and mapping systems. The company was in good shape, however, and we completed the entire audit in one day (they are tiny). I opted not to charge them for the second day since they are a client of mine going back to 2011. I got to visit some family while in the area, so that was nice.

At the end of the week it was off to another tiny (one man!) shop in Deland FL, also for routine internal audits. Again, no major issues found and the auditing was simple. 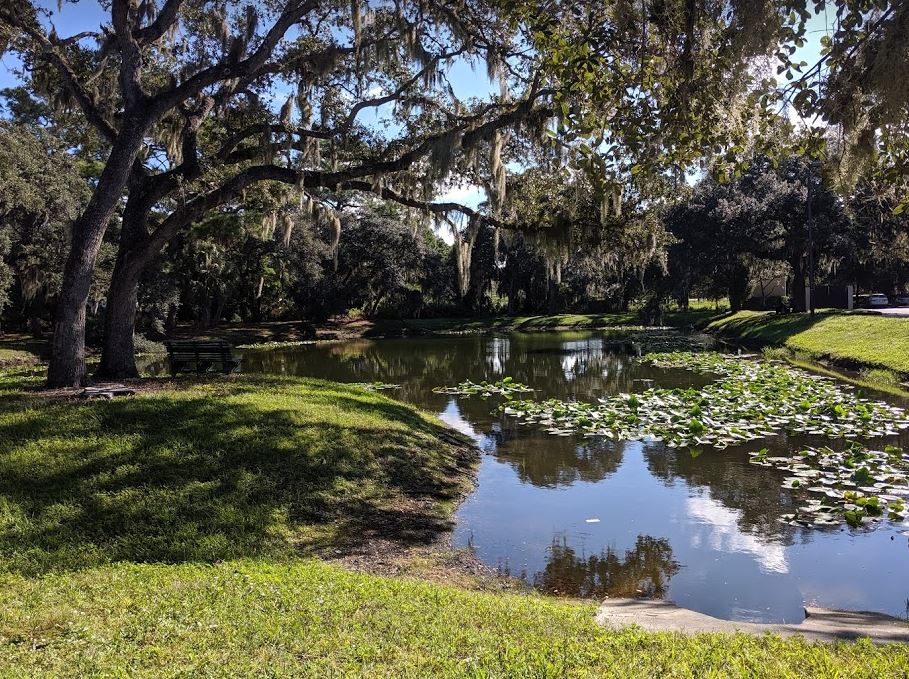 I deserve credit, however, for resisting entirely the urge to attend the 2019 Disney World Food & Wine Festival. Despite wanting to go in order to report on the year’s wine offerings on my sister blog, Winepisser.com, I just couldn’t pull the trigger. Last time I went I got halfway through the wine tastings and was so blotto I couldn’t drive, and as I get older, I dislike that sensation less and less. Disney has also jacked up the prices for a single-day visit to excruciating levels, and walking around by yourself at Epcot is never much fun. Next year I’ll plan better, and meet friends or something.

I did, however, stay in Orlando near I-Drive, which is always high-energy. During that time I got notice that I finally made Hilton Honors Lifetime Diamond status, because I essentially live in Hilton properties half of every year. Presumably I have a cool black card waiting for me in the mail somewhere. I didn’t know you could get “Lifetime” Diamond until I noticed an auditor from TUV SUD carrying it, and he told me how to get it. Now I can’t lose my points even if I take some time off from travel, which is unlikely.

For the fifth week it was back to Phoenix to finish up the Rapid AS9100 Implementation I had begun at the launch of this trip, with the high-tech Industry 4.0 company. As usual, the first day was dedicated to classroom-set AS9100 internal auditor training, and the rest of the week was dedicated to doing the audits themselves. We fit in a full management review at the end of the week, and the company is now ready to undergo their audit. 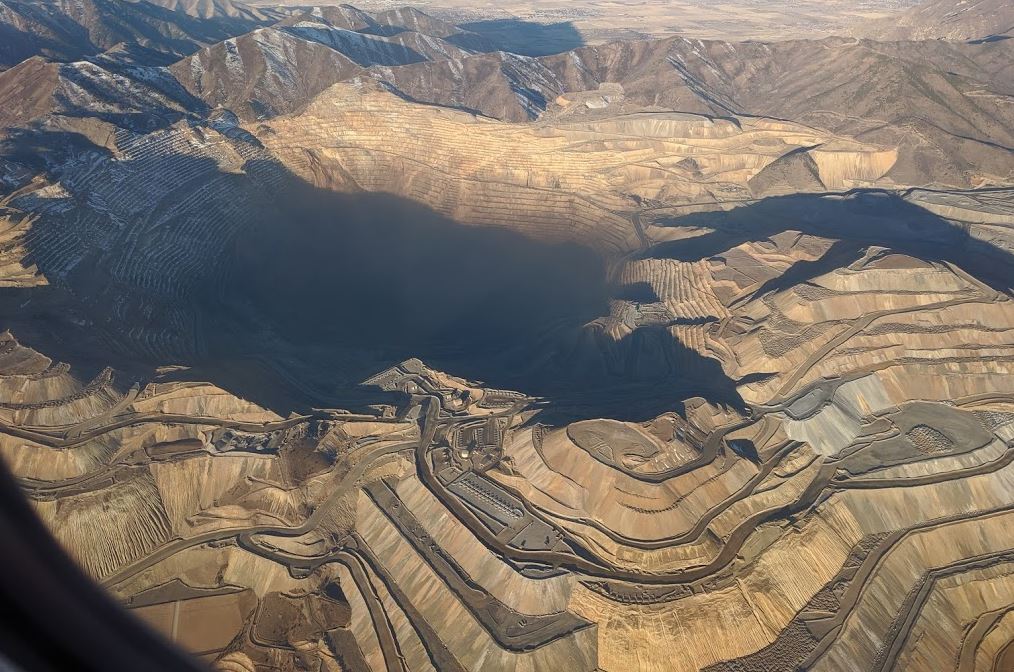 View of massive Colorado mine on the flight to Denver.

During this week, a lot of aerospace shit hit the fan; multiple new ISO Whistleblower reports came in, prompting more investigations, and the Probitas debacle reached a bizarre speed bump. If you recall, Probitas took the position that aerospace auditors lying about their employment history is fine, provided they do it after they get certified and are actively using the Probitas logo on their resume. I’m not sure where Probitas and SAE think they are going with this, but during this week I had more opportunities to talk to high-ranking industry reps, and they are universally straddling a position between baffled and enraged. Again, these companies have reps on the IAQG, so it should lead to some interesting conversations at the next meeting.

This week also saw some movement on my plans to provide more industry information to a various US government agencies. First up will be NASA followed by a report to the FAA Inspector General, which will now include the latest decisions by SAE/Probitas, as well as some equally damning activities by the usual accreditation oversight bodies. These agencies — as well as two others that I’m in conversations with — are leaning heavily on the validity of AS9100, but also keenly interested in knowing where their money is going. Waste, fraud and abuse, as they say. 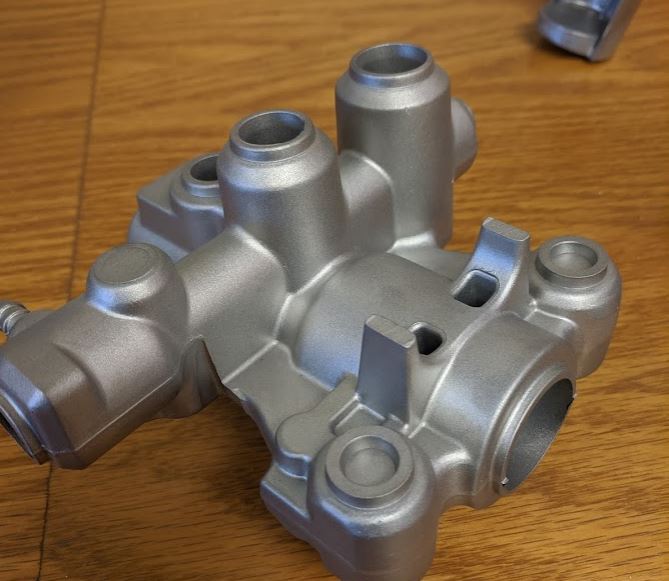 Finally, it was off to Denver to conduct a round of internal audits and general consulting for another previous client. This entire 6-week trip was unusual because I do very little contract internal auditor work, our philosophy being that we should leave our clients with all the training and resources they need, without hooking them into some wonky “subscription service” afterward. So this was all coincidence.

The Denver client had brought me in for AS9100 implementation back in 2016, but due to plant reorganization, staffing changes and other real-life issues, never scheduled their audit. They needed me to come back in, refresh their internal audits, and provide general consulting to get them back on track.

A provider to Safran (formerly Zodiac Seats), their customer was hammering them hard on finally getting AS9100 certified, so it was all hands on deck for the week. With a third party CB audit scheduled for December, we’d have to be sure to not only find all the problems, but close them out, too.

Finally, after six weeks, it was back home to Lima. In my absence Peru’s President had disbanded Congress and called for new elections, and the country just dodged a full-blown military nightmare. Tanks could have been rolling in the streets, but the military sided with the President and peaceful elections are planned. But it’s always a razor’s edge that one walks in South America.

After a few weeks here, I’ll return to the US for the firearms manufacturer and a few smaller clients, then it’s onto the Christmas season when things die down until next year.