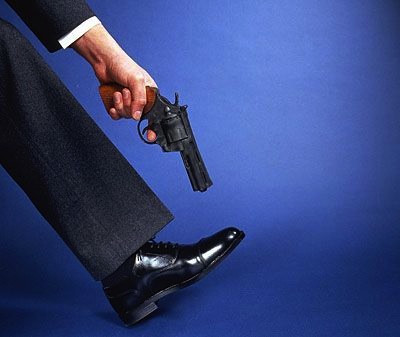 This was bound to happen. Presumably watching as ANAB and Smithers invented SN9001 from thin air, certificate mill operator Daryl Guberman and his partner organization Industrial Leaders Group — a paid press release distribution service and “publisher of over 192 specialized industrial directories as well as several B2B marketplaces” — has launched “ARM9009” a standard that alleges to ensure the quality of firearms and armor manufacturing.

ANAB had previously attempted to certify body armor manufacturers with BA9000, a scheme which appears to have generated exactly one client. The lines between the IAF signatory ANAB’s stunts and those of self-accredited bloviator Guberman are now becoming so blurred, it’s hard to tell the difference. It’s likely, though, that ANAB is the only one making money. In ANAB’s favor, however, it’s also likely that more people are likely to be killed by faulty weapons “certified” by Guberman than falling on the ice under an SN9001 certification. So there’s that, at least.

The ARM9009 rollout is nothing if not hilarious. First, Guberman et al won’t publish the standard. You can’t download it, nor even buy it before contacting Guberman and undergoing his indoctrination spiel. Says the ARM9009 website:

Due to the sensitivity [sic] nature of products produced and in compliance with all state, federal, government(S)  [sic] requirements.[sic]  ARM-9009:2013 will not be a public domain document.

If anyone does manage to get a copy, send me it, since it’s likely a treasure trove of ISO trademark and copyright infringement.

If you’re a lover of the opposite of subtlety, you will want to rush quickly to the dedicated ARM9009 website here, just because the background video shoots you in the face. That’s welcoming. ABAC’s spokesman “James Harper” in “Washington DC” at a “podium.”

Next, Guberman recruited an awkward guy named “James Harper” — the same name of the fictional reporter on HBOs’ The Newsroom — to stand in front of an amateur green screen, in a shockingly disastrous video that pretends to be an actual Washington DC press conference. Harper poses behind a computer generated podium, apparently hovering his hands at his belly (since there’s no real podium), in front of a computer generated background, while CGI “flashes” give the vague impression of a media event, with all the convincing realism of a 1980’s GI Joe cartoon. Harper claims to represent an accreditation body, but cannot pronounce the word “registrar” (he says “register.”)

The usual Guberman/Don Labelle exaggerations and untruths are in play here. The previously unheard of American Board of Accredited Certifications is suddenly “the world’s leading firearms and armoring accreditation & certification body“. The ARM9009 certification is announced as mandatory for “all manufacturers, suppliers, subcontractors involved in manufacturing firearms or armored systems.” And of course, “ARM-9009:2013 certification/accreditation is solely administered by G-PMC, LLC and is overseen by (ILG) Industrial Leaders Group and the American Board of Accredited Certifications” all of which are operated or managed by Daryl Guberman in one capacity or another.

It gets worse. In a press release distributed through Industrial Leaders Group, an ABAC spokesman Henry Kroger makes a remarkably unsupportable claim:

Henry Kroger… said only qualified firearms manufacturers with a quality management system in place that meets specific ARM 9009 principles and guidelines can achieve certification. He stated companies must then be approved by ABAC™ Board of Advisers which oversees all certification bodies (registrars) that are authorized to issue ARM 9009 as a duel accreditation with ISO 9001:2008. “By the end of next year if a firearms manufacturer has not achieved ARM 9009 certification, it’s more than likely the company either failed the qualification process, or it simply declined to comply to the latest standard in firearms manufacturing.” said Kroger.

There’s another possibility entirely: maybe not all gun manufacturers are stupid assholes who believe what they read on the internet.

But this move may have been one overcaffeinated step too far, since firearms are highly regulated, and issuing dubious self-accredited certificates against a standard that may not even exist could put Guberman and his pals in violation of Federal firearm laws and the BATF. At the very least, the false claim that all firearms manufacturer must be accredited to ARM9009 is grossly deceptive and likely a serious violation of FTC rules against deceptive advertising and antitrust fraud. It’s illegal to tell an entire industry that a requirement is “mandatory” if, you know… it’s sort of not. Back when ANAB and Smithers announced their insane SN9001 plan, I warned that this would result in a dilution of the ISO 9001 value and market, reducing it to parody. Now, through their impossibly stupid actions, ANAB has emboldened the very idiots who will eventually put them out of business: the unaccredited certificate mills.

If ANAB and the IAF — both run by the same guy — had taken their responsibilities to their clients, stakeholders and the public seriously, this might never have happened. Now we have self-accredited nutjobs certifying gun manufacturers for God’s sake, by following a model put forth by ANAB, making the photo at right both ironic and meta.

More on this as it develops.