Report: TC 176 Views ISO, Itself as Customers, Not Standards Users

A leaked set of minutes from the October 2022 ISO/TC 176 plenary session reveals that the committee responsible for ISO 9001 does not view the people and companies that buy the standard as their customers, instead designating itself and the ISO Central Secretariat as such.

TC 176 is responsible for the ISO 9000 series of standards, including ISO’s flagship standard, ISO 9001. The minutes reveal a change in focus for TC 176, as it further ties itself to the business mission of ISO as a publishing company, rather than adopting a “customer focus” as — ironically — called out by the ISO 9001 standard itself.

The leaked document shows the “ISO Secretariat” and “TC 176 Members” themselves listed as customers. Actual users of the ISO 9000 standards are relegated to a lower designation of “interested parties.” 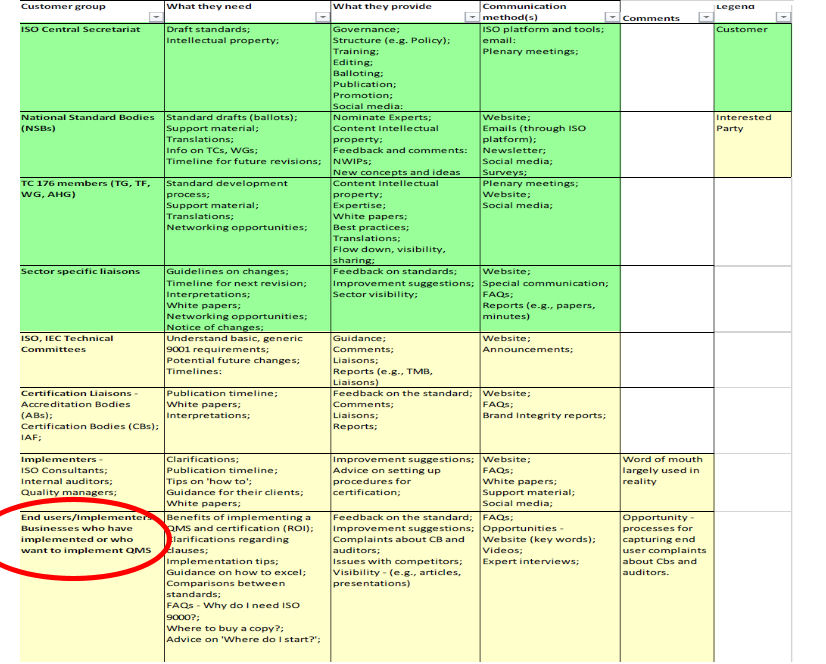 The slide deck was presented by Ashok Dandekar and Alan Daniels, the latter of whom is also chair of the US delegation for TC 176. Daniels is also a key participant of the IAQG committee that develops the AS9100 standard, developed not by ISO, but the International Aerospace Quality Group (IAQG). The IAQG has historically taken the position that its customers are the aerospace primes, such as Boeing — where Daniels works — and not the companies that buy the AS9100 standards or audits. Ironically, Boeing does not implement AS9100 in any of its companies.

The IAQG mindset has now taken over ISO, as TC 176 refocuses its attention away from paying customers and back onto the ISO headquarters. This view is not consistent with prior years, when TC 176 did view users as its customers. It is not clear if Daniels himself carried this new view over from his work at IAQG, or if this was a mandate from ISO headquarters in Geneva.

Other “customers” indicated by the slides include national standards bodies and “sector-specific liaisons” such as IAQG. Despite these bodies not actually buying standards, nor audits, they are given a higher classification than actual users.

The shift not only explains TC 176’s often dismissive, if not smug, attitude towards end users and paying customers, but also provides them with official “cover” when ignoring user feedback. The ISO 9001 standard demands that organizations obtain and react to customer feedback; by relegating paying customers to the lesser “interested party” status, TC 176 can now justify why it does not concern itself with such feedback. Instead, TC 176 prioritizes the dictates of the ISO home office, which are related to improving the sales of ISO products.

The revelation further erodes ISO’s claim that its standards are intended to “facilitate trade” between organizations, since its goals are now officially aligned with that of ISO as a publishing company, and not the needs of organizations that buy ISO 9001.