Board member Regan Edens has resigned from the CMMC Accreditation Body after he publicly attacked a member of the CMMC-AB’s own Industry Advisory Council (IAC) for questioning him about conflicts of interest. The move came two hours after Oxebridge founder Christopher Paris filed a letter with the DOD’s CMMC Program Management Office and CMMC-AB leadership demanding his resignation.

Regan’s company DTC Global began advertising a coming 5-day “CMMC Bootcamp” while prominently featuring Eden’s photo in the advertising for the event. This prompted howls of protest from multiple readers on LinkedIn, and eventually a post by Jake Williams, of the IAC. Williams wrote:

“One of the world’s leading expert in CMMC standards.” Is this because you are chair of the CMMC-AB standards group? If so, this means that you are profiting from your position on the CMMC-AB which is in direct violation of the CMMC-AB COI.”

In response, Edens attacked Williams, calling him a “troll” and suggesting his only experience in the defense industry was playing Call of Duty. 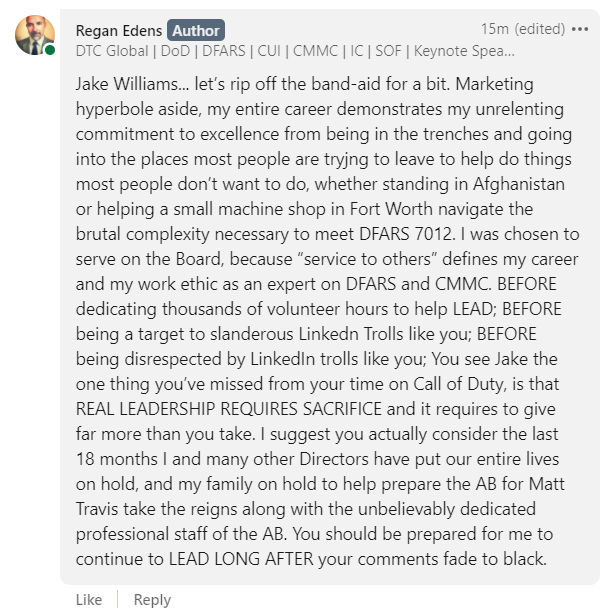 The post prompted Oxebridge founder Christopher Paris to write to the CMMC-AB and Dept. of Defense demanding Edens be “removed from the CMMC-AB soon as possible.” Paris wrote:

Not only was Edens responsible for the disastrous claim at a prior town hall that “100%” of work from home employees would have to undergo home inspections for CMMC compliance – a violation of the Fourth Amendment – he has continued to rake in profits through is various CMMC related companies, in violation of the AB’s Conflict of Interest Policy.

Now his recent training event – for which Edens is charging $100 per head and advertising it using his CMMC-AB role — has even earned questions from Jake Williams, who sits on your Industry Advisory Council. Showing the usual lack of professionalism and restraint, and in full violation of the AB’s Ethics policy, Edens publicly attacked Williams, calling him a “troll” and suggesting his knowledge of defense was limited to a video game. Again, he did this in public.

The DOD CMMC Program Management Office’s Stacy Bostjanick immediately replied, by declining comment while nevertheless acknowledging that both “the AB and the PMO have active investigations ongoing” into Edens.

About two hours later, multiple sources reported they had received messages from Edens announcing he was ousted from the AB. The posts advertising the CMMC Bootcamp also disappeared from LinkedIn. The next day, however, Fedscoop announced Edens had “resigned.”

Edens had been operating two companies that profited from his work on the CMMC-AB. The first, CUI Supply, sells $185 CMMC compliance “sticker packs,” and would have benefitted from his claims that work-from-home staff would be required to comply with “100%” of the CMMC controls. That would have forced homeowners to find ways to identify controlled unclassified information in their homes, such as through the sticker packs sold by Edens.

This arrangement went on for many months and was the subject of major ethics complaints filed by Oxebridge with the CMMC PMO and the DOD Inspector General. Eventually, Stacy Bostjanick announced she had opened an investigation into Edens, as well as conflicts by other members. For months, however, there was no update on any progress, and the conflicts of interest continued unabated.

To date, nearly every CMMC-AB Board member has been found engaged in some form of COU that raises questions on the CMMC-AB’s ability to fairly and objectively carry out its duties:

The public nature of Edens’ attack against the AB’s own Industry Advisory Council was likely a bridge too far, even for the CMMC-AB leadership.

In a recent CMMC-AB Town Hall, CEO Matt Travis suggested the problem was not with his Board, but with the public’s understanding of the AB’s conflict of interest policy. Paris accused Travis of “attempting to gaslight the public” with his comment. “People know conflicts of interest when they see them.”

Ironically, his departure from the CMMC-AB allows Edens the ability to sell CMMC products and services without any restrictions, as he no longer has a conflict of interest. His role at the AB was limiting his ability to generate revenue, and those limitations are now lifted. Edens will be able to legitimately market his products as being developed or supported by a “Former CMMC-AB Board Member.”

The CMMC program has been plagued with scandals. Oxebridge was first to report that the DOD’s lead on the program, Katie Arrington, had been removed from her position. A recent Bloomberg article revealed the departure was over a report that she may have leaked classified information while working for DOD.

Arrington’s lawyer, Mark S. Zaid, has since threatened to sue Oxebridge in a bizarre set of tweets made on 29 June.

To date, Oxebridge has filed a total of 21 ethics complaints, whistleblower reports, and formal reports related to CMMC, submitting these to government agencies and Congress. Many of these were on behalf of industry whistleblowers utilizing Oxebridge’s ISO Whistleblower Reporting system.

CORRECTION 30 June 2021: A prior version of this story indicated that Board Member Akin Akinbosoye provides CMMC readiness seminars and other services through his company MxD, and suggested this was a conflict of interest. A source familiar with MxD subsequently explained that the company operates under official recognition of the DOD, and that this arrangement does not represent a conflict of interest. The story has been edited while Oxebridge continues to look into the role of MxD and Mr. Akinbosoye.