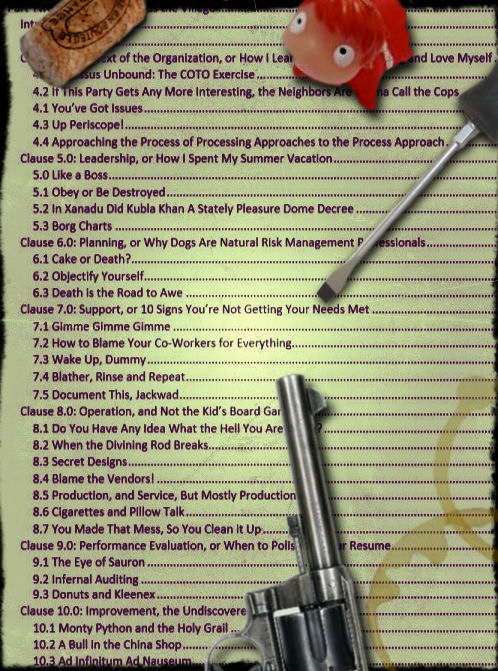 Oxebridge founder Christopher Paris has announced that plans for an update to Eyesore 9000: A Smartass’ Guide to ISO 9001:2008 have been tabled, meaning the popular parody document will not be updated to reflect the ISO 9001:2015 standard. Paris had begun work on a new edition of “Eyesore 9001:2015”, but has since stopped work on that document in preparation for his new book Surviving ISO 9001:2015: What Went So Terribly Wrong With the World’s Foremost Quality Management Standard and How to Implement It Anyway.

Surviving ISO 9001 was originally intended as a fully serious book, but Paris said, “the humor kept on creeping in more and more” and soon much of the content of what was intended for “Eyesore 9001:2015” wound up in the new book instead. As a result, Surviving ISO 9001 becomes “the first dead serious hilarious implementation guide of ISO 9001, presented with dead serious hilarity,” Paris says. It is also likely to be the first ISO 9001 book ever published with an adult language warning.

Paris recently leaked a shot of the table of contents for the work-in-progress Surviving ISO 9001, which seems replete with the sarcasm and fandom callouts which had featured prominently in Eyesore 9000 and its aerospace followup, DumbAS9100. Collectively, Oxebridge reports the two documents were downloaded over a quarter of a million times, worldwide. They are still available for free via via this link.

Surviving ISO 9001 is a practical implementation guide for ISO 9001:2015, but at least one third of the book is dedicated to the backstory behind how ISO 9001:2015 was developed, and “how it got so terrible,” Paris explains. This, Paris says, is important because “knowing the context of how ISO 9001 was written, and the thinking in the minds of its authors, is the only way to know how to implement the requirements themselves.” Paris has criticized ISO TC 176 for making ISO 9001 needlessly complicated, and blames much of that complication on political maneuvering and incompetence of the TC 176 authors themselves. The book is a product of hundreds of hours of interviews with ISO leaders, TC 176 contributors and quality professionals from around the world.

The other two thirds of the book are dedicated to interpreting and understanding each clause of ISO 9001:2015, and then an implementation guide that walks users through a best-practices implementation model. “The fourth third,” Paris says, “are the jokes.”

The new book is already selling at a rapid pace, without having been released; Paris launched a “Pre-Order Edition” offer that allows early buyers of the book to save 50%, while giving them additional content that will not appear in the final edition. It is slated for a $60 release through Amazon later in the year.

Paris doesn’t rule out another edition of Eyesore 9000 in the future. “Doing another Eyesore 9000 now just means I have to come up with new jokes, rather than recycle the ones in Surviving ISO 9001. And that requires me to not be lazy, which isn’t happening any time soon.”